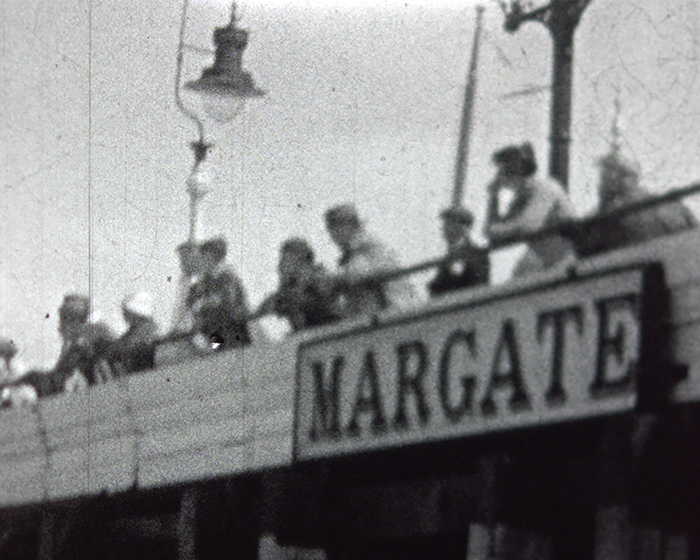 The film opens with the title, 'Westgate Holidays all spent with Mrs. Wilson Keelor'. Mrs. Newman and daughter Margaret are filmed in June 1936 leaving the house 'Violet Dean', where the family stayed, to head off to the beach. Beach scenes of Margaret and Mrs. Newman playing chase follow, and the two are shown taking a walk along the promenade. Mr. Newman takes Margaret for a ride on the boating lake, and the two wave at the camera as they ride by. In the next scenes Margaret rides on the merry-go-round at Margate's Dreamland.

In the following footage, the family board the paddle steamer 'Royal Eagle', from Margate to Ramsgate. Margaret is filmed sitting at the back of the ship looking out to see, after which there is a quick shot of the ship's captain. The footage of the Westgate holiday ends with further scenes of the family playing on the beach.

The next part of the film is from the following year. An intertitle reads 'Now we come to 1937, June 19 to July 3'. The family travel on the Royal Eagle from London to Margate. Margaret is seen playing on the beach with another girl. Margaret then carries her toy boat to 'the new boating pool' where she sails it. In the next scenes Margaret goes swimming in the sea with her father, and plays on the beach. The family then return to London on the Royal Eagle and a final title states that they go to on 'Wellingboro'.

The next intertitle states 'Mother & Father & Jagat Mehta come with us 23 July -6 Aug 1938'. The Newman family and friends are seen playing on the beach at Cliftonville. Following this, is footage shot in Dufaycolor film. During this film the the film-makers parents sit with the family on the beach in deck chairs whilst the children play in the sand. Next the film switches back to black and white, and scenes of boat racing shot in 1939 follow.