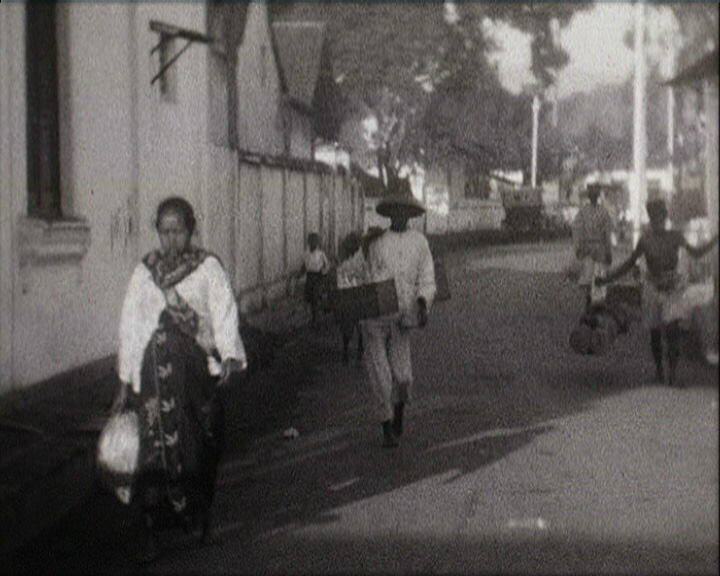 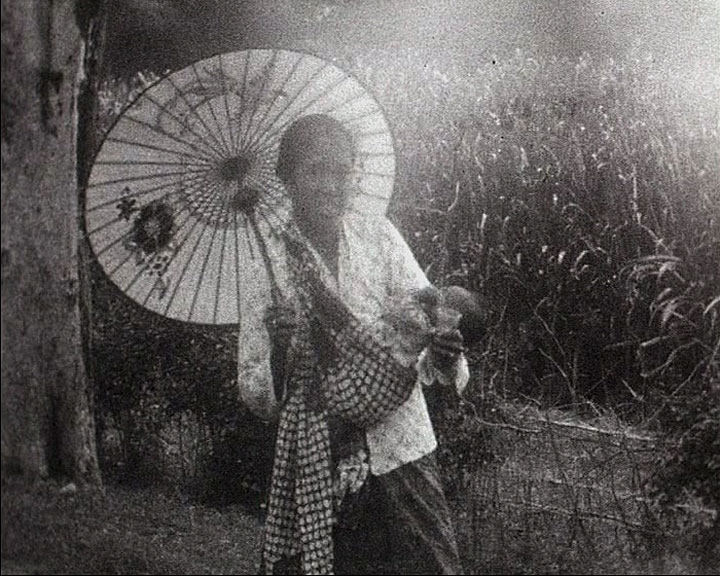 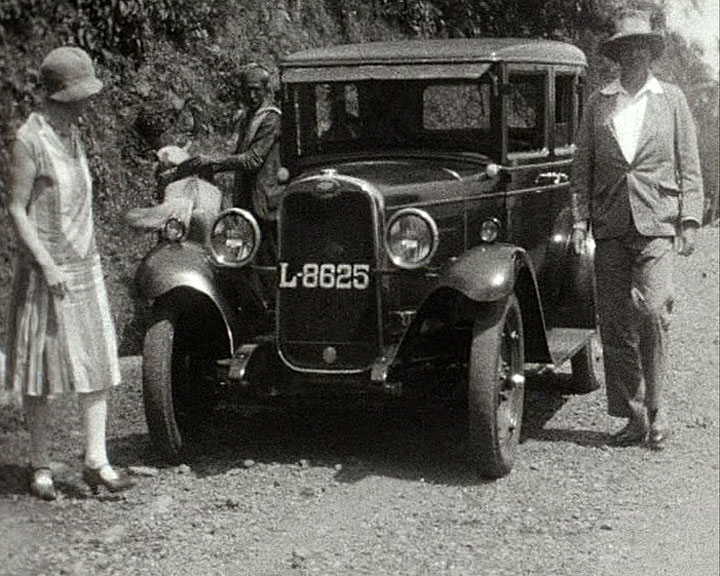 This amateur film with intertitles charts the motor holiday of a British couple to the Indonesian island of Jawa (Java). Whilst there they film the people, the landscape and excursions with other Europeans.

Indonesian men and women make wreaths in the grounds of the Tsisoeroepan Hotel; elsewhere young children dance to the music generated on wooden percussion instruments called angklungs. People go about their everyday lives in village streets, transporting themselves and their wares on a passenger ferry made from two dugouts, on horseback, in pony and traps, or by foot. Those who walk with their goods exhibit strength and versatility - one man carries logs suspended from a pole which stretches across his shoulders, another is hidden from view by a large rattan mat which he carries open over his head. A funeral procession comprised of male mourners passes the camera in Yogyakarta - on different street a mobile trader sells ice-cream in glass bowls. Agricultural workers are filmed labouring in the paddy fields and harvesting the tobacco crop. The camera also records the attractions of the physical landscape - the ancient Hindu temples of Borobudur and Prambanan nestle in the densely forested land. The final section of the film focuses on the Europeans who live on the island or who tour it. The Burne's join another family for a picnic at the Kadek Bodok waterfall - Indonesian people and ponies carry the necessary goods whilst a European woman struggles on the rocky ground. The Burnes end their film with images of themselves atop Gunung Bromo, an active volcanic mountain which is shown expelling steam from its crater. 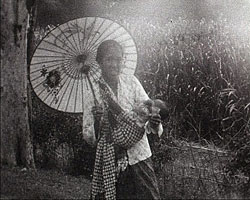 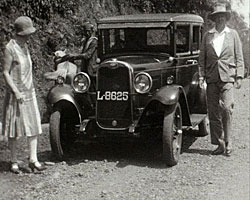 Java Tour. Christmas 1929. Batavia to Soerabaya en Voiture (1929) was filmed by doctors Thomas and Catherine Burne as a record of their holiday. Husband and wife both worked for the Colonial Service in Malaya, having moved out there in 1916. Thomas Burne, whose ancestral home was Loynton Hall in Staffordshire, worked as a surgeon whilst Catherine Violet ran a clinic for the indigenous population. The couple remained in the Malay Peninsula until the early 1930s, at which time they returned to England. The Burnes had three children, Diana, Thomas and Anne, each of whom went to boarding schools in England whilst their parents worked in Asia.

Screen Archive South East houses four Burnes family films. The films, which are essentially sequential, only span three years (1929 - 1932) but they provide an insight into the lifestyle of an educated, well-travelled and close-knit family. Despite a six week voyage and a job which only provided paid leave every three years, Catherine Violet Burne endeavored to return to England every Easter and/or Summer holidays in order to spend time with her children. Thomas Burne's responsibilities in Malaya meant that he was unable to return with such regularity. When they were with their children however, Thomas and Catherine Violet seem to have made a concerted effort to film them, producing two lengthy compilations [Summer Seaside Holiday And Family Scenes] (March - October 1929) and [Burne Family Pictures] (ca. 1930 - 1932). One can assume that they were made not only for posterity but for immediate reference for Thomas and Catherine Violet - the amateur film-making technology ensured that they would have moving images of their children when they were back in Malaya.

The Burnes also used their 16mm camera during this period to film two trips. The first [Boat Trip Along the Suez Canal: Port Said to Aden] (October 1929) records part of their return trip to Malaya after a summer spent with their children and extended family. The second film Java Tour. Christmas 1929. Batavia to Soerabaya en Voiture (1929) records their holiday to a local destination several months later. The latter film, with reference to the Screen Archive South East film [A Visit to Java, Bali and Sumatra, Angkor Wat and Bangkok] (1939), serves as a visual record of the increasingly tourist-friendly islands of Indonesia. These locales became much more accessible to Western tourists during the 1920s and 1930s. In many of these films the camera shows a clear fascination for the people who inhabit the region. However, some scenes appear contrived for the European tourists, or for the camera and such scenes expose the film-maker's 'Western Gaze' in focusing on images of otherness and the exotic.

Fashion Notes: The film shows Indonesians in national dress, including men in printed sarongs. It also provides an insight into the travel clothes worn by the British when abroad.

This collection of family papers dating 1314 - 1968, pertains to the Burne Family of Loynton Hall and is held at The Staffordshire and Stoke-on-Trent Archive Service: William Salt Library. The collection can be accessed via The National Archives' online database and from the William Salt Library Online Catalogue.
http://www.staffordshire.gov.uk/leisure/archives/williamsalt/home.aspx