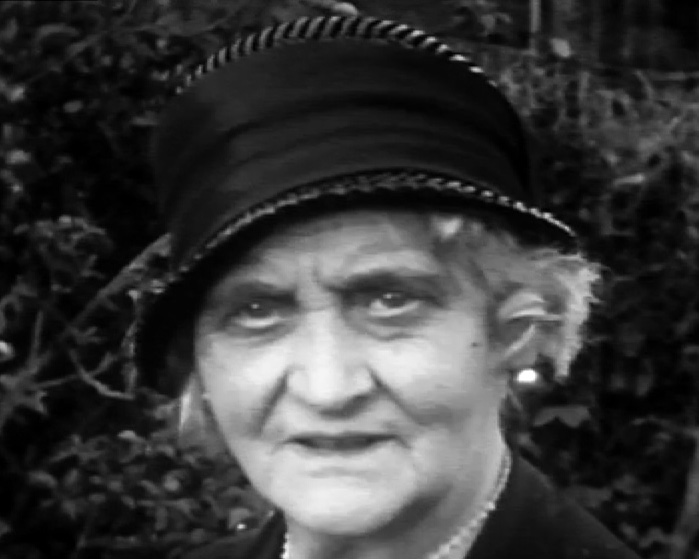 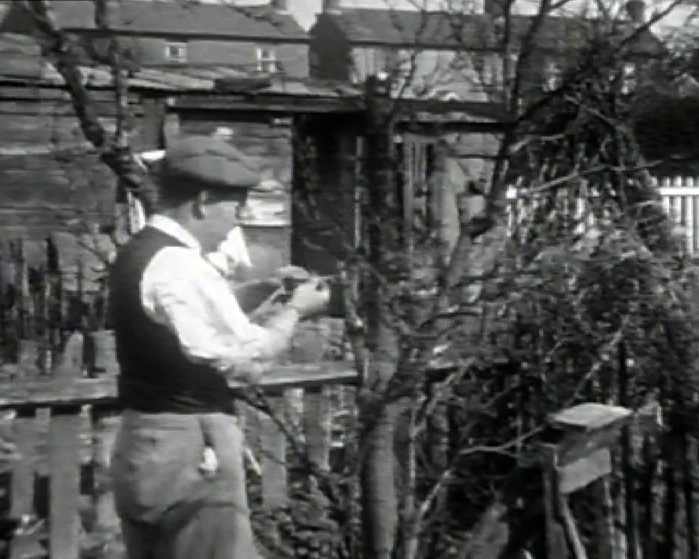 'Pathescope presents... "Samples" of Frimley Road Traffic.' Motorcars, pedestrians and cyclists pass along Frimley Road in Camberley, Surrey. 'Including...' a scrap metal truck and double decker bus. "Our Don." A dog is shown in close up footage, panting with his tongue out, chewing a bone and running in the garden. A woman is seen, throwing him a ball. She holds up a treat, which the dog begs for, standing back on his hind legs. A man is seen with the dog, looking into the camera. '"Grafting" by... Mr. Ted Timms.' begins with 'lopping'., for which he saws the tree to be propagated, and continues with 'binding', for which he ties the scion to the stock or root tree with string, and 'waxing', for which he rubs on wax from a pot with his fingers. Two little girls, 'Rosemary and... Margaret', are seen outside a house. Margaret rides a tricycle. A baby sits on the grass with the children. A tree is felled, seen from across Frimley road at the family house from an elevated position. An older woman prunes roses in the garden. She is also seen in a smart hat and pearl earrings. Several more women and men are seen in head shots in a garden. Don, the dog, emerges from a field of bracken and fern. Family members are seen, inspecting trees and plants in the garden, sitting with the dog in the shade, pushing and shoving one another playfully.

In riverside scenes, a couple walk along the water, while boats and punts pass by. The young woman in a crochet hat smokes a cigarette by the water. Countryside views follow. A sign in front of a house reads ‘Shops & houses will shortly be erected on this valuable site. Ives Shee & Co., Building contractors, Grove Road, Woking.’ Family members are filmed while in a garden. Further river scenes follow. Family members walk along the bank, where boats, punts and ferries move past. Young female family members stand in a garden with a young boy. A biplane turns on an airfield (G-AAXF). Another takes off from the field. The first is taxied by a small vehicle. Family members, carrying picnic baskets, leave the house and climb into motorcars, waving goodbye as they drive off. They are seen walking in the countryside and taking a picnic in a wooded area. They play cricket, using a stick for a racket and trees for stumps. The whole family joins in, young and old. At an outdoor swimming pool, swimmers in bathing costumes dive into the water from a diving platform. Beach scenes close the film. A row boat moves into shore, where a child retrieves an inflatable ring from the water. A pier is in view behind. 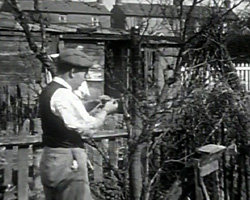