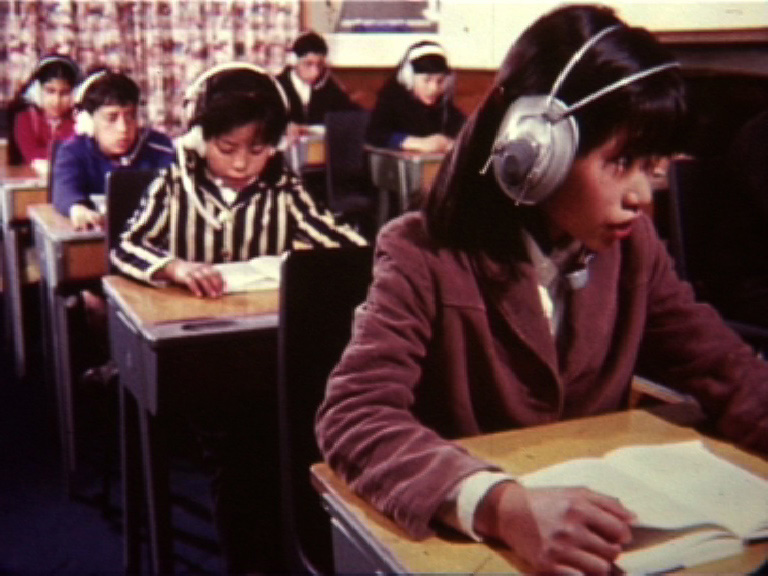 The film opens with shots of Tibetan children walking in the grounds of the Pestalozzi village accompanied by a Buddhist monk. The narrator explains how children from many countries are on a "two way ticket" which means "new hope and a brighter future". Titles: "Two-Way Ticket", "Presented by The Pestalozzi Children’s Village Trust", “A Cinechrome Film”. There are panoramic views of the countryside surrounding the village as the narrator explains the aims of Pestalozzi and the International Village Trust. Shots of the buildings and children are followed by a still of John Heinrich Pestalozzi and a shot of Dr Walter Corti. Panoramic view of Swiss countryside and the Pestalozzi village near Trogen where British children are gardening and making skis. The narrator explains how the village at Sedlescombe was established and how there has been a change in emphasis on taking children from newly emerging nations, including the Middle East and India. More shots of the village follow, including children in national costume.

As Thai children enter a building, the narrator explains the challenges facing the trust and that more houses are needed. A shot of men doing ground works in preparation for building follows. The narrator explains the selection process for children to attend the village before explaining how money is spent on education and fostering international co-operation between different nations. A senior trust member meets with a child and parent. The narrative explains that children are arranged in family groups. Shots of children with their house mother, preparing national dishes in the kitchen to celebrate a festival. The family group sits down to eat the meal. Tibetan children are also seen eating a meal. The narrator explains that the children fled with the Dalai Lama as refugees after the uprising against the Chinese in 1959. Shots of children at worship; Buddhist shrine, Indian prayers and other groups, including a visit to Sedlescombe Parish Church for Christian worship. The narrator highlights that the buildings are organised to accommodate different national groups. Scenes of children reading together in the common room.

A child writes a letter to his family. In the language laboratory children are learning English. A puppet show helps children from the Far East to improve their English. A brief shot of Sedlescombe Primary School accompanied by an explanation that children join in with formal education. At Claverham school, Pestalozzi children are filmed in the class room with other children. Shots of children participating in woodwork, bricklaying, mechanic, metalwork and horticulture at the weekends. Shots of a football match and badminton in the Swiss Hall. The narrator explains how an extensive programme of activity is arranged for the children. The children sing, accompanied by the piano and the Tibetan children play a national game. Displays of national dances, the narrator explains how the children make their own costumes. Children in the library talking to the Director of Studies.

The commentary continues, highlighting that in the future the children will "take up the mantel of leadership" in their own countries. The children are seen taking part in a Festival of Light, as the narrator explains the challenges facing the trust; the need for more money to build more houses as more children are on their way. "In this village of children lies one of the brightest hopes for the future -a two-way ticket to peace and understanding between all the peoples of the world". Titles: "Two-way Ticket was presented by", "The Pestalozzi Children's Village Trust", "A Cinechrome film". The film concludes with a shot of children walking through the grounds of the village.

Two Way Ticket (1968) was produced by the Pestalozzi Children's Village Trust about its work with disadvantaged children from around the world. The film is one of several housed by the Screen Archive South East which feature the Pestalozzi village in Sedlescombe in the early years of its work when it took in refugee children, initially from Tibet, but later from Vietnam, Palestine, Nigeria, Thailand, Nepal and India. These include They Built It Themselves (1969-1972), Dalai Lama visit to Pestalozzi (1973?), Let’s Go Out (1975), Pestalozzi Children’s Village; Building work; farming; metal work (ca. 1977) & The Pestalozzi Story (1984). Two Way Ticket (1968) highlights some of these changes and features children from Thailand in their national house. Until 1997, the children were taught at local schools, including Sedlescombe Primary School and Claverham College as seen in The Pestalozzi Story (1984), as well as receiving English lessons at the Pestalozzi Village. In accordance with the Pestalozzi philosophy of "Head, Heart and Hands", the children were also taught practical skills in the village. In They Built It Themselves (1969-1972) a national house is seen being constructed with much help from the children. This, and other films in the collection such as [The Afternoon Club: Khalid Aziz Pestalozzi Appeal] (1984) & [Children Like These: The Story of the Pestalozzi International Childrens Village Seddlescombe] (1986) were produced to raise awareness of Pestalozzi and to encourage the public to donate to its work. The title of the film and its narrative portrays the children as being on a journey to "new hope and a brighter future".

Screen Archive South East holds a large collection of Pestalozzi films, dating from the 1940s to the 2000s. The collection contains both amateur and professional films that record the activities of the Pestalozzi village in Sedlescombe and other Pestalozzi organisations worldwide. Highlights amongst these include [Milestone [?]; Children’s Village Trogen] (1947?), Let’s Go Out (1968), They Built It Themselves (1969-1972), Dalai Lama visit to Pestalozzi (1973?), [The Afternoon Club: Khalid Aziz Pestalozzi Appeal] (22 May 1984), The Pestalozzi Story (1984), [Children Like These: The Story of the Pestalozzi International Childrens Village Seddlescombe] (1986), Pestalozzi Export (1996), A Year in the Life of a Pestalozzi Student [Pestalozzi; Education Today for Tomorrow’s World] (2000), [Pestalozzi (Across the Pond; National Geographic Channel)] (2002) & Education Today Today For Tomorrow's World (2007?).

A Village Where The World Is One* by Beryl Lucey, London: Regency Press Ltd, 1984

The story of the Pestalozzi International Children's Village in England. Copies are held at various East Sussex libraries and at Screen Archive South East.

The official site of the Pestalozzi International Village Trust, with information about Pestalozzi, its work with young people and a history of the organisation.
http://www.pestalozzi.org.uk

Location: East Sussex Records Office & Screen Archive South East A public archive containing the recordings, film, photographs and press cuttings that Pestalozzi has collected over the years since it was first established in England.