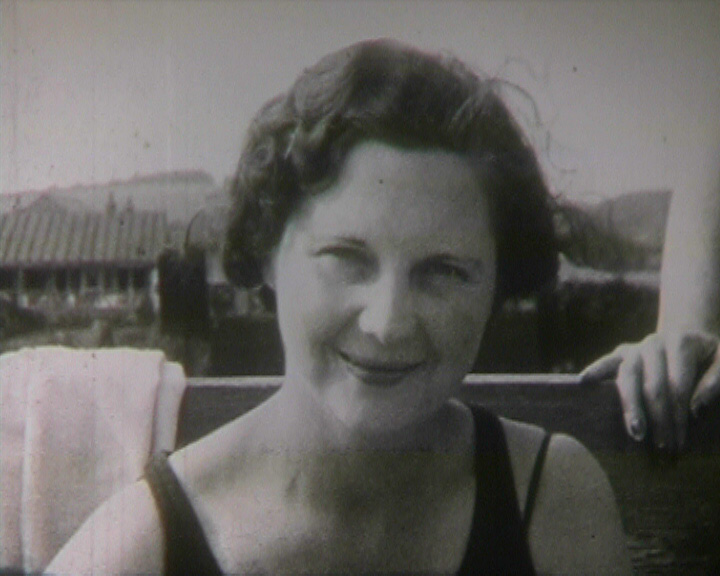 The film contains three sections dedicated to golf, notably to the drives and swings of the male players, many of whom are wearing plus-fours. Away from the golf course, members of the Ross family relax on a shingle beach. The adults and children sit together on the beach, dressed in swimming costumes, making direct eye contact with the camera which repeatedly captures them in close-up shots. Mrs Vera Ross does some knitting on the beach, whilst others swim and canoe in the sea or partake in shore fishing. On another occasion the filmmaker Charles Ross records his young daughter, Ann, toddling around the garden of their home. The young family is also captured a few years earlier in Dufaycolor film - Charles and Vera Ross sit with baby Ann, sheltered from the sun by a garden umbrella. Ann is then briefly filmed being bathed.

Dufaycolor was an early film system that employed a matrix of red, green and blue to produce colour on film.

This film is one of several home movie compilaions by Charles Ross and his family which are held at Screen Archive South East. The subject matter of the film is typical of the other films in the Ross Family collection. After being wounded in the First World War, Charles Ross was advised to live close to the sea. Consequently, he and his wife, and their daughter Ann, lived in Sussex. The films feature frequent visits to the beach with family and friends. The beach-goers exhibit a relaxed and often playful attitude, in an era often attributed with reserved middle-class sensibilities. The Ross' playfulness can also seen in [Ross Family Pictures I] (mid-1930s) and [Ross Family Pictures V] (mid-1930s).

The presence of the golf scenes in [Ross Family Pictures III] (mid-1930s - mid-1940s) relates to Charles Ross' membership at the West Hove Golf Club. He would frequently film his fellow members' swings in order for them to study their swings at a later date, such as in [Golf] (mid-1930s).

Charles Ross was also interested in aircraft, and he filmed several outings to Croydon Aerodrome. Chronologically, the latest footage in the collection is the film [Ross Family Pictures III] (mid-1930s - mid-1940s). It comprises of images of the Ross' daughter Ann during the latter stages of the Second World War where she is captured in Dufaycolor as a baby in her parents' arms, and later as a toddler in the garden. Although the films of the Ross Family collection is in many ways typical of home movies of this era, it has a charm about it which seems to derive from the presence of Vera Ross who has a natural affinity with the camera, often captured in close-up by her husband

"An international organisation whose aims are to further interest and education in relation to all aspects of film and video making and associated visual arts." The website has links to further useful resources as well as lists of cine clubs and societies nationwide.
http://www.fvi.org.uk/index.html