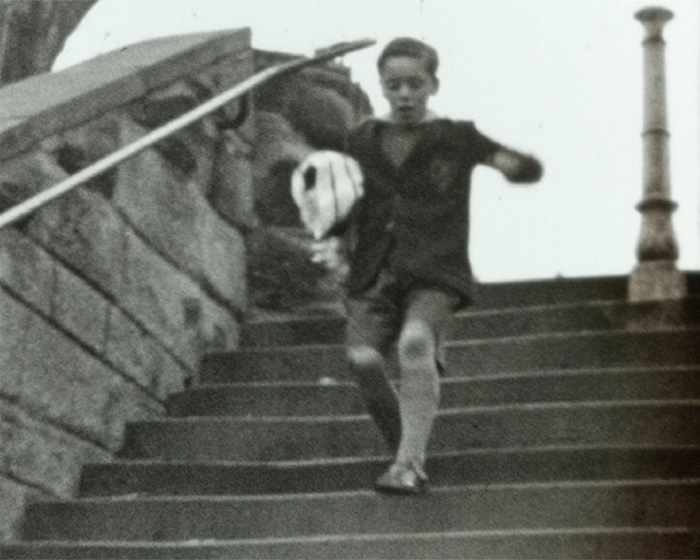 "David and Vincent explore parts of the town early one Sunday"

The first film shows two boys exploring the town of Hastings, showing the seafront adjacent to Marine Court, walking under by the Pier, Pavilion and Bandstand. The boys are shown walking up a flight of stone steps holding hands, dressed in winter clothing.

The film shows a young boy and his mother walking along Hastings seafront hand-in-hand, passing the pier as they cross the road.

"Off to the play park"

The film shows two boys walking together on route to Alexandra Park (?) to play in the playground, later joined by the rest of the family on a picnic and outing on the boating lake.

"The way home from swimming"

The film shows two boys and a woman on their journey back home from an outing to a swimming pool, carrying their towels. A young boy tries to roll up his towel with the wind blowing it away from him.

"A brief glimpse of the South Bank Exhibition"

The film shows the Festival of Britain South Bank Exhibition in 1951, with several of the moving water features, a fashion show and the exterior of the Transport Pavilion with steam locomotive outside.

"London - - with it's traffic and pigeons"

With scenes of the family touring London, including views of the exterior of BBC TV's Broadcasting House (Portland Place) with transmitter masts; the junction at Oxford Circus with buses, black taxis and commercial vehicles turning; the junction at Piccadilly Circus with Statue of Anteros (Eros); the iconic advertising signage on the side of a building; views of Trafalgar Square and its fountains, with people feeding flocks of pigeons; St-Martin-in the-Fields church, and Nelson's Column with Lions at the base.

A compilation of scenes of Christmas in 1951 showing a street with Father Christmas arriving surrounded by crowds of photographers with flash bulbs; shots of illuminated (night-time) street decorations (dark); followed by shots of a young boy in through St Leonards-on-Sea (Ellenslea Road) on his push-scooter followed by his older brother.

The seventh film shows a commute on a train from Hastings (?) railway station, with views of the platform and signal box as the train pulls out of the station. Views follow of the train in motion passing several stations, and capturing the industrial landscape adjacent to the railway line.

Title" One Snow Fall" The eighth film shows scenes of three boys playing in snow on a hilly street, followed by a trip to Hastings seafront to watch the Heron Gulls on the shingle beach and to ride their scooters.

"We visit a film premier. Can you spot the Stars?"

The final film shows two boys exploring the countryside on their scooters and crossing a railway track. End title: "The End".