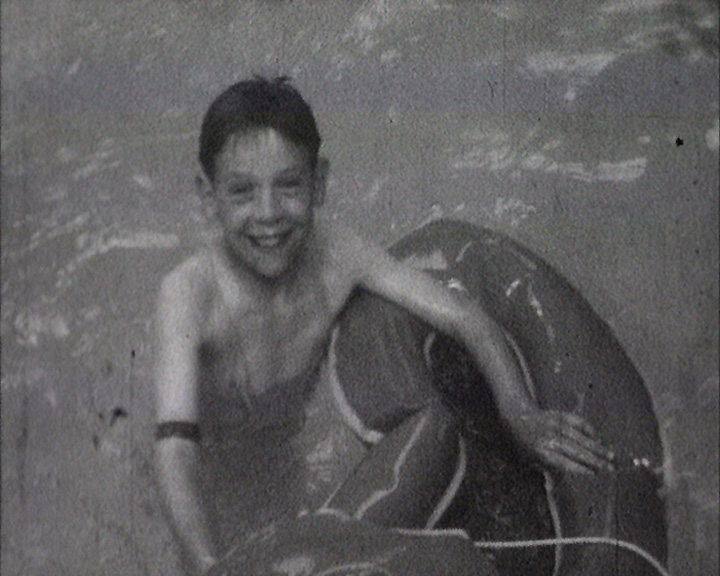 “S.S. Brighton opened by Earl Howe with the Shiverers Swimming Club and the band of Mile Oak School.” “S.S. Brighton is the finest swimming stadium in the world.” The opening titles are followed by general views of the indoor swimming pool, spectators take their seats on the balcony. Earl Howe and the mayoress walk in and take their places alongside the pool. Earl Howe makes a speech, a press photographer in the background photographs him. Several men lower the model ship SS Brighton into the pool and Earl Howe pushes it off. A swimmer tows the ship behind him across the pool. “The Shiverers Military Band. (The band of Mile Oak School) leads in the swimmers.” The band march in, barefoot, alongside the pool followed by members of the swimming club. The swimmers line up along the side of the pool. The band marches past led by a young boy drum major dressed in a sailor outfit. Groups of young children dance into the pool area, acting as horse and trainer and pausing at the poolside. A man conducts the band from atop the pool’s slide. The youngsters dive in and demonstrate their swimming abilities. Scenes of the busy pool: people playing with a huge (Bukta) ball, attempting to climb over it using the ladders attached to it. Others play on lilos, on the slide and dive from the side and diving boards. "Are you a Shiverer?". 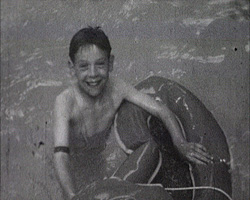 It is not known who the film-maker was, although it possible that he/she may have had a connection with either the Mile Oak School Band or the Shiverers Swimming Club. The model boat, which appears in the film, was based on the Queen Mary, and is said to have been anchored in the middle of the pool at the end of the day and floodlit. This record of the SS Brighton as a swimming pool is particularly pertinent as it was turned into an ice rink just two years later; the result of two very hot summers keeping people outdoors and rendering the swimming pool unprofitable and unsustainable. The building was later used as a conference centre before eventually being demolished in 1965.

The exterior of the 1930s building is captured in the professionally-made film Brighton (ca. 1957) whilst an amateur film-maker records an ice-show in the converted building in [Ice Rink Show; Sleeping Beauty on Ice] (December 1960).

Screen Archive South East houses numerous films which demonstrate the popularity of swimming in the South East during the 1930s, in lidos, private pools and the sea. The popularity of the sport in Walton-on-Thames is captured in [A 'Capitol' Newsreel by Clifford Spain III] (1927 - 1934) at a swimming gala on the River Thames and the opening of a new pavilion for the Walton Swimming Club.