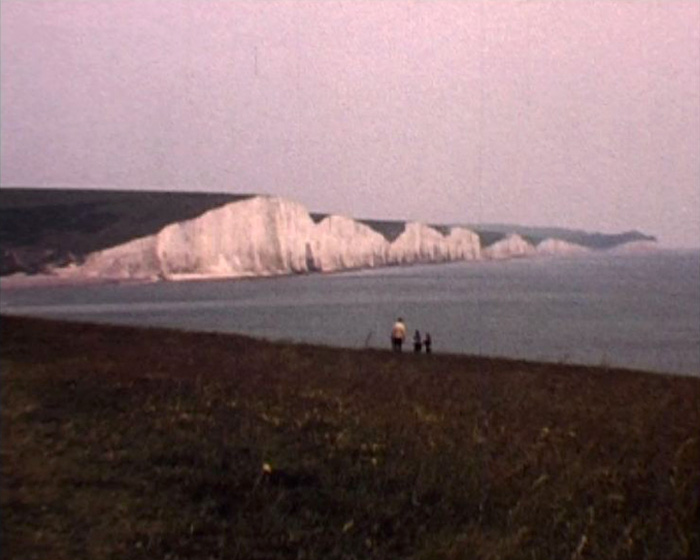 This amateur colour travelog-style documentary follows the route of the popular South Downs Way, accompanied by a voiceover providing historical narrative on the walking route and local history of the areas the path passes through.
The route starts at the Seven Sisters Country Park on Beachy Head, with shots of the lighthouse. The film moves on across the South Downs to the villages at East and West Dean, stopping to view the Wilmington 'old man' white washed (painted) on to the hill side at Wilmington. Several rivers are highlighted including the Cuckmere River at Alfriston, with village views. The film then continues along the path through the hamlet of Glynde viewing Glyndebourne Opera House and continuing out towards Firle Beacon, Northease Manor and Ditchling Beacon with views across farmland, dotted with sheep. The next stopping point provides views of the Jack and Jill Windmills at Clayton, followed by views across Devil's Dyke. Sompting is the next stop, with narrative on the Saxon Church of St Mary's and views of the churchyard and gardens. At Parham Park near Storrington, several men fly tethered gliders over the countryside and a wattle maker demonstrates how to make a traditional wattle fence. The narrative describes the use of the fence and the methods used by shepherds to count sheep.

At Amberley on the river Arun, the voice over explains the landscape has been reverted to a nature reserve for birds and the shots follow the river Arun to Arundel. Arundel castle, village and river can be seen. The walk moves on to Houghton and the George and Dragon Inn near the village. The final point is the Roman Villa at Bignor where the film concludes with a closing summary. This film was the Sussex Film Festival 1978 Challenge Cup Winner and awarded a certificate in the 1978 SERIAC competition.