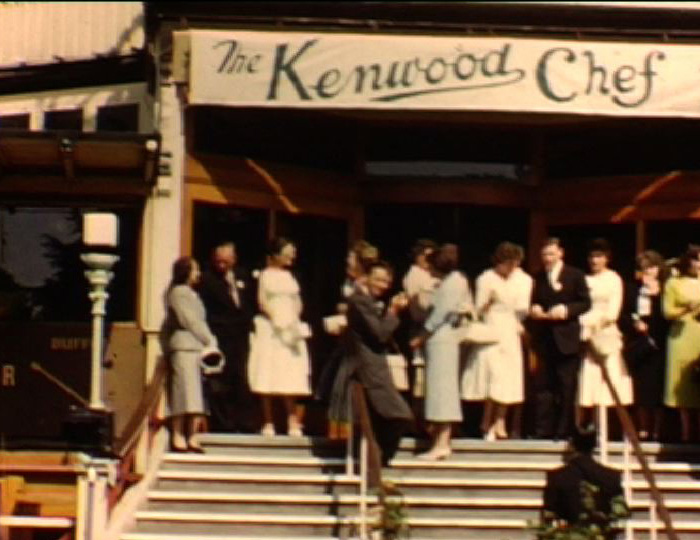 This film opens with colour views of a sea journey aboard a large the Queen Mary. Scenes including a mix of military and civilian ships on the water. A black and white sequence aboard the ship includes Mr Wood standing next to a life preserver ring being battered by the wind.

In colour, Ken Wood takes a sightseeing trip through New York, capturing various scenes of the city with traffic and high rise buildings including the G.E Building of the Rockerfeller Center (?) and a close up of a storefront with a sign that reads: ‘ Kenwood Electric Chef’ with shots of the food mixer on display in the window. On a sightseeing trip on the Hudson River, wide views of the New York skyline follow: the Empire State Building, views of the 'United States Lines' shipping company and Statue of Liberty. Back on land, a series of street scenes show Grand Central Station and the 'Trans Canada Air Lines' building on '16 East 58' [Street] in Savoy Plaza. The film then cuts to exterior views of an airport terminal building (?), where a group of US Army/GI soldiers stand with their kit. Aboard a plane Mr Wood captures a shot of two air stewardesses in a staff area, ending with a brief shot of an American Airlines plane taking off from a runway.

Mr Wood travels to San Francisco, capturing views of the boat ‘Dana T’ and The ‘Harbor Queen’ mooring in a marina adjacent to 'No. 9 Fisherman's Grotto', with shots of the Golden Gate Bridge, Alcatraz Island and Richmond - San Rafael Toll Bridge. In colour the film returns to New York city, recording the view through the windscreen from the rear passenger seat of a car. Several Street signs direct traffic for the 'Bronx' and 'Manhattan'. Scenes on a passenger ship on a rough seas are followed by a family visit to Niagara Falls in winter.

The next section opens with view of the Chao Phraya river (?) in Bangkok from a building. Mr Wood and another man take a boat trip on the river, before boarding an aircraft 'Malatan Airways - G-APDR' cutting back to mixed aerial and street views of Bangkok. At an airport 'BOAC - G-ANBG' sits on a runway (damaged film) followed by views of Bangkok Airport and aerial views across a wing of the plane (Himalayas & Mount Everest ?). Mr Wood and his companion visit the rural Karla Caves, as several local men carry them on a makeshift sedan style chair up a steep hill. Dark interior views of the Buddhist statues and cave interior follow.

The film cuts to Mr Wood holding a brochure up for the camera dated May 1956 which reads; The International Resort' [Torquay] flicking through some of the pages with photographs of several beaches. This is rollowed by exterior shots of the ‘Osborne Hotel’ in Torquay, with street views of the crescent street.

The film then shows two planes on a runway at an airport: 'N10402V' and 'N1028V' from ‘Pan American World Airways’ group. In flight the film-maker tours the cockpit capturing the pilot flying the plane. The film continues with mixed moving shots from a car, followed by a wide street view of a Parisian restaurant: ‘Fouquet’s’. Mr wood and a male companion sit at a table drinking 'Schweppes lemonade', smoking cigarettes and capturing views of a busy Paris street.

The next section (possibly in Woking?) captures views of Kenwood Company gathering to promote the Kenwood Chef mixer. A banner obscures the building's name. A fleet of Kenwood demonstration vans have assembled outside the building, several have demonstration models of the Kenwood Chef food mixer attached to the roofs of the vehicles. Portrait shots follow of company personnel standing together on the steps having their photographs taken.

The next sequence taken from on board a boat, shows Mr Wood gathered with a group of adults, he rests the camera on the deck so he can get into the shot. The final film captures street scenes outside an industrial site (Kenwood Factory ?), with a van marked ‘Kenwood Domestic Appliances’ parked on the street and several people in aprons (staff?) wandering past the camera.