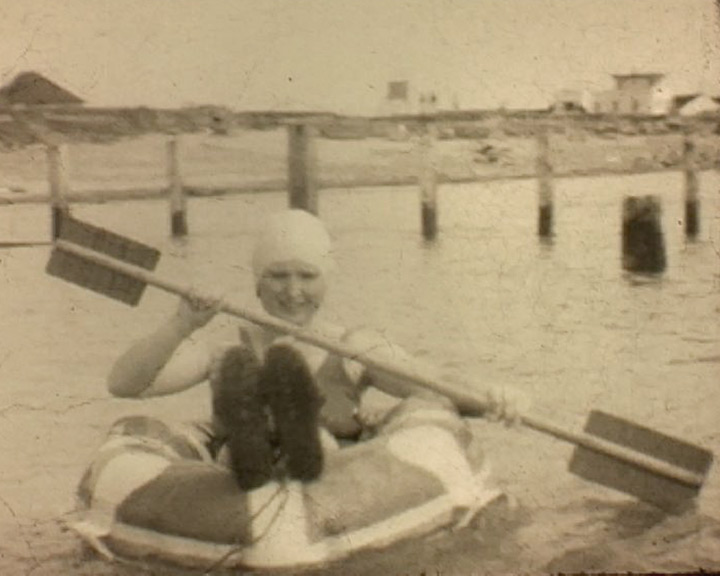 This film opens with black and white footage of a rural house with large garden, decorated with images of King George V and Queen Mary, with the house, trees and bushes draped in bunting and flags. The next scene opens with family home footage of the Silver Jubilee parade with George V in a Royal Landau passing through Regent Street followed by the Kings Horse Artillery, Household Cavalry and other dignitaries from across the Commonwealth and Royal Household.

Commercial newsreel footage [not included in the online clip] follows of the Royal Landau arriving at Buckingham Palace, escorted by the Household Cavalry with members of the Royal household going into St Paul's Cathedral.

Family footage continues with a compilation of mixed shots in black and white, showing Stella Reed and family in a garden, the family leaving a shop or hotel, and wide shots of Regent Street covered in bunting and flags for a celebration. The film then shows scenes of the parade with an Officer on a horse, members of the Household Cavalry and a Landau with the King and Queen, followed in convoy by a second landau with several men (possibly Royalty (?)). People crowd into the streets following the procession.

Back with the family, two boys play together in a garden with a ball and cart. Family and children together in the garden (Austin Reed, Emily Reed and Stella Reed with children) stepping out from under a shelter or children's playhouse. Austin Reed holds a young child up for the camera (out of focus).

In the next scene the children are playing with several rabbits - very aggressively holding them up by the ears and scruff of their necks, letting them dangle in mid air and shaking them violently [scene not included in clip]. The children then play nicely with them and stroke them. The next scene shows the family having a picnic next to a car and a baby in a cot in the garden. This is followed by an exterior view of a house or holiday home. Stella with her daughter and her son are outside the house sitting together and posing for the camera. The children then play in a inflatable boat on the water as the family enjoy a seaside holiday, the house is seen in the background. Stella plays in a boat paddling in a circle, with views of the water and shoreline (?).

In colour (Magenta cast) two boys play with toy boats on the shoreline. Others paddle together in the sea. Family play in the water together. A toddler girl is sat in a pram smiling at the camera. A family has a picnic on the beach. Returning to black and white, there are shots of ships at sea and the family. A picnic on the beach leads into scenes of a 'Saro London' style boat-plane flying overhead and landing on the sea.

The next scene shows the family aboard a pleasure craft, a man steers the boat whilst the film-maker captures views of boats on the water. The film cuts to a wide shot of an airfield with a biplane landing, and two other aircraft stationary on the runway. G-AAAV (DH60G de Haviland Gipsy Moth) and G-AAHE (AVRO 594 Avian MK4). In the distance another plane lands, followed by a close up of a Le Pou du Ciel HM.14 (flying flea or louse of the sky) in flight and coming into land on the runway. A man gets out and a group of people crowd behind a barrier (possibly following an air show?).