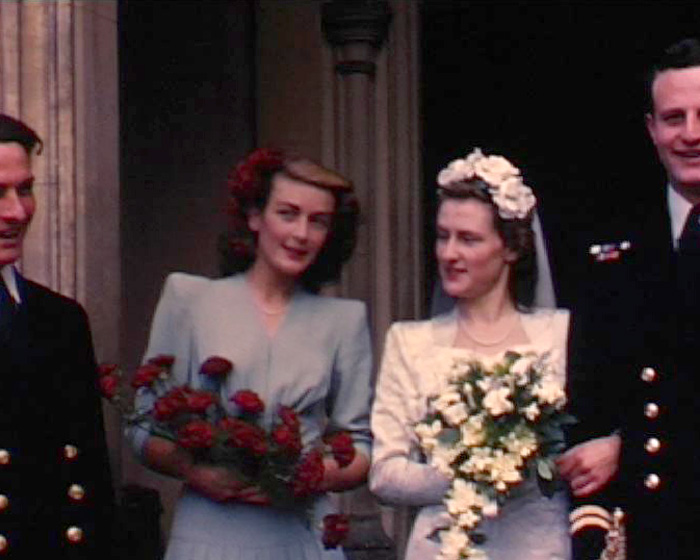 This film opens with black and white views of the family at Marlborough House School exploring the grounds and watching a boys sports day event. The film briefly cuts to a short colour sequence of the family aboard a boat watching a boat race on the River Thames that passes under Marlow suspension bridge near All Saints Church, to return to the boys sports day event. The sports day sequence includes highlights of several races and a men's tug-of-war event.

Following a short film of a boys swimming and diving event (film is damaged at edges), mixed exterior shots explore Marlborough House School grounds and the front of the main teaching house. Several young children dressed in school uniforms gather with their families in the grounds, many carrying plates of food and cups of tea. The camera captures a shot of one of the boys dropping a small plate on to the gravel driveway. The boy tries to pick up the pieces, whilst trying to balance a full plate of cake in the other hand. Distracted, the cakes drop off the plate and land on the ground, he picks them up and puts them back on the plate checking to see if anyone has noticed. In the foreground, a family member laughs and pretends not to have seen him drop the cake. The plates of cake are then offered around to the family as the boy rejoins the group. Further wide views of the school house and grounds, with parents and children wandering around, complete the sequence.

The compilation briefly cuts away from the Marlborough House School grounds, to join a woman and two boys on an outing to Bodiam Castle, with views of the group standing on the moat bridge in front of the castle.

The next sequence features a montage of mixed colour shots of several independent school buildings set within landscaped gardens and sports grounds (Canford School in Dorset plus others?).

The final section features a military wedding, with a bride and groom standing on the steps outside a church and walking under an archway of raised swords, held by several men in naval dress uniforms. The groom is dressed in a naval dress uniform, with the bride in a 1940s scalloped-fronted wedding dress. Guests gather in the church grounds to have the wedding tea, followed by group photographs of the wedding couple and the family. The film ends with an interior shot of the couple cutting the wedding cake with a naval sword.