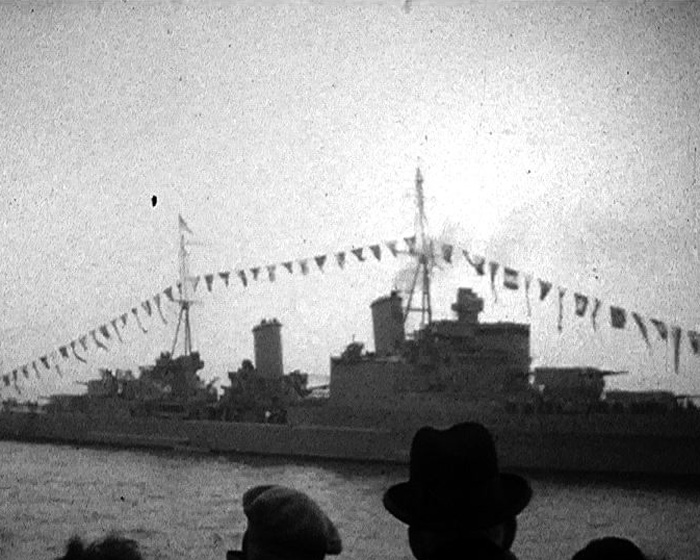 This film opens with mixed portrait views of a fleet of vessels on the water and in a harbour, adorned with naval, Union flags and signals. The Reed family are aboard a spectator boat, whilst a military band plays on the deck. The group watch the vessels on the water with hazy views of several ships and submarines adorned with officers standing on deck. Other ships sail past each other in the background. Overhead a fleet of aircraft (Fleet Air Arm ?) make a flypast (out of focus). In black and white, mixed shots of several pale coloured ships on the water adjacent to the spectator boat, pass the fleet of ships jostling for position. Views of the royal yacht HMY Victoria and Albert III (?) moored on the water, is followed by several close-up profile views of gun ships, as the spectator vessel sails past.

The film changes location cutting to a black and white family scene of the families trip to Instow, Devon. Several children dressed in full swimwear play on a driveway. Whilst on holiday, the families visit several beaches and a town centre (?) capturing a view of the Heard Brothers Ltd. Automobile Service Engineers shop front as they stand on a slipway (?). Mixed colour and black and white coastal views of a beach, landscape, and rocky coastline follow, where the family climb and play in the sea and on an inflatable boat.

The film ends with a black and white rural sequence of the families on a day out at a working farm. They picnic, the horses pull hay carts and harvest the hay from the fields. Two young boys sit on the back of a horse as it works and a toddler with a hay rake attempts to help the farm hand stack hay.