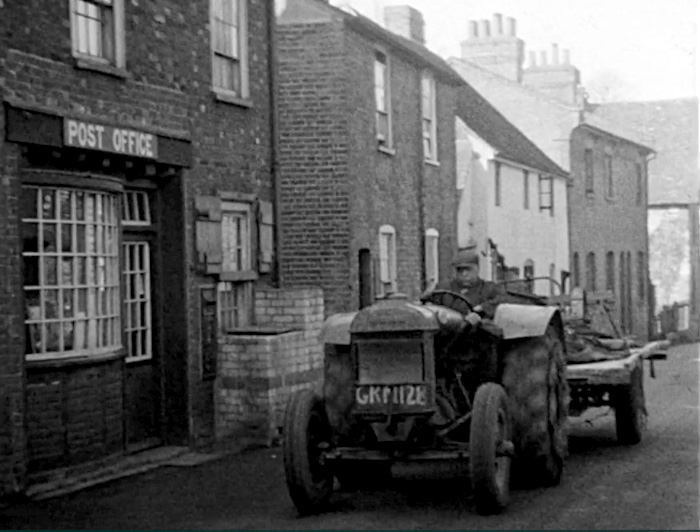 The film opens with a man riding a horse and cart carrying milk churns along a village street. A view of the village church shows Jean Baker, a local confectioner, walking down the Church path. George Gander, the grocer, is then seen entering his store. Post mistress Peggy Walker steps out of the post office while two men in Army uniform walk past. A tractor drives up the road. Two motorcycles appear to be escorting a car as it drives along the road, and a woman with a pram walks in the other direction. Sidney Wood leaves the village forge with a cart wheel. A horse and cart ride past. Janet Carey is seen walking through the church yard with a bicycle. A bus travels down the road. A toddler, Jane Morris, daughter of Archie Morris who made the film, walks along country lanes. Cows graze in a field with the vicarage in the background. Shots of the war memorial and the Church are followed by a young boy, Len Ralph, on a bicycle past the Darnley Arms, with Colin Ralph walking beside; both are wearing shorts and blazers.

The film then cuts to a Movietone Newsreel showing rowing at Henley.

Returning to the village, Archie Morris’s wife Ruby with their children Jane, Anne, Rosalind and Brian turn into a garden. The children play with a dog in the garden. The four children come out of the entrance porch at the 'New Cobham College' almshouses. The group walk down the street past Mr. Spells, the village policeman, with his bicycle by the 'Leather Bottle' Hotel. A Soldier from Lodge Lane army camp walks up the street and then is seen coming out of a pub. Harry and Dick Bramble, residents of Cobham college, walk in through the porch into the College building. Ruby Morris and then Archie Morris walk through a garden with the dog. The children ride in a horse drawn trap with local farmer Tom Jackson and his daughter Mary. Mr Robson, the butcher, and Mr Meggie, laundry manager (regular visitors to Cobham from Gravesend) walk along the road. A funfair and a cricket match take place at the neighbouring village of Snodland. Busy street scenes at neighbouring Ilford show shoppers coming and going outside the shop fronts. The scenes include Ilford post office where Archie became the sub postmaster.