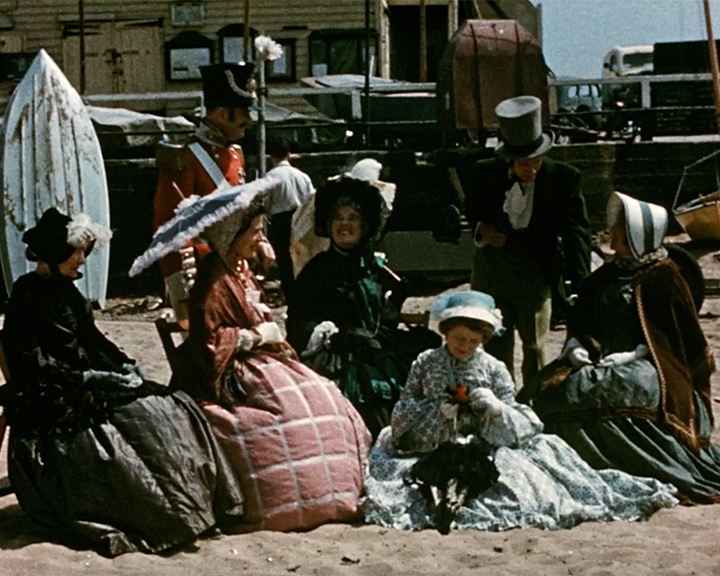 The film's opening title reads "Broadstairs has many associations with Charles Dickens". The first scene, "Bleak House. From the Jetty", includes shots of seashore, cliffs, waves and diving seagulls. A large house is seen first from the beach and then close up, focussing on a sculpted portrait of Charles Dickens in high-relief and a gate on which a sign reads "Bleak House".

A sequence titled "1959 Broadstairs Annual Dickens Festival" and "Residents wearing Victorian and Dickensian costume were about town. A Victorian lady and Miss Pross start out" follows. A woman is filmed showing off her period costume in front of a house, followed by another who poses and walks towards the camera.

A banner over a street reads "Dickens Festival" and the Bohemia Theatre advertises "Nicholas Nickleby", presented by Dickens Players and produced by Joan Taylor. Further participants seen walking and talking together dressed in period costume are assembled in front of a stagecoach. A woman smiles while standing by the gate of "Dickens House". "The Garden Party Bleak House" follows. Betsey Trotwood, Miss Pross, Miss Flite, Jo, The Crossing Sweeper, The Tuggs Family, Dog and Bill Sykes, Beadle and Oliver Twist, Dragoons, Clergyman, Riding Lady and others are amongst the assembly. Participants are shown talking to one another and performing in character while spectators sit and watch from deck chairs and a band with violinist plays behind. "Victorian ladies and escorts on the sand" depicts an assembled group of participants in period costume are shown talking to one another by the sea.

Shots of Bleak House open the sequence titled "Dickens Festival 1960. Bleak House Garden Party" in which "The Union Jack flag flutters in the breeze. March past of Dickensian and Victorian characters. Mr Eade leads down the the judges."

A banner between two houses reads "Dickens Festival". A group of musicians is seen playing behind a bust of Dickens in the garden. Further scenes of participants are shown walking, bowing and curtseying, including a parade of children dressed in period costume. "The End". 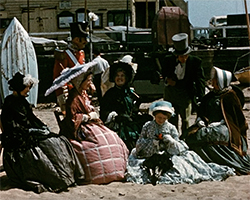 The Broadstairs Dickens Festival takes place annually in the third week of June. As owner of the Dickens House, Gladys Waterer established the festival in 1937 to commemorate the centenary of the author's first visit to the town. A production of David Copperfield was put on, and participants dressed in period costume to publicise it.

An annual festival held in Broadstairs, Kent to celebrate the life and work of Charles Dickens.
http://www.broadstairsdickensfestival.co.uk/