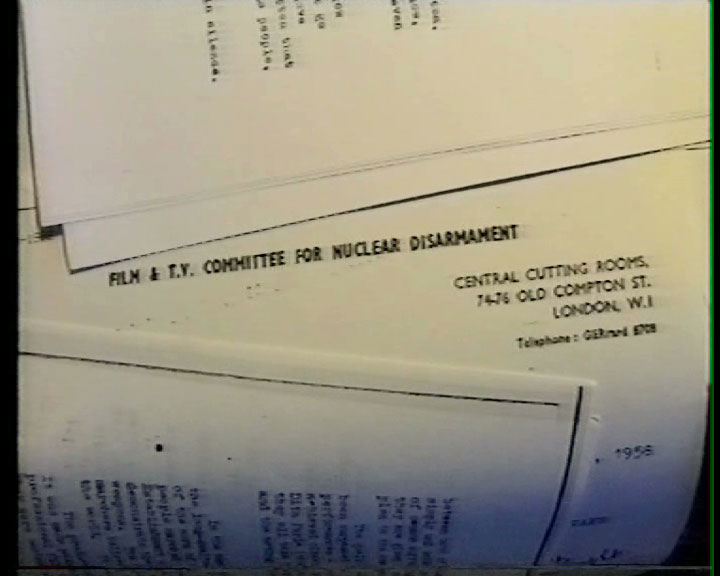 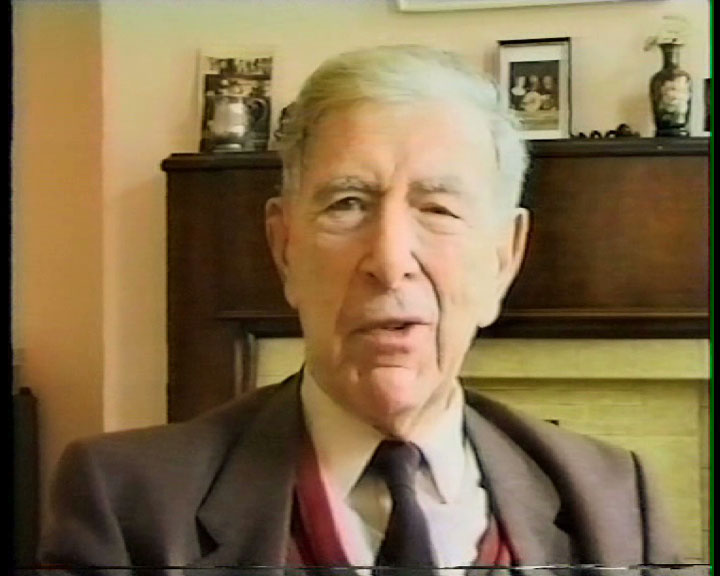 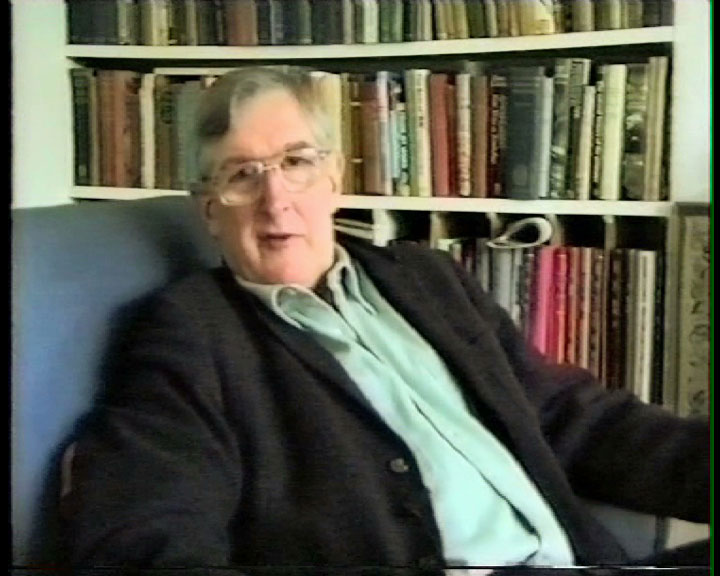 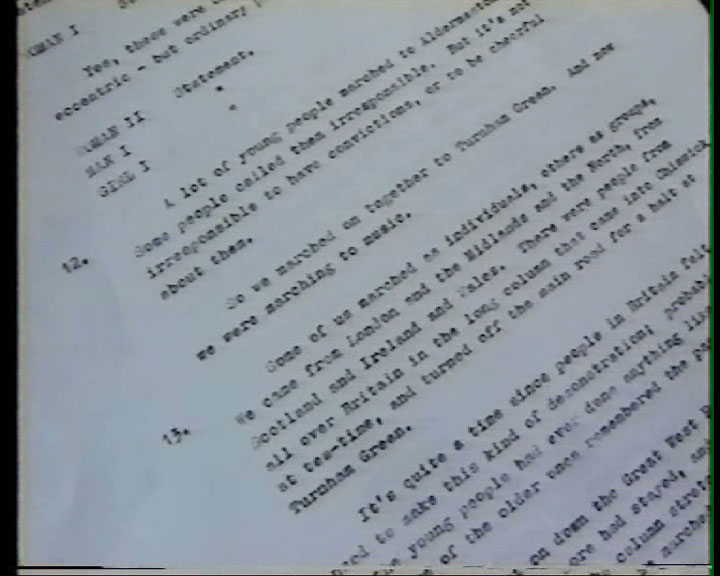 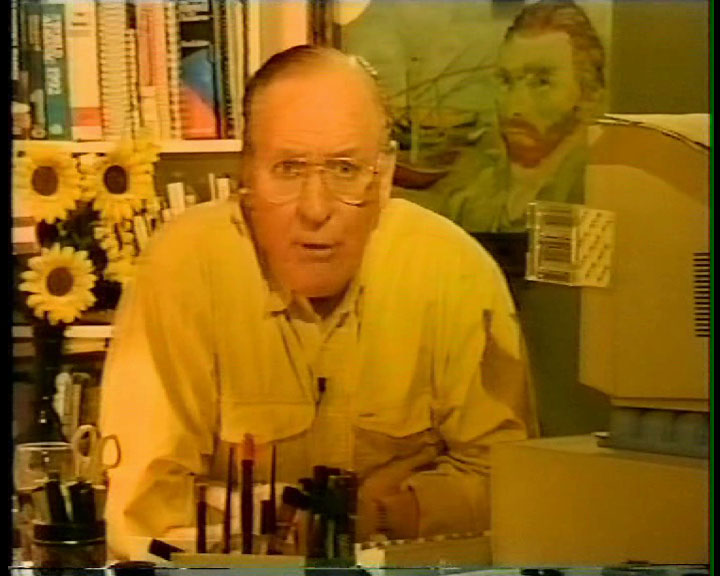 The music to "Oh when the saints go marching in" plays. An interview with Kurt Lewenhak opens the film. He describes how the story started in Soho, walking along Old Compton Street where he met Chris Brunel. They were introduced to two young men, Allan Forbes, an American Cameraman, and Derrick Knight, who formed the Film & TV Committee for Nuclear Disarmament. The nuclear bomb was felt to be an issue to get ones teeth into. Lewenhak suggested filming an antinuclear march, planned to take place between Trafalgar Square in London to Aldermaston. Lewis McLeod is interviewed, describing how Lewenhak had appealed for volunteer crew members at the union's annual meeting. McLeod "blagged" film from Ilford, and Kays agreed to process it. They had ten to twelve hours of stock for a four day shoot, so it had to be rationed. Derrick Knight began begging and borrowing equipment and film stock. Many of the crew members were ignorant of documentary making and studio cameras. A sync camera was donated but it was vast and complicated. A minibus was commandeered to carry equipment and people. Some of the cameramen were working under directors, such as Lindsay Anderson, a Free Cinema practitioner, but others were "a law unto themselves."

Crew included Peter Jessop, Bill Russell, Wolfgang Scuschitzky, who had roots in the older British documentary movement, and Chris Mengers. One cameraman describes his approach; he focussed on getting footage of famous personalities such as Bertrand Russell, Labour leader Michael Foot and Rev. Michael Scott, leading trade unionists and posters, banners, families and parties, of different persuasions, passing well known spots and landmarks. Producer Mark Lewis used a US combat camera, a hand held device that he could "have fun" with. Many of the crew speaking describe how they were not politically motivated but 'just wanted to help' and 'go along for the ride'. Bernice Rubens was given a tape recorder but admits she had no idea how to use it. She interviewed marchers and some of her recordings were used in the final edit to fill in long sequences of marching. She describes how while working on the project she gained a sense of commitment. Paul Lecker is interviewed, having worked on sound maintenance. He tells the story of a time when he had to start the camera van after the keys were lost. Many of the participants have dim memories of the event. Harry Wolf reads from a letter he sent to his wife while she was on holiday, in which he mentions how chaotic the filming was, that there are "too many directors and bosses".

Derrick Knight explains how sympathetic union member processed the film for free, but 'no questions were asked' when the material was 'winked through' at Humphreys and another lab. A list of the organising committee is shown, reading Lindsay Anderson, Christopher Brunel, Charles Cooper (Hon. Treas.), Allan Forbes, Derrick Knight (Hon. Sec.), Kurt Lewenhak, Lewis McLeod, Karel Reisz, Elizabeth Russell, Eda Segal and Derek York. Knight describes how the committee had 'hours and hours of footage and hours and hours of time to argue about it.' Each member had his or her own ideas about how the film should be edited. One dominant character, Lindsay Anderson, put himself in charge of editing the material with Mary Olam. She describes the need to 'find a thread' and a dynamic for the film using the material available. Atrocious weather made the footage more dramatic, but the film had to evolve out of what was there. Anderson suggested Christopher Logue write a commentary for the edit. Logue is seen, explaining that the film was straightforward and therefore 'didn't need much writing'. Anderson also 'laid his ace on the table' when Richard Deacon agreed to narrate the film. Again, Anderson's view prevailed.

Now the film was produced, it had to be shown. Head of Contemporary Films Charlie Cooper offered the film to the Academy Cinema on Oxford Street, who showed the film as part of their general programme with Jean Renoir's La Grande Illusion. The film is described as having had an immediate response. Derrick Knight explains that the film won an International Peace Award and was shown at film festivals. Thte CND used it, and it was screened in America and Japan. The film had a global contribution, which had an effect on protest politics for the next ten years. Allan Forbes speaks from Boston; the film was a massive contribution to world peace and stability. Music from 'Oh when the saints come marching in plays once more. 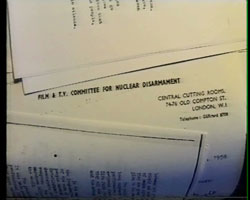 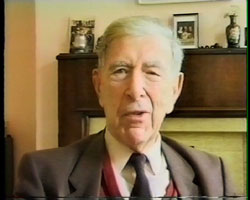 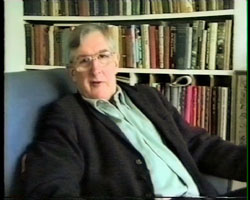 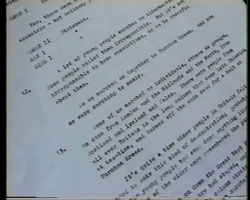 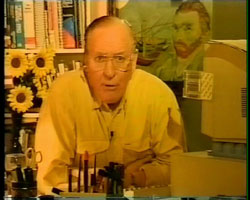 The March to Aldermaston documented the Campaign for Nuclear Disarmament's Easter weekend march from Trafalger Square to Aldermaston Atomic Weapons Research Establishment in Berkshire in 1958. Several thousand people marched for four days, traveling over fifty miles after growing fears of nuclear war had become acute in the late 1950s. It was to be the first of several such marches, held between 1959 and 1963 by the CND. The film was produced under the Film and TV Committee for Nuclear Disarmament. Richard Burton narrated commentary written by Christopher Logue. Uncredited members include Lindsay Anderson, Derrick Knight, Karel Reisz, Allan Forbes, Kurt Lewenhak, Lewis McLeod, Eda Segal, Elizabeth Russell, Derek York, and cameramen Chris Menges and Wolfgang Suschitzky. Bernice Russell, Harry Wolf, Mary Beales, who are interviewed for the making of documentary, were also involved. The documentary aimed to present the wide cross-section of society who took part in the march, dispelling myths of protesters as rebellious or ignorant.

Biographical texts and photographs are amongst the papers in the care of SASE.

'Early defections in march to Aldermaston', written by Guardian staff in April 1958

A brief history of CND
http://www.cnduk.org/information/info-sheets/item/437-the-history-of-cnd

A history of the company and details about further antinuclear films in their archive. Contemporary Films was instrumental in introducing British filmgoers to major directos Jean Renoir, Sergei Eisenstein, Andrei Tarkovsky, Werner Herzog, Satyjit Ray and Yasujiro Ozo, and distributed the documentary The March of Aldermaston.
http://www.contemporaryfilms.com/profile/profile.html