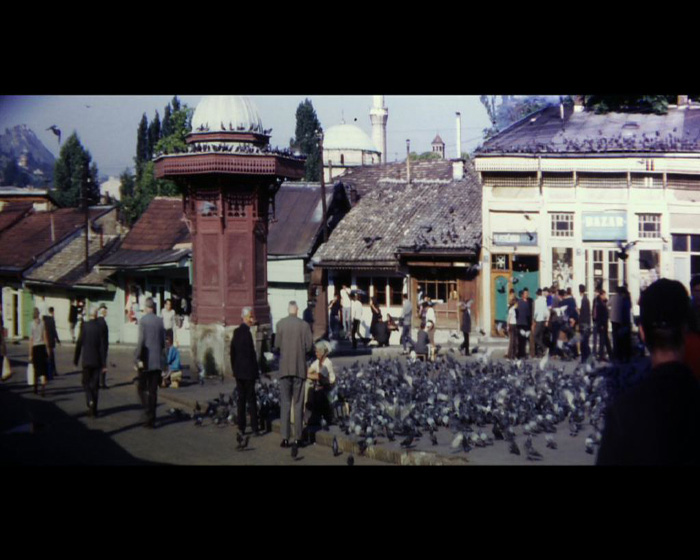 This colour anamorphic film opens with the main title: 'Glimpse of Yugoslavija 1971' over a map of the country which zooms into a region surrounding Sarajevo. The film tours the city of Baščaršija, with views and historical narrative of Gazi Husrev-beg Mosque, market with traders, food, textiles and crafts and the Sebilj wooden and stone fountain in Baščaršija square.

The animated map then moves to the city of Mostar, with views of the Mostar Bridge, buildings each side of the Neretva river and a local market with traders.

In Dubrovnic, views of a market, main square and local port are described by a historical narrative of the area. In Klincici, Cazin (Bosnia and Herzegovina) - A group of traditional Kolo dancers perform in a village square, wearing traditional dress and playing musical instruments to entertain the crowds. A commercial music soundtrack plays Slavic folk music. The tour then moves to Plitvice Lakes National Park, Croatia with shots of the many cascading waterfalls.
The final stop is Bled, Slovenia where the film-maker takes a boat trip to Bled Island to visit the Pilgrimage Church of the Assumption of Mary. Various shots of the lake and boats follow, and the film-maker joins a group of tourists for a boat trip. The film concludes with rural shots of a village where traditional farming methods are used.