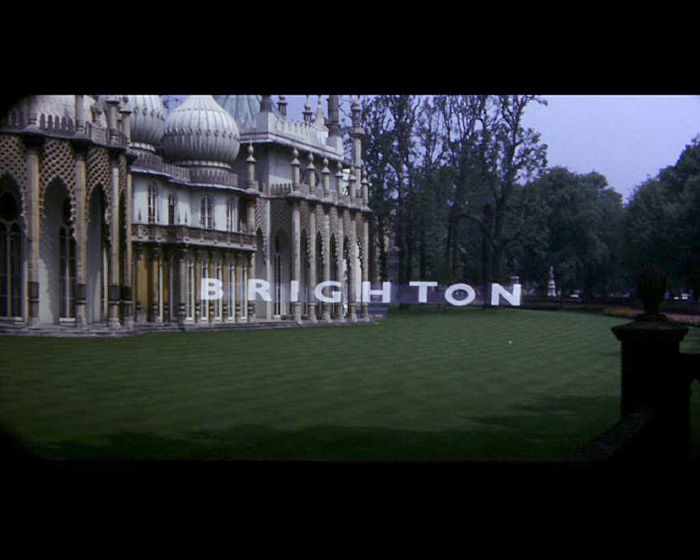 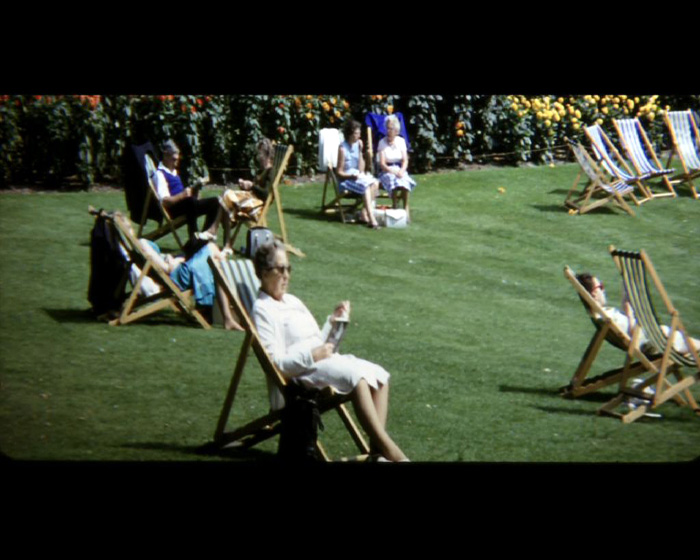 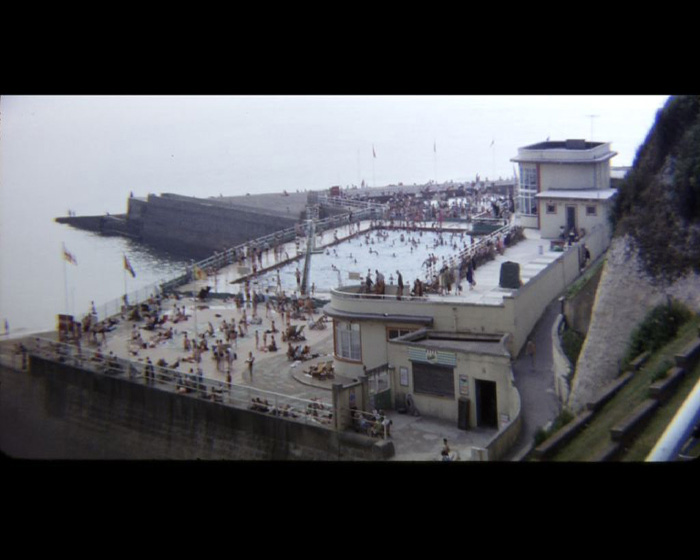 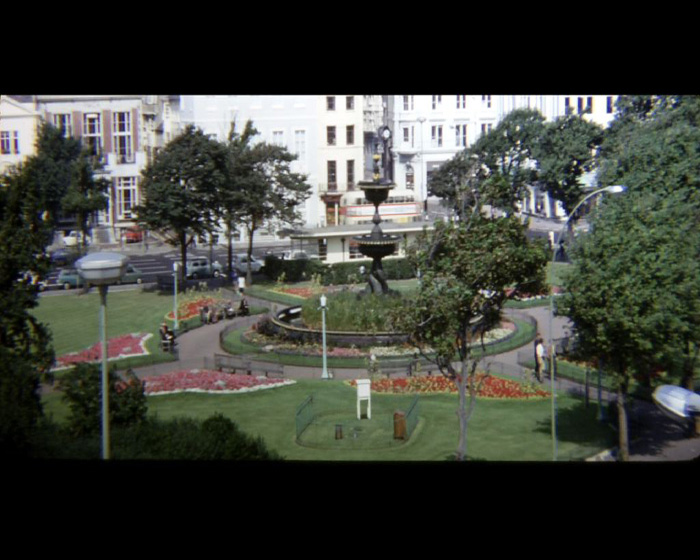 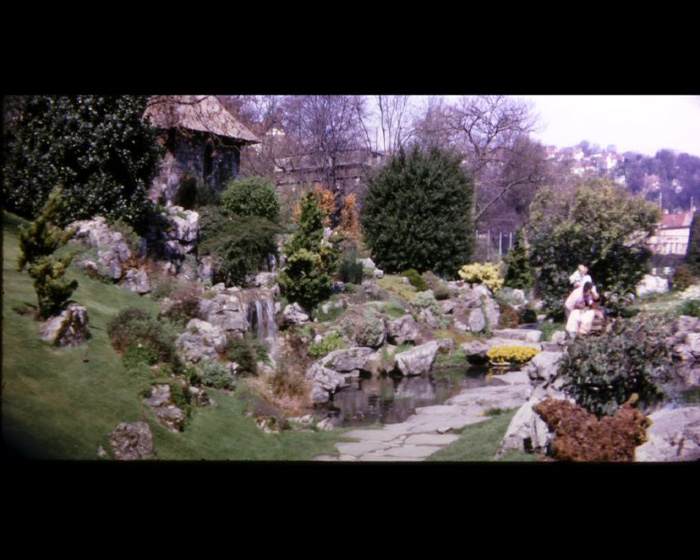 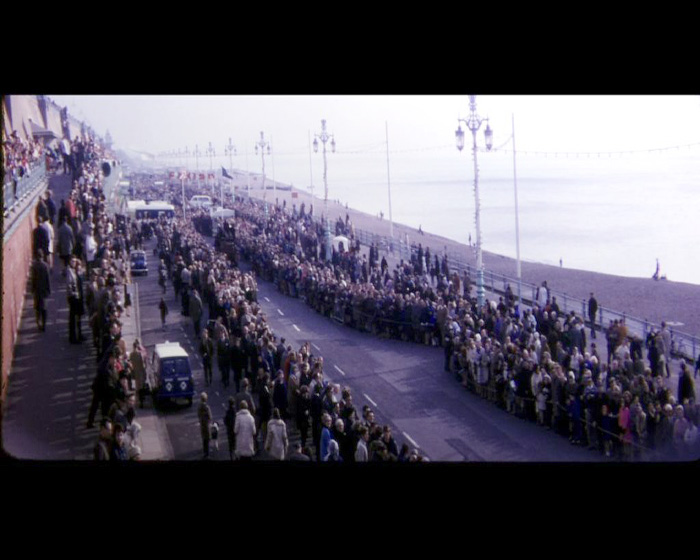 Opening titles: “Brighton And Other Places Of Interest”, "Photographed On Kodachrome II". [Credits and intermittent music soundtrack throughout.] The film opens with views across Brighton from Hollingbury golf course. [The narrator introduces each location, its history and its present day uses.] Close-up shot of the town centre, including the Royal Pavilion from Hollingbury Hill Fort.

Views of the Royal Pavilion, William IV Gate, The Dome and people sitting in the Pavilion Gardens. At Upper Gardner Street, a Saturday street-market is underway; the street is busy with shoppers looking at things for sale. The film links antiques which can be found at the market with antique shops at The Lanes; accompanied by shots of Meeting House Lane filmed from North Street and looking south. Shoppers can be seen looking at window displays; Sussex Square is introduced as an example of sensitive redevelopment of The Lanes; people sit at tables drinking refreshments in the square. At Brighton Place, drinkers sit outside the Druids Head pub.

The film cuts to views of the seafront, looking towards the Palace Pier from Madeira Drive; the pier viewed from a vantage point in Kemptown and at street level from Marine Parade. Holidaymakers are seen paying to enter the pier, the film includes shots of the amusements and rides on the pier and crowds of people wandering around. Fishermen are also seen fishing from the end of the pier. Views of the West Pier in the distance. Next to the West Pier, members of Brighton Sailing Club are seen assembled on the beach and launching their small sailing boats. The West Pier can be seen in some detail from the beach next to where the sailing club is gathered. On the promenade, children are seen sailing in boats on the boating pool and paddling in the paddling pool. People, young and old, relax on the beach and the promenade, playing on the beach, sunbathing and looking at the shops. On a stormy day, waves are seen breaking on the beach; brief shot of members of the Salvation Army singing on the beach. Shots of Louis Tussaud's Waxworks, the Aquarium, the beach and promenade looking east towards Black Rock. People are seen boarding a train at the Volk's Railway Aquarium station; the crowded train pulls off. The film features attractions along the route, including crazy golf, go carts and the children's playground. The train is seen arriving at Black Rock station. Shots of Black Rock lido from the cliff above and from inside the lido; the pool is seen full of people swimming and sunbathing around the edge. Views looking east, towards Rottingdean, prior to the construction of the marina. Filmed on the return journey on the train, people are seen relaxing on the beach and playing on amusements and in the playground.

Brighton parks are introduced as an alternative to the open space on the seafront. Views across the Steine Gardens with flowers in bloom and a fountain, followed by the Victoria Gardens and close-up shots of the statue of Queen Victoria and the King and Queen pub. Further out of town at Preston Park, the film captures general views of the park, St. Peter's Church, a cricket match being played, clock tower, families picnicking, tennis players, a bowls match and views of the Rose Gardens and Rotunda Cafe. On the other side of Preston Road, the Rock Gardens are seen. Water flows down the cascades into the pond. Vintage cars are seen travelling into Brighton along Preston Road, crowds of people are gathered at Madeira Drive to watch as the vehicles reach the finish line. Princess Grace (Kelly) and Prince Rainier III of Monaco are seen in one of the vehicles taking part in the rally. The film ends with views of golfers playing at Hollingbury golf course and views of the towns as the sun sets. Title: "The End". 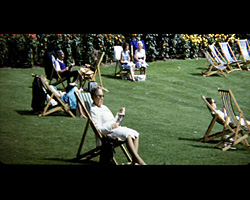 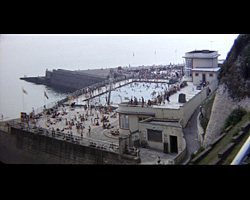 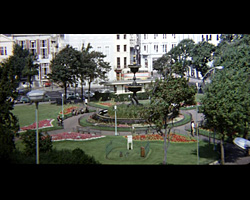 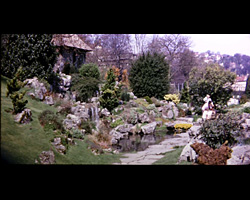 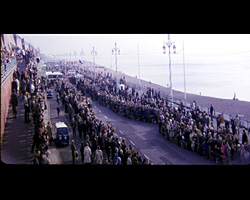