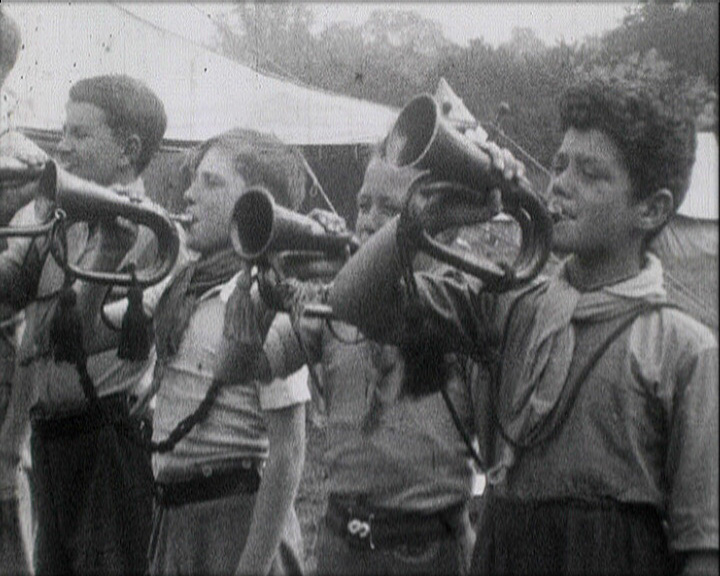 Scouts from the 4th Hove Scout Troop stand outside their tents. The scoutmaster walks past with his pipe. Women and men take part in various running races; a man performs handstands for the camera. The scouts play football, then eat snacks. A general portrait of the troop shows them standing at ease, several of the scouts have bugles. Scenes of the scouts and scoutmasters swimming in the river. Many scenes of diving, swimming and fooling about in the water follow. There are shots of other men and women on the riverbank, followed by shot of the group playing skipping games and fooling about. Further diving scenes at the river, some in reverse motion. There is a brief shot of some of the scouts in the cooking area on camp. Portraits of some of the scouts; two stumble about with bottles pretending to be drunk.

“Pulborough, Sussex. July 1934. An Outing”: the members of the Brighton and Worthing Deaf Association a Reverend and his wife at Pulborough. A group of men play bowls, then there are scenes of the group eating and drinking tea at tables outside. The final shot is a group portrait on the lawn of the Reverend, his wife and their guests.

Although the film-maker is not known, it is almost certain that he or she was involved with both groups in the film. It is possible that it was the Scoutmaster himself who made the films.

Screen Archive South East houses a large number of films that have recorded scouting in the South East over the years. These include twenty-three films spanning the late 1940s to the 1980s which were made by a local scout leader, such as Summer Camp. Small Dole Sussex (August 1949) and Camping at Stonewall Park (May 1987). Other Screen Archive South East films include [Leigh Scouts Camp 1935] (1935) and [Lindfield Scouting Activities: Jubilee Jamboree] (ca. 1957).

“Brighton History Centre holds an extensive range of material for the study of Brighton's history and culture, both past and present.” The collection includes newspapers and periodicals for Brighton and the region; books and pamphlets on Brighton; an extensive collection of photographs, postcards and slides, maps; Brighton and Sussex ephemera, including theatre, cinema and sporting programmes, scrapbooks and posters; oral histories of local people. A catalogue listing further references and resources accompanies a selection of films about Brighton and Hove (from Screen Archive South East’s collection and the National Film and Television Archive) is available online from The Keep.
http://www.thekeep.info/brighton-hove/

The Brighton and Worthing Deaf Association featured in this film is now known as The Sussex Deaf Association. “The Association is concerned with the welfare and needs of deaf people in Sussex.” The website provides a useful Links Page, including links to national Deaf Associations and Institutes.
http://www.sussexdeaf.co.uk/

The official website for the Scout Association UK.
http://scouts.org.uk/home/