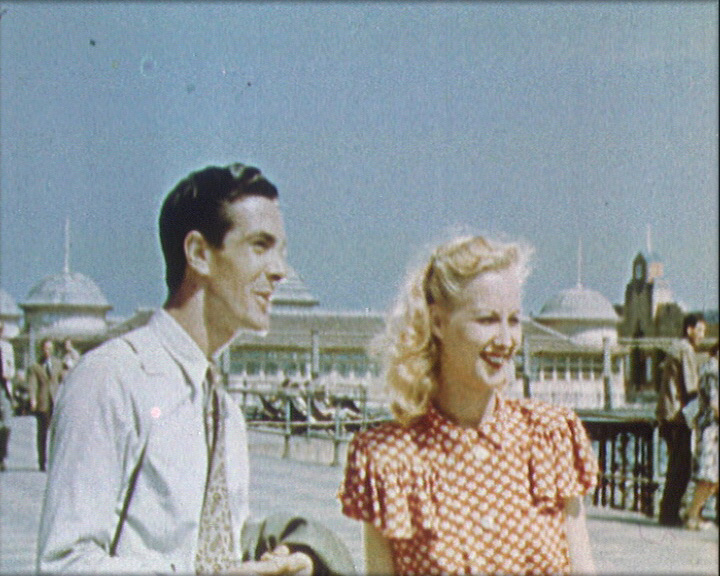 The young American man sits in his back garden with his younger brother. His memories of his trip to England begin with his meeting, at a fourteenth-century church, the vicar who plans a tour of East Sussex for him. In Battle he visits the abbey, and takes in the view over Telham Hill and Senlac. He walks around the abbey and cloisters, and discovers the ruins of the high altar where King Harold died. He photographs the Strand Gate in Winchelsea, and visits a number of other buildings in the town. His visit to St Thomas the Martyr Church shows one of its stained-glass windows from the interior. The young man continues his walk around the ruins of the old town wall. The next town he visits is Rye, where he sees the harbour and admires the town’s half-timbered buildings. The commentary refers to famous names associated with the town. Views of St Mary’s Church, including the clocktower with its golden quarterboys, are followed by a view of John Fletcher’s house. The film cuts back to the American’s garden, his young brother playing with a bow and arrow, inspired by stories of a visit to Camber Castle. The American’s tour continues with a visit to Richard II’s Bodiam Castle. After seeing Hastings from the hillside he heads down to explore the town. He finds the Dutch cannonball in the wall of St Clements church, looks at buildings in All Saints Street and visits All Saints Church before getting lost in the town’s alleyways. Back in his garden, he shows his brother photographs of the smugglers’ caves. In the fishermen’s quarter in the harbour he walks around the wooden huts, known as net shops. Fishermen sit next to their boats and mend their nets outside their net shops. Views of boats and activities around the harbour. The young man heads up to the ruins of Hastings Castle and takes in the views over the town and seafront. The young man makes for the seafront. On the promenade he bumps into a young woman he had met in London. They explore the contemporary attractions of Hastings and St Leonards together - swimming in the sea, walking along the promenade in front of Marine Court, and taking a taxi to a concert. They watch rowing boats and sit by the pond in Alexandra Park. At the Marina Bathing Pool lido the young man dives off the high-board while the young woman watches. He photographs her in front of a windmill and they go walking along the cliffs at Fairlight. They sit at Lovers’ Seat and admire the view over the sea. The film cuts back to the American’s garden - the young man and woman are together. He reveals that he married her.

Sands of Time (1949) was the first publicity film to be commissioned by Hastings Council. The fictional narrative style of the film gives a slight twist to the straightforward listing of attractions often used for tourist publicity films.

The film could be considered as a vehicle to kick-start the tourist industry after the war. It promotes the county’s historical sites, then focuses on Hastings as a seaside resort. The role of the American in the film, as a ‘respected outsider’, was, perhaps, a cementing of the established Anglo-American alliance, as well as being a way of ‘selling’ Britain back to the British during a time of relatively low national esteem.

Screen Archive South East has many other films relating to tourism and/or the promotion and publicity of seaside resorts. Magical Margate (ca. 1925) is the earliest example in the collection. A Holiday to Jump At (1954), At the Sign of the Ram and Gate (1957) and All Go Margate (1970) are examples of publicity films commissioned by local councils. Made by a local amateur film-maker, Brighton (1957) is a colourful portrait of a seaside resort. Winchelsea and its Surroundings. A Day with Harry Furniss and his Sketchbook (ca. 1920) features a similar geographical area to Sands of Time (1949).

These museums hold a variety of items and documents relating to the history of East Sussex.

Hastings Library has the largest local studies collection in East Sussex. It includes books, maps, press cuttings and other material relating to the local area.
http://www.eastsussex.gov.uk/libraries/find/hastings/default.htm