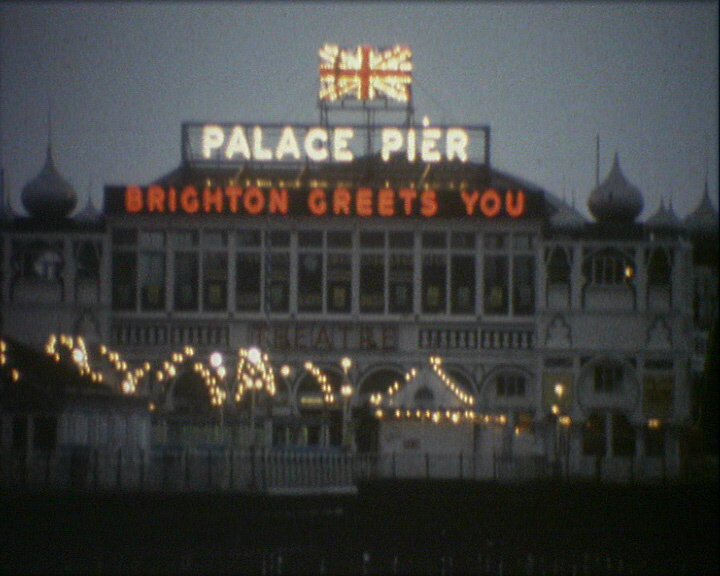 The film opens with shots of Brighton seafront on an overcast day - only one flag advertises the Brighton Festival. BBC presenter Joan Bakewell is filmed walking along Madeira Drive before interviewing a host of Festival participants - artistic director Ian Hunter talks about the Festival's value to local residents; musicians Daniel Barenboim and Jacqueline du Pré discuss Festival concerts; composer David Cain assesses audience reaction to the premiere his new work 'Mass For Tomorrow'; sculptor Jesse Watkins talks about his piece 'The Talking Sculpture'; poet Adrian Henri performs his science fiction-inspired poems whilst traversing playground rides dressed as an astronaut; Mr Hicks of the Brighton Youth Theatre bemoans the lack of drama at the Festival; Walter Eysselinck, director of the Arts Centre of Sussex University and playwright Janet Burroway discuss art culture at the Festival whilst riding aboard the Volk's Railway. The interviews are interspersed with images of Festival events and exhibits - students from the College of Arts create chalk drawings on the pavement of King's Road Arches; electronic music from 'Mass for Tomorrow' is played over images of St Peter's Church; colourful modern sculptures by sculptors including Barbara Hepworth, Henry Moore and Francis Morland occupy the grounds of The Royal Pavilion. In addition, the film contains a series of vox-pops which gauge the reactions of the visitors to the Festival - most are bemused by the modern artworks!

[Late Night Line-Up - Brighton Festival] (1968), which does not appear to be fully edited to broadcast quality, formed part of an hour-long BBC2 programme called "Late Night Line-Up". "Late Night Line-Up" was a nightly arts discussion programme which was on air between 1964 and 1972. The series began in the same year as the introduction of BBC2, a channel which experimented with new types of content. The series catapulted its only female presenter, Joan Bakewell, into a 1960s icon and quickly gained a reputation for lively, intellectual debates, paving the way for future arts review series. The format of [Late Night Line-Up - Brighton Festival] (1968) mirrors that of the series - it critiques the Festival (which ran from 27th April - 12th May 1968), using interviews and images to stimulate what would have been a studio-based discussion about the merits of the Festival and its potential for the coming years. The timing of this programme was therefore significant - the Festival, which was only in its second year, had been established as a local celebration of classical music - it quickly developed into a multidiscipline, international arts festival. Consequently, [Late Night Line-Up - Brighton Festival] (1968) is of interest for several reasons - it provides a record of Brighton Festival in its very early days and illustrates the approach taken by a national broadcaster to the cultural debate which surrounded it.

A pamphlet produced for the 1968 Brighton Festival reads, "The Brighton Festival, successfully instituted in 1967, aims at presenting exciting young performances and stimulating ideas for the future in company with great artists of the present and the masterpieces of the past. In 1968 a special feature is being made of the Film with a weekend conference, an exhibition, the commissioning of a new experimental film and a series of Science Fiction films being shown during the period. Science Fiction is also the subject of a weekend conference and it will be reflected in a poetry reading, music and film."

This British Movietone newsreel records events at the 1973 Brighton Festival when the seaside resort was turned into India of the 1800s .The film record can be found on The British Universities Film and Video Council's News On Screen database.
http://bufvc.ac.uk/newsonscreen

The educational website Screen Online contains an overview and analysis of the history of the Late Night Line-up series made between 1964-72.
http://www.screenonline.org.uk/tv/id/994718/