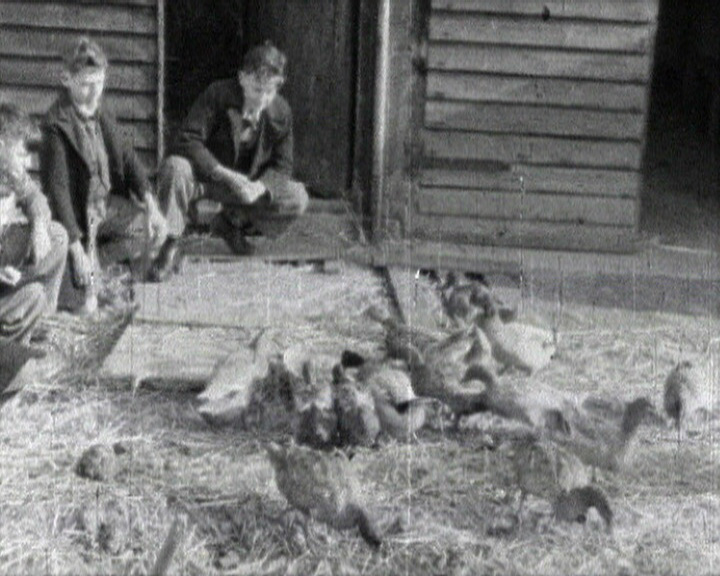 The school bell rings and a group of pupils gather to listen to the leader of the Young Farmers' Club (YFC) giving a talk on 'our farming year'. The film proceeds to show farming activities across the months. February sees three boys feeding sheep and ducks in the pens located on school grounds. Sheep are sent for slaughter in March (one is manhandled into the back of car for transport), the children plough and sow the land and are shown how to dag sheep. A farmer shows the YFC the new lambs in his fields in April. Boys work together to build a duck pen in May - the new ducklings arrive at Rye Station aboard a steam train. Male farm workers shear the sheep in June whilst the girls care for the rabbits. July teaches the girls how to cure rabbit skins and demands labour-intensive work on the land - children both observe and participate as sheep are branded and sprayed with D.D.T., tubers are picked and sheep dipping commences. The schoolchildren also entertain parents at an open-day. In August the children's work comes to fruition - honey is distilled into jars and wool is spun on spinning wheels. The sheep are treated for disease in September and the potatoes are stored in clamps during October. The YFC hold their annual meeting in November, proudly displaying profits of £210 for the year and the boys help to fell a large tree. In December the YFC pay a visit to Leasam Farm and celebrate the end of the year with a fancy-dress Christmas party.

The Young Farmers' Club (YFC) was originally formed in 1936 by Rye Secondary Modern School's new headmaster Mr A.W.Blackman - he was interested in practical education and rural studies. The evacuation of schoolchildren and the requisitioning of the school by the government during the Second World War led to the disbanding of the club. It was reintroduced in 1945 - animals, including twelve Kent ewes, were purchased and local farmers offered advice and facilities for raising them. The club took place out of school hours and was essentially self-financing - running costs were covered by the selling of byproducts including honey, wool and goose eggs. In 1939 the club's profits were fed into the making of the film The School Farm (1949). It was made as a record of the activities of the YFC and would most likely have been screened with accompanying music and/or commentary. The YFC was gradually wound down when Rye Modern and Rye Grammar schools were amalgamated.

The 1944 Education Act introduced free secondary education for all children in England and Wales up to the age of fifteen. It established a tripartite structure of schooling wherein pupils were selected to attend grammar, secondary modern or technical schools on the basis of their 11+ exam results. Children who failed the 11+ were typically sent to secondary modern schools such as Rye Modern. These schools emphasized practical rather than academic education, offering pupils schooling in agriculture, horticulture, woodwork, domestic sciences, etc. The 11+ selection process described above became increasingly unpopular as the years passed - concerns were raised about the inequalities inherent in the system. For example, grammar schools were dominated by children from the middle-classes and tended to receive disproportionate, higher funding from the Local Education Authorities (LEAs). It is interesting to consider The School Farm (1949) with reference to these factors - the film was financed without the aid of the LEA and offered a positive representation of the secondary modern system - the children are smartly dressed and enthusiastic and the activities are shown to be essentially inclusive. Therefore, although made to record the activities of the YMC, the film could be viewed as a publicity exercise, one which promoted the fledging education system. The system was replaced in the 1970s by non-selective comprehensive education.

The events of the Second World War necessitated a marked increase in the growing of foodstuff in Britain. This led to governmental campaigns such as 'Dig for Victory' which encouraged citizens to grow vegetables on any available land. In [Fernhurst School: Gardening] (1941?), which is housed at Screen Archive South East, children are seen tending to vegetables on school grounds - an activity which was adopted and continued after the War at Rye Modern School.

Copies of this book are held at various East Sussex libraries.

A day-in-the-life at Walton County Secondary School, a Secondary Modern School in Essex. This film is available at the East Anglian Film Archive.
http://www.eafa.org.uk/

"Girls learn woodwork and boys learn cookery at a Secondary Modern School in Oxfordshire." The film can be accessed via the British Pathé Website.
http://www.britishpathe.com/

Children are taught about farm animals and plants at Wrotham Secondary School in Kent. The film can be accessed via the British Pathé Website.
http://www.britishpathe.com/

Two brief letters written by the film-maker of The School Farm (1949) and his widow regarding the Young Farmers' Club at Rye Modern School are held on file at Screen Archive South East.

This episode from the BBC series Nation on Film uses archive film to chart the rise and fall of secondary modern and grammar schools in England and Wales during the 1940s, 1950s and 1960s.
http://www.open.edu/openlearn/whats-on/ou-on-the-bbc-nation-on-film