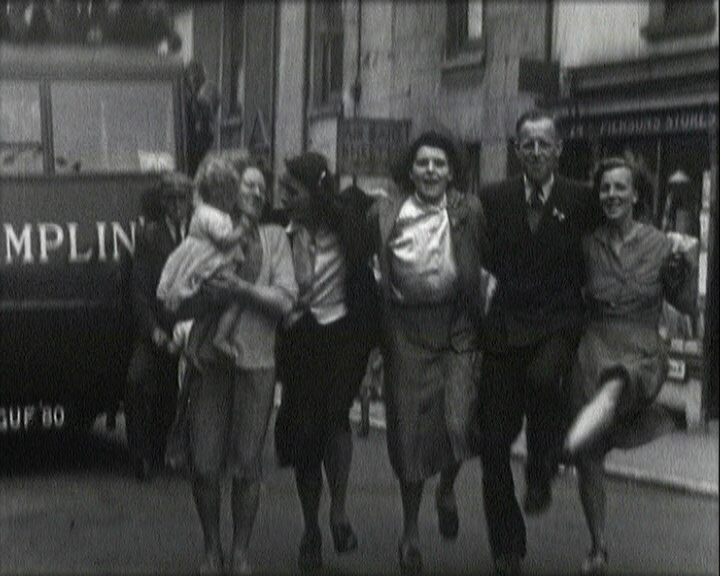 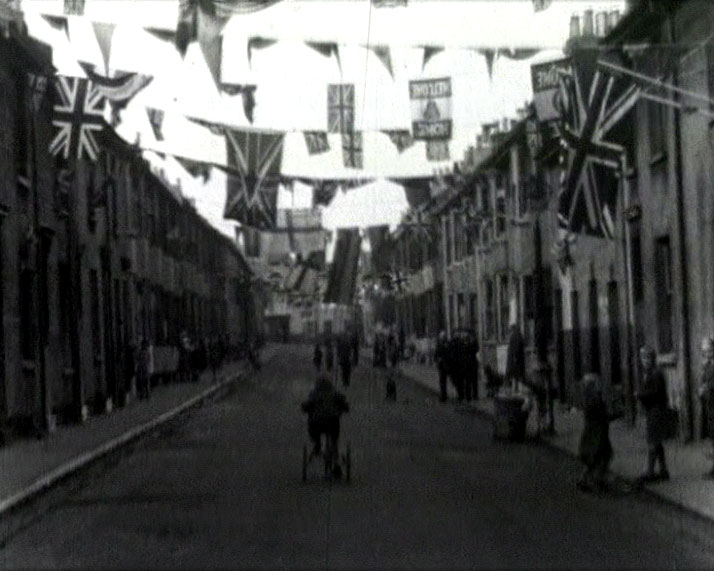 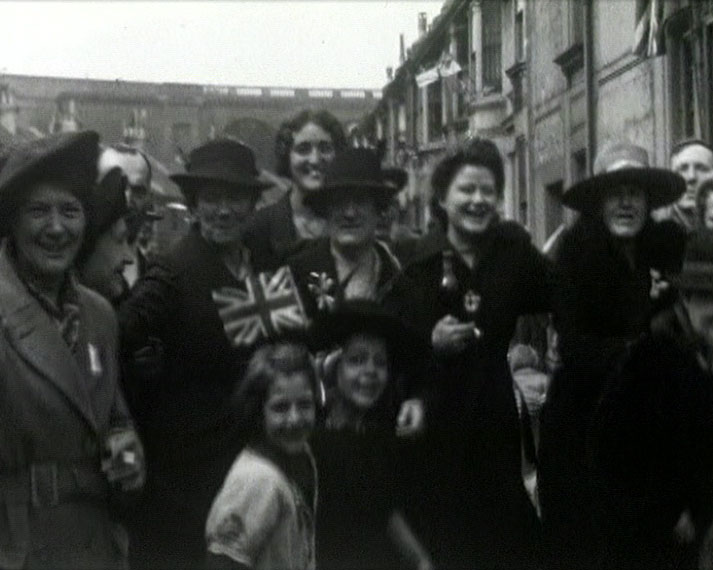 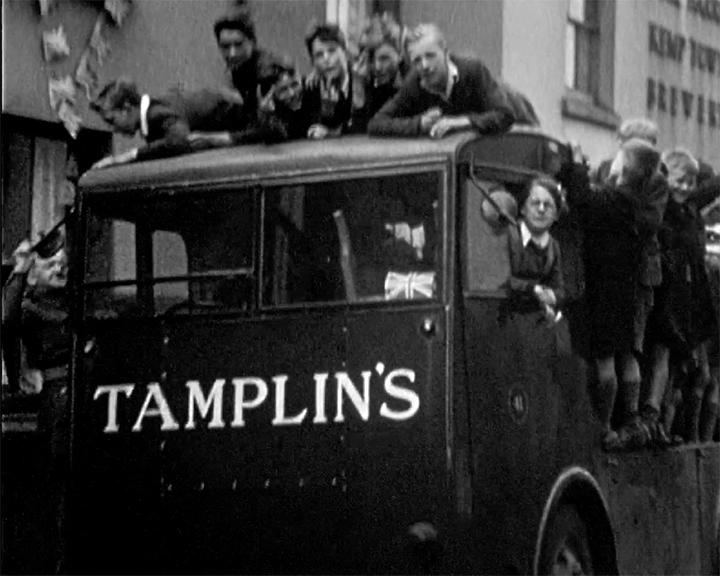 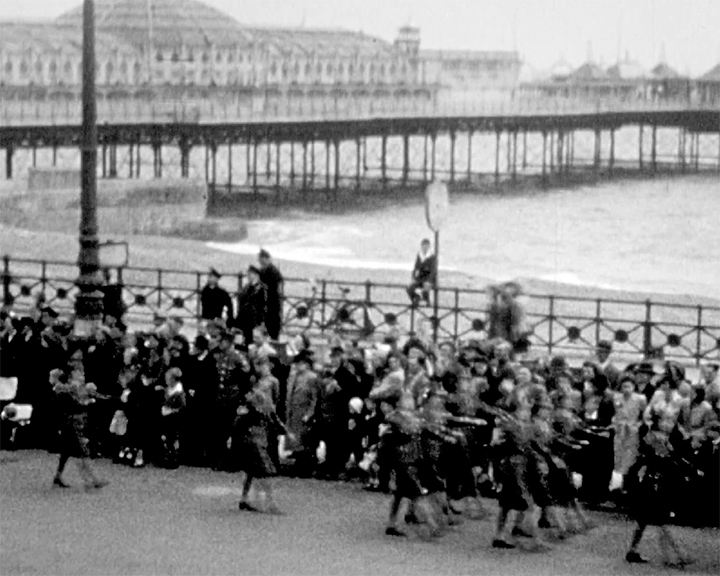 A black and white amateur film showing elevated views of the Brighton seafront between the Palace and West Piers followed by joyful street scenes; flags and bunting decorating the buildings and men, women and children dance merrily in the streets. A Tamplins van drives along the street overflowing with people riding on the back. Crowds gather outside the Town Hall and military bands play and march past. The Mayor of Brighton appears on the flag-covered balcony and reads the Peace Proclamation (Tuesday 8 May).

A procession of choristers make their way into St Peters Church. Street parties take place on several different streets; children wearing party hats sit at long tables in the middle of the street. Men and women dressed in fancy dress sing for the camera. A man dressed as a clown sings with a group of children on a stage. Another shot of a street party shows people in high spirits waving triumphantly at the camera.

Choristers, clergy, aldermen, dignitaries and the mayor and mayoress are shown leaving the Civic Ceremony, led by the Bishop of Lewes, at St Peter’s Church (Sunday 13 May). Crowds of onlookers watch the Victory Parade along the Brighton seafront; the parade includes men and women from all the services. Finally, the mayor and mayoress join in with the festivities, meeting and greeting people at several of the street parties. 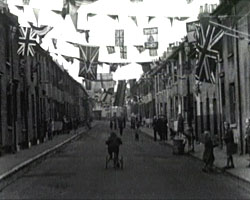 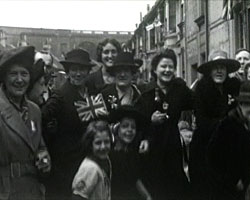 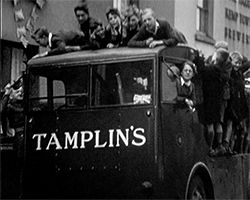 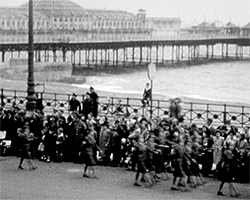 [VE Day Celebrations in Brighton] (May 1945) appears to have filmed by amateur cameraman Bill Stewart, but unfortunately Screen Archive South East holds no further information regarding the production context of the film.

The film does serve, however, as a record of the celebrations which took place across Brighton in the week after victory in Europe was announced. Churchill's speech confirming a much-anticipated victory came at three o'clock on Tuesday 8 May and the Mayor, Cllr A. V. Nicholls, made a proclamation of peace from the Town Hall at six that afternoon, which was relayed through loudspeakers. Several thanksgiving services took place in Brighton that day, with a United Service at St Peter’s Church on the Wednesday, attended by the Mayor and Mayoress amongst other local dignitaries.

One of the streets featured in the early part of the film is Seymour Street - home of the 'Tamplins' Brewery in Kemp Town, Brighton, which was in business until 1963. In this part of the film people are seen dancing in the street and riding on Tamplins vans. Other footage appears to be of celebrations in the Hanover area of Brighton.

During the week following the impromptu celebrations, street parties took place all over Brighton. The whole community joined in the festivities, which were usually planned as children's tea parties, followed by "open-air socials" for the adults. On VE day itself the celebrations in Brighton were interrupted by rain, with local residents continuing their parties in a house, nearby pub or church hall. Several street parties were reported in the local Argus newspaper on Monday 14th May. The Mayor visited several and his visit to Bute Street is recorded on this film. In it, we see the Chapman family, who owned the local greengrocers shop, greeting the Mayor and a 7 year old Miss Townsend presents the Mayoress with flowers.

On the Sunday (13th) the Civic Ceremony at St Peter's Church was held in the morning and was relayed outside the church for those unable to gain admission. The Victory Parade took place in the afternoon. The services that took part in the parade included the Civil Defence and voluntary units, the Women's Land Army and Pre-Service Units. The Parade marched from Madeira Drive to Preston Street and the Salute was taken outside the Old Ship Hotel by Brigadier K. E. S. Stewart, supported by the Mayor, Mayoress and members of the town council.

“The Mass-Observation Archive specialises in material about everyday life in Britain. It contains papers generated by the original Mass-Observation social research organisation (1937 to early 1950s), and newer material collected continuously since 1981.” The archive holds a large amount of material relating people’s experiences during wartime. Of particular relevance to this film would be “VICTORY CELEBRATIONS 1945-46". Consisting of diary extracts, reports, interview responses and other relevant printed material, this collection is a record of reactions to the end of war over the periods leading up to and including VE Day (8 May 1945) and VJ Day (15 August 1945). Included is a review of the planned Victory Day, 8 June 1946, in the form of directive responses, questionnaires and reports.” The Archive also holds records of VE Day memories sent into Television South’s Coast to Coast by its viewers in 1985. A search facility is available online.
http://www.sussex.ac.uk/library/massobs/introduction.html

Screen Archive South East holds copies of photographs and written accounts by people who were present at the VE Day celebrations in Brighton.