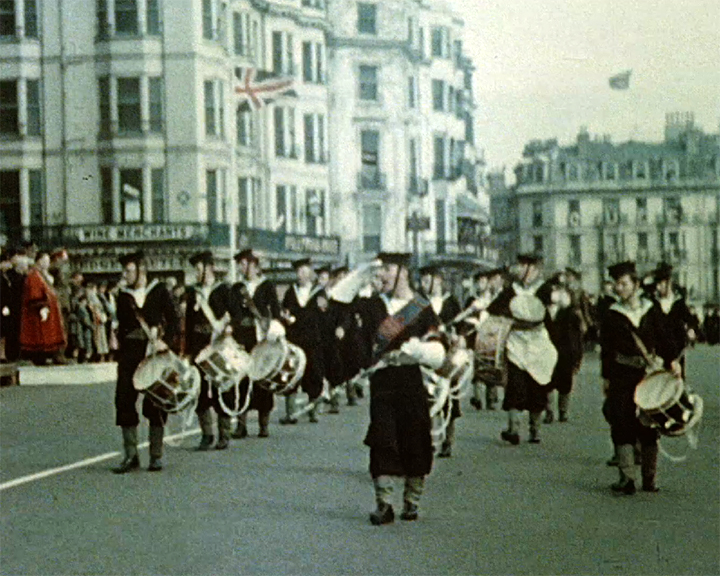 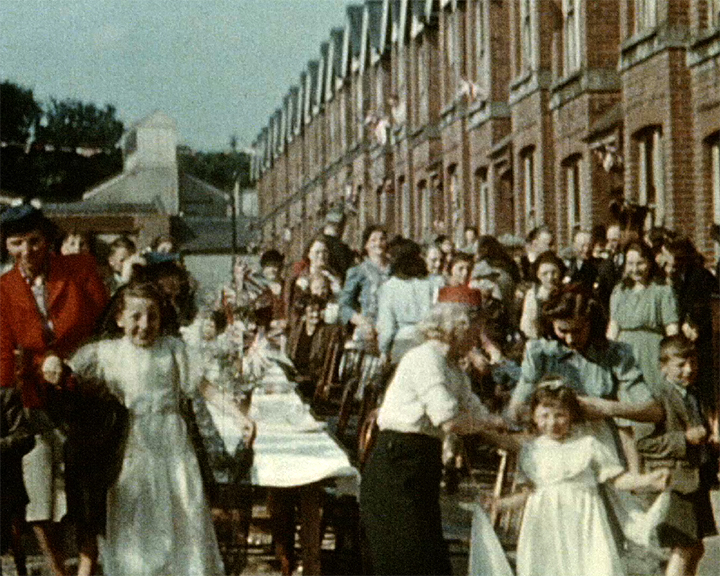 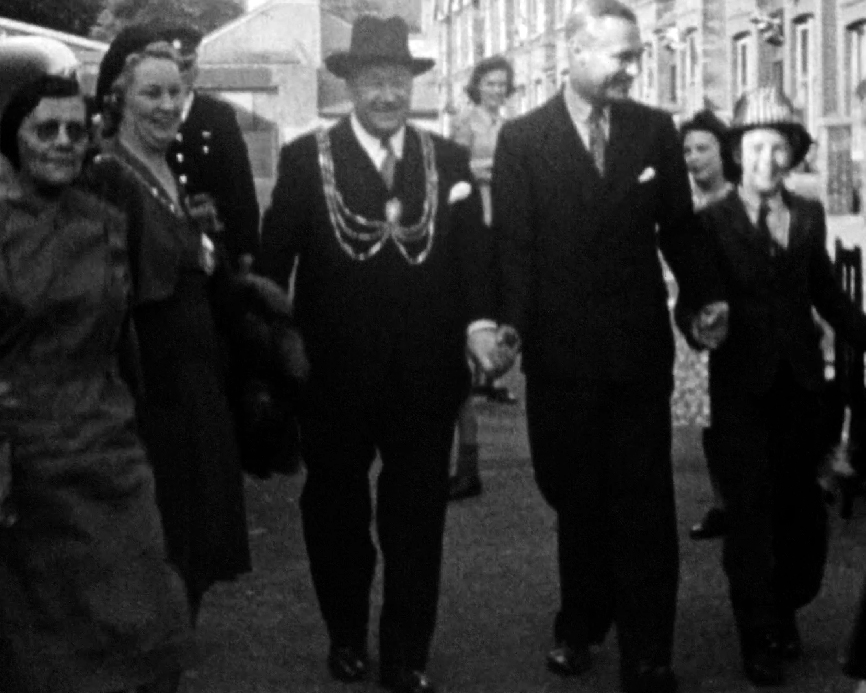 The film opens with the Brighton coat of arms and motto 'In Deo Fidemus' with the titles 'This is a WINRO film', 'Photography by Winston Robinson'.

Intertitle: 'End of War in Europe 1939 -1945 “VE” Day - His worship the Mayor of Brighton (Councillor A.V. Nicholls, J. P.) reads Peace Proclamation May 8th,1945'. The film begins with scenes outside the Town Hall. Many people and military groups gather and watch as the peace proclamation is read from the balcony by the Mayor and a priest also addresses the crowd. Dignitaries and Aldermen fill the balcony which is draped with allied flags. On the street, the Royal Sussex Regiment parade and the military band wait by the regimental insignia of the White Roussillon Plume . The crowds move off. The Mayor and Mayoress stand together looking at the camera.

Intertitle: 'National Day of Thanksgiving - The Mayor and Mayoress (Councillor and Mrs A.V. Nicholls) and The Bishop of Lewes (The Reverend Hugh Lewen attend Brighton Civic Ceremony - Sunday, May 13th, 1945'. A procession of clergymen, choristers, choir boys, the Mayor, Aldermen and dignitaries make their way into St. Peters Church.

Intertitle: 'Victory Parade - All Services - Brighton, Sunday, May 13th, 1945'. A panorama of the crowd gathered on the seafront with the Mayor and his Aldermen standing in front of the Old Ship Hotel. The victory parade includes representatives from all forces: the Navy, Army and Air and include men and women personnel. These are followed by by the Civil Defence Services.

Intertitle: 'The Mayor and Mayoress of Brighton (Councillor and Mrs A.V. Nicholls) and Flight Lieutenant W. Teeling, M.P. Join the Victory Street Party Celebrations'. Intertitle: 'Patcham (Eldred Avenue)'. Celebrations on grassy hill with a train passing in the background. The Mayor and Mayoress and Lieutenant Teeling arrive, chat and share party food with the children.

Intertitle: 'New England Street'. A view of the street bedecked with bunting and families gathered at the street party. There is a sign pointing to the Air Raid Shelter. The Mayor's car is parked (number plate GCD 1). The Mayor, elevated, speaks to the crowd and people mingle and celebrate in the street, some wearing paper hats. A small band plays (drums and two on accordions) and the crowd sings along. The Mayor, Mayoress and Lieutenant talk with the people and drink tea.

Intertitle: 'Vere Road'. The street is decorated with flags and flowers and cakes are laid out on the trestle-style table. The Lieutenant speaks to a group. The Mayoress is seen holding a bunch of flowers.

Intertitle: 'Blaker Street'. The Mayor speaks on a decorated podium with a banner reading God Bless Our King hung in the background . The Mayoress is handed a child to hold. Intertitle: 'Music Maestro Please'. The Mayor plays piano as small children gather around him to watch, some singing along. People dance and sing. The Mayoress is seen with a large bouquet of flowers.

Intertitle: 'Tillstone Street'. A large street party with the group waving at the camera.

The following sequences are in black and white: people dancing in circles while the Mayor and Mayoress talk to an elderly man. The Mayor, Mayoress and Lieutenant are then seen joining in the dancing with the group.

Intertitle: 'Newmarket Road'. People gather in front of the camera in fancy dress together with the Lieutenant.

Intertitle: 'Kimberley Road'. The Mayor and Lieutenant speak to the crowds at the street party. Girls drink tea together by a table laden with party food.

Intertitle: “The Mace bearer to the rescue”. The chauffeur feeds a young girl from a large bowl of trifle. Crowds gather in front of the camera.

Intertitle: 'The Fun of the Fair. The film resumes in colour to show people arriving at Coneley's fairground at the bottom of East Brighton Park on Wilson Avenue. Many fair rides and caravans can be seen. A banner reads 'Coneleys - Cokernut throwing' . People enjoy Matthews Rodeo Ride, swing boats and girls enjoy ice creams. Next we see 'Coneley’s Brighton Speedway” and a merry-go-round for young children. People have fun on the many rides and stalls and children eat ice cream.

Trolley bus 26A to Preston Drove makes its way southwards along the Steine. The trolleybus is decorated with flags and images of the three allied leaders: Winston Churchill, F.D. Roosevelt and J. Stalin. A bus then makes its way up North Street past Hanningtons. End Title: The end 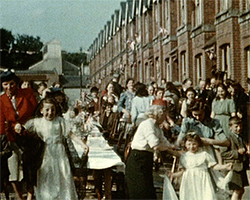 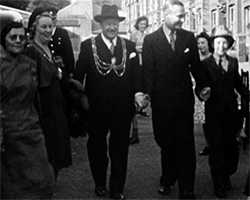