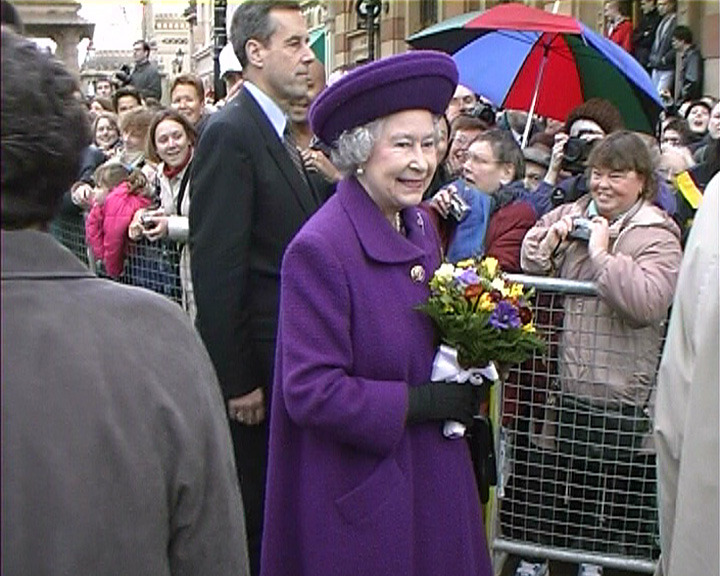 Crowds begin to gather outside the Corn Exchange in Brighton, standing behind barriers in anticipation of HM The Queen, Elizabeth II's arrival. A group of police officers stand on the pavement outside the Corn Exchange dressed in high visibility clothing. The Queen dressed in purple, arrives by car to both applause and protest - a small group of anti-hunt protesters make themselves known holding placards and flags across the street. HM The Queen is greeted by Brighton and Hove Mayor Andy Durr who ushers her into the venue, closely followed by a female household assistant and a senior police officer in a dress uniform holding a walking cane. Approximately three hundred representatives from Brighton and Hove's eclectic communities have been invited to the Royal reception - they wait inside the Exchange, hopeful of an audience with their Sovereign. The camera remains close to The Queen as she views the Millennium Quilt and watches a performance by children from a local circus school. The Duke of Edinburgh joins the reception, before departing with the HM The Queen. A group of police officers meet in the road after HM The Queen has departed. In spite of the rain, large crowds fill the pavements outside the Pavillion Buildings on North Street and Hanningtons department store on Saint James Street, where HM The Queen Elizabeth II and Duke of Edinburgh enjoy a brief walkabout. The Royal motorcade sets off again along the high street towards Churchill Square. The film closes with iconic images of Brighton - a roadside sign reads 'Welcome to the City of Brighton and Hove' and the Royal Pavilion, the Theatre Royal and statues of King George IV and Queen Victoria stand proudly in the Spring sunshine.

HM Queen Elizabeth Visit to Brighton (2001) was filmed by Rod Willerton, Screen Archive South East's Technical Officer and member of the Haywards Heath Cine and Video Society. After corresponding with the Mayor's office, Screen Archive South East was granted access to a portion of the Royal visit to Brighton, allowing for the production of an amateur film which has unparalleled intimacy. Unlike other amateur films which record Royal events from a public distance, Rod Willerton was able to film 'up close and personal', similar in style to official news reports. Screen Archive South East commissioned the filming of the event with the aim of adding it to the Archive's collection of important events in the history of Brighton and Hove.

Brighton and Hove, Wolverhampton and Inverness were all granted city status to mark the Millennium. It is an honour conferred by the Queen, albeit sparingly, only being granted as a mark of special distinction.

Screen Archive South East holds a number of amateur films which have recorded Queen Elizabeth's visits to the South East across the decades. They offer an interesting contrast to HM Queen Elizabeth Visit to Brighton (2001) in that they are typically brief records of the visit - they are filmed from a distance and from behind the public barriers, perhaps capturing only a glimpse of the Queen as she drives by in the Royal motorcade. These include [Gala Day at Chichester. Visit by the Queen] (1956), [Brighton Pictures I] (ca.1963 - 1965), [Queen's Visit to Gillingham] (March 1968), [Vintage Car Race London to Brighton. Southbourne Holiday. Queen and Duke at Brighton] (1961; 1962) and Royal Maundy (1986) in which the Queen visits Chichester.

This supplement details the Royal visit to Brighton in photographs. A copy is held on file at the Screen Archive South East office.

A Vision of Britain Through Time

This website provides, "A vision of Britain between 1801 and 2001. [It includes] maps, statistical trends and historical descriptions." The site contains detailed historical information on Brighton and Hove.
http://www.visionofbritain.org.uk/index.jsp

The archived website of the former Department for Constitutional Affairs which was "responsible in government for upholding justice, rights and democracy". This page details the award of City Status, providing information on grants since 1900.
http://webarchive.nationalarchives.gov.uk/+/http://www.dca.gov.uk/constitution/city/citygj.htm