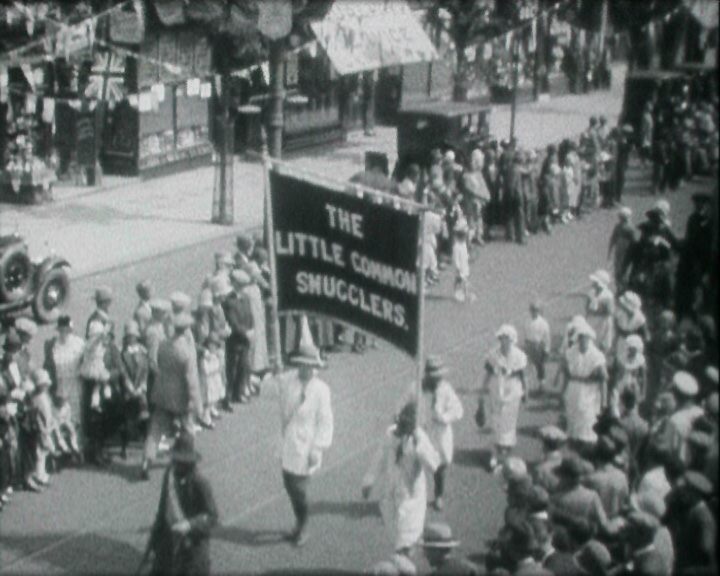 The mayor, dignitaries, choristers and other guests gather at the Town Hall. The streets are decorated with flags and bunting. Crowds watch as troops are inspected by the Lord Lieutenant Lord Leconfield. Outside the Town Hall the guests sing a hymn then proceed to the war memorial where the mayor lays a wreath. The procession is led by a mace-bearer, aldermen and scouts. Soldiers on horseback sound “The Last Post and the Reveille”. Crowds line the street and watch from windows as VIPs and the mayor exit a building and get into cars. A parade through the street follows, beginning with soldiers and artillery, including the Royal Sussex Regiment and the fire brigade on their fire engines. Elaborately decorated floats and a procession follows. The procession includes military bands, girl guides, scouts, and people in fancy dress such as the Michelin Man on a bicycle. Many of the floats are sponsored by local companies and charities, such as the Red Cross, and depict historical scenes featuring events and people from the town’s past, such as the ‘Little Common Smugglers’.

The second part of the film shows a pageant. It takes place in Egerton Park, has a cast of hundreds and is watched by a large crowd. The pageant dramatises events from the area’s history dating back to King Harold, King Stephen, Henry VII, Elizabethan times and the Restoration. Military scenes show soldiers in uniform from the early 1800s, followed by First World War re-enactments. The pageant ends with all the actors taking part in a walk-past. Scenes of the actors relaxing after the pageant shows two men, still in costume, eating ice-cream; many of the actors pose directly for the camera.

The theme of commemoration is prevalent in this compilation. The first part of the film illustrates the theme through the commemoration of the war dead. The solemn remembrance service is contrasted with the vitality of the parade through the town’s streets. There is a commemorative nature to many of the costumes and floats in the parade; many represent historical figures and events. The second part of the film shows how historical events are commemorated through a communal dramatic production. The pageant was an opportunity for members of the community to take part in a large-scale production celebrating the significant events in the town’s history.

Bexhill-on-Sea is also the subject of A Summer Memory of Bexhill-on-Sea (1960). Several other films in Screen Archive South East’s collection feature pageants. The “Pageant of Ashdown Forest 1929” appears in [Local Scenes and Family Pictures] (1927; 1929); taking part in the pageant is Christopher Robin Milne and children dressed as Winnie the Pooh and friends. [A Molesey Pageant] (1913) shows an Elizabethan-themed pageant taking place on Tagg’s Island on the River Thames.

Bexhill Museum collects, conserves, displays and interprets objects and associated information related to the history and natural environment of the surrounding area, to inspire people of all ages and promote learning and enjoyment.
http://www.bexhillmuseum.co.uk/

“Bexhill Library has a large local studies collection about the history of Bexhill-on-Sea and the surrounding district of Rother. The collection also covers the development of East Sussex in general.”
http://www.eastsussex.gov.uk/leisureandtourism/localandfamilyhistory/libraries/largecollections.htm

In addition to information for the modern-day visitor to Bexhill, this website provides a short history of the town including a useful timeline of the town’s historical buildings, some of which appear in this film and no longer exist.
http://www.discoverbexhill.com/historyofbexhill.php