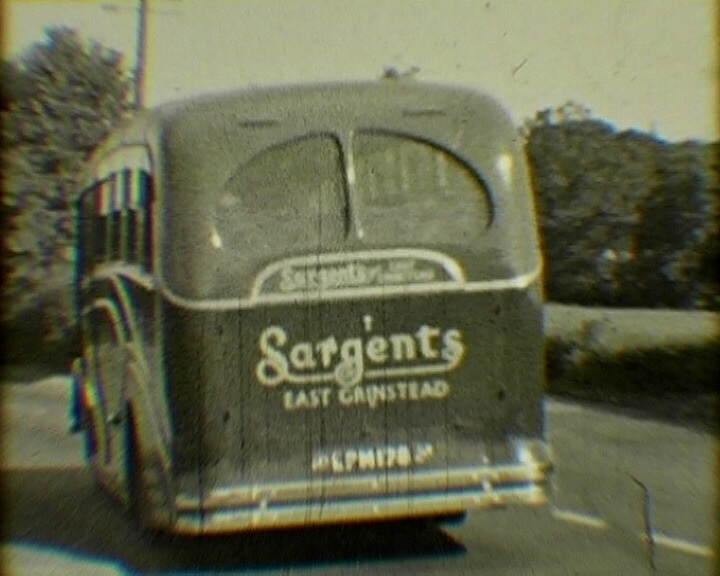 The first part of the film shows coaches on the road taking daytrippers to coastal and rural locations. There are shots of Sargent’s bus depot at East Grinstead; drivers in their uniforms pose next to their buses. Scouts on a bus trip. In between scenes of a horse race and football match there is a shot of the Sargent office. Coaches pick up passengers in a village; a group of men pose next to the coach. Brief scenes of various outings follow, mostly around country lanes, including one journey in the snow. In the company’s office a man and woman take telephone calls, while in the workshop a mechanic replaces a tyre. A close-up of a photograph of a man. A car rally takes place at Hobbs Barracks; cars, mostly Mini Coopers, drive around a course in the yard. Cars and people arrive at Sargent’s garage for a The Simca Show. At a petrol station a man uses a Wash & Vac machine to clean his car; the garage attendant sits in his booth. Further scenes of Sargent’s new car showroom in front of the old depot; Dodge trucks at the showroom. Children take part in a donkey derby. A television programme, presented by Shaw Taylor, is filmed at the Simca showroom. The film ends with action from an amateur football match.

The Sargent family's connection with motor vehicles and public transport began in 1919 when mechanic Henry James Sargent and his eldest son Alfred started a car hire service in East Grinstead. Ten years later the family introduced a two-bus service between East Grinstead and Brighton under the name of 'East Grinstead Motor Coaches'. The company increased in size and scope over the years, changing its name to 'Sargents of East Grinstead' in 1939. Apart from its public transport service, Sargents hired out coaches, managing to survive the Second World War restrictions by transporting evacuees and prisoners of war, amongst others. Sargents response to post-war governmental plans to nationalise the road passenger transport industry was to sell it coach business to Southdown Motor Services Ltd in 1951. The family continued their association with motor vehicles however, owning, for example petrol stations in East Grinstead and a commercial vehicle dealership. In the mid-1950s they also started a lengthy involvement with Simca cars, establishing a distribution business and a showroom in East Grinstead, under the names of 'Sargents of East Grinstead (Engineers) Ltd. [Sargent Bus & Coach Services] (1939 - 1977) therefore provides a visual record of many of the business ventures undertaken by the Sargent family.

Screen Archive South East holds two other films which were made by members of the Sargent family. These are entitled [Scouting. Camping. Jamboree] (1939?) and [Sussex Red Cross] (1960 - 1974), and centre around events in East Grinstead.

The Amberley Working Museum houses the Southdown Bus collection. “The collection aims to show the development of the motor bus in the South East, concentrating on the period up to the 1940s. It is supported by an extensive archive recording the history of Southdown Motor Services Ltd.”
http://www.amberleymuseum.co.uk/

The London Bus Mueum formerly The Cobham Bus Museum at Brooklands in Surrey, is dedicated to bus preservation; many restored vehicles are on display. The museum shares the Booklands Museum estate.
http://www.londonbusmuseum.com/

This website also has links to many other bus-related websites.
http://eastsussexomnibus.org/