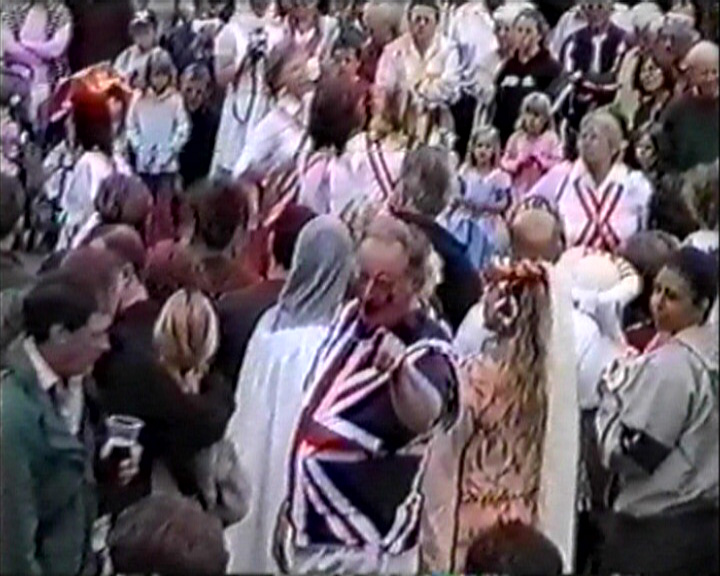 On 20th May 2002 local amateur cameraman David Shaw make a filmic tour of the village of Ightham, narrating the changes to the buildings and streets he has witnessed during the last six decades. Shops, a pub, the Methodist chapel, the post office, a doctor's surgery and orchards have all been converted into houses - modern housing estates sit alongside traditional cottages and houses once occupied by village notaries. The film also contains exterior shots of the village's community-centred buildings, notably St Peter's Church, Ightham County Primary School and the village hall. The village is relatively quiet - the flow of traffic along the narrow streets has been substantially reduced by Ightham bypass.

The Ightham Beacon is lit on 3rd June 2002, to the applause of watching villagers.

The village marks the Queen's Golden Jubilee on 4th June 2002 with a modern-day revival of the Ightham Coxcombe Fair. Final preparations take place on the decorations which adorn the village square before the community congregate at St Peter's Church for the Jubilee Service. In acknowledgment of the Fair's history, many of the churchgoers are dressed in medieval costumes. Following the service, the villagers walk in procession to the village where the Lord of the Manor proclaims the Fair open. Activities centre around the village square - visitors peruse the market stalls, participate in a circus workshop and watch local men competing in closely-fought rounds of tug-of-war. Street performances include a Mummers play, a recital by a woodwind quartet, Maypole dancing by pupils of Ightham Primary School and Morris dancing by a female troupe. A large section of the film is dedicated to the Punch and Judy show which delights the assembled crowd - local men and women act out a humourous version of a show more commonly played to children with puppets. The Fair comes to an end with the 'Golden Hop', an evening of 1960s music and dance at the village hall.

[Ightham Coxcombe Fair Jubilee Celebration] (2002) was commissioned by the Committee organizing the Ightham Coxcombe Fair as a visual record of the village's Jubilee celebrations. The film was made by local residents David Shaw, Elaine Bowen and Christine Brindley on a volunteer basis, with profits from subsequent video sales being fed back into the community. The images of the Golden Jubilee celebrations serve as an interesting record of a community coming together to mark a national event. The villagers of Ightham chose to mark the 50th anniversary of Queen Elizabeth II's accession to the throne with a revival of a Fair that originated in the 14th century. In the intervening years, the annual village fair gradually died out, being revived in 1977 for the Queen's Silver Jubilee and again in 1988 to commemorate the 1588 victory over the Spanish Armada. The emphasis on entertainment and commemoration at the modern-day Fairs encouraged a sense of community, a mood which was present in villages, towns and cities across the nation during the Jubilee years. This is evident in the Screen Archive South East film entitled Mid Sussex Newsreel (2002) in which some of the Mid Sussex Golden Jubilee celebrations were filmed.

[Ightham Coxcombe Fair Jubilee Celebration] (2002) is given added value by the introductory tour of the village which opens the film. Through images and narration, film-maker David Shaw offers a personal and informative record of a village much changed, providing an insight into the development of a Kentish village during the latter half of the 20th century.

“The Mass-Observation Archive specialises in material about everyday life in Britain. It contains papers generated by the original Mass-Observation social research organisation (1937 to early 1950s), and newer material collected continuously since 1981.” The collection entitled 'The New Project (1981 onwards)' contains responses to questionnaires on a variety of topics, including the Golden Jubilee. A search facility is available online.
http://www.sussex.ac.uk/library/massobs/introduction.html

This website provides community information on the parish of Ightham, including details on local history.
http://www.ightham.org