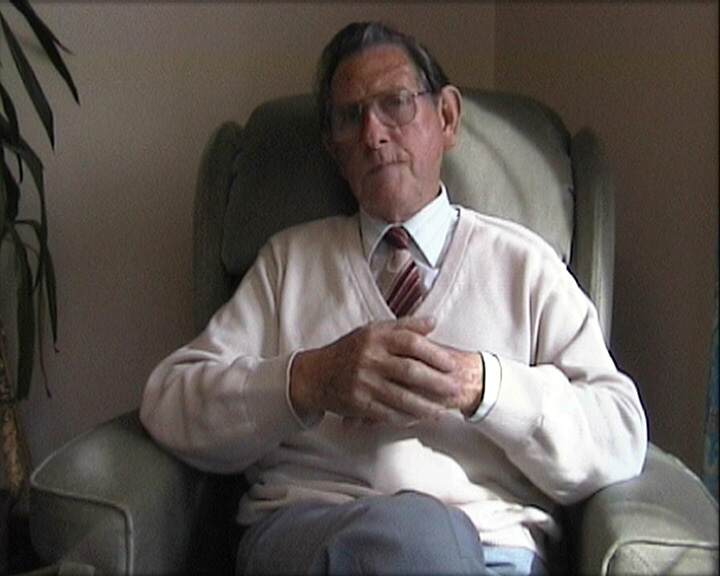 Speaking from his armchair in the Hospice in The Weald, former serviceman Fred Brushett introduces himself and his reasons for making the film. He proceeds to recount his memories of being sent, as a 21 year old soldier in the 113 L.A.A. Regiment R.A., to Bergen-Belsen at the time of its liberation from the Nazis. He recalls the sights, sounds and people he encountered with vivid honesty, endeavouring to present the truth to the viewer.

As a British soldier Fred dutifully carried out his orders, but it is clear that his job of creating and filling mass graves and of supervising members of the SS such as Irma Grese, had a profound personal impact. This is obvious when he concludes that his regiment did their job successfully but that his decision not to have children was a direct result of his experiences at the concentration camp. The film, which is interspersed with archive photographs of Bergen-Belsen, ends with a close-up image of Fred standing, rifle in hand, over one of the open mass graves in 1945.

The British at Belsen (2002) was made as part of the Rosetta Life arts project, a project which enables people with life-threatening illnesses to tell their stories through a range of artistic disciplines, including photography, painting and poetry. Whilst a patient at the Hospice in the Weald, Fred Brushett, under the guidance of the Hospice's artist-in-resident, chose to tell his story, committing his memories to film, "so that future generations will know some of the horrors of Belsen concentration camp." (Fred Brushett November 2002) The film uses a talking head format, allowing Fred to express his disturbing memories in a simple yet effective way - his direct address engages the viewer and encourages an evaluation of the truth of his witness statement. Upon its completion, Fred Brushett deposited his film with various archives where it serves as a uniquely important social and historical record.

Bergen-Belsen concentration camp was liberated by the British on 15th April 1945. Upon their arrival they found thousands of prisoners dying of malnutrition and disease (typhus). One of the first priorities was to curb disease - Fred Brushett's regiment was one of those involved in this, burying the dead in mass graves, evacuating the living and burning the camp to the ground. An estimated 50,000 people, including Anne Frank, died in the camp prior to its liberation - a further 13,000 died of disease and malnutrition shortly afterwards. The SS staff who had survived the typhus epidemic were later tried by the British at the Belsen Trial - Irma Grese, whom Fred Brushett recalled supervising, was sentenced to death by hanging.

The Centre for German-Jewish Studies at The University of Sussex is, "a major institution for the study of the history, culture and thought of Jews in Central Europe and for the training of a new generation of teachers and researchers in this field. The primary aim of the Centre’s teaching and research activities is the re-evaluation of how the history of Jews in German-speaking lands is studied....[Another] key objective is to research the history of Jewish refugees and their families to the United Kingdom during and after the Second World War. The Centre also focuses on projects related to the history of anti-Semitism, the Holocaust and its effects on post-war history until today... The Centre's archival collection, located in the University of Sussex Library, [includes] materials documenting the histories of German-Jewish families since the Enlightenment, including diaries, letters, oral testimony, survival narratives and other biographical sources recording the history of refugees."
http://www.sussex.ac.uk/cgjs/

In addition to its permanent exhibits, the collections of the Imperial War Museum include Film and Video, Photographs, Sound, Art, Documents and Printed Books. The collections’ database is searchable online.
http://www.iwm.org.uk/collections-research

"The Wiener Library [in London] is the world's oldest Holocaust memorial institution, tracing its history back to 1933...[It] collects material related to the Holocaust, its causes and legacies." The Library's book and pamphlet collections are searchable online.
http://www.wienerlibrary.co.uk/

The British Movietone newsreels and other newsreel companies presented news stories and images of the Second World War to the viewing public, including images of the concentration camps. These film records can be searched on The British Universities Film and Video Council's News On Screen database.
http://bufvc.ac.uk/newsonscreen

The Pathé newsreels filmed a vast amount of footage during the Second World War, some of which concerns the liberation of the concentration camps and the subsequent war crimes trials. The films can be accessed via the British Pathé Website.
http://www.britishpathe.com/

The website for Rosetta Life, "a unique artist-led organisation delivering residences in hospices and hospitals, enabling people with life threatening illnesses and their families to tell the stories that matter to them, through video, photography, drama, music, dance or fiction and to share them with an audience of their choice."
http://www.rosettalife.org/

The Story of Belsen

This Durham County Record Office website contains the transcript of an account of events at Bergen-Belsen during the time that Fred Brushett was stationed there, as well as other documents, maps and a list of related websites on the history of the site. The County Record Office catalogue is searchable online.
http://www.durhamrecordoffice.org.uk/Pages/WhatWasBelsen.aspx