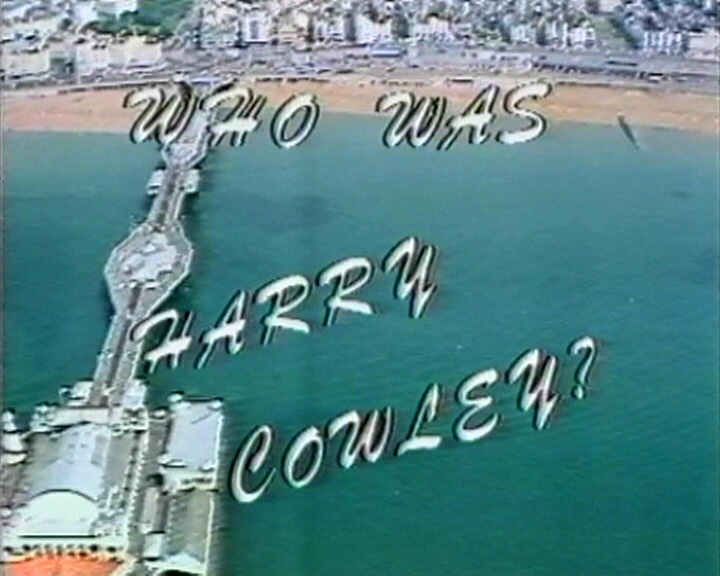 B&W photographs of Harry Cowley and related newspaper cuttings are accompanied by an audio reading of one of Harry's speeches about pensioners' rents. Aerial shots of Brighton seafront and The Level are followed by vox pops with elderly locals about their memories of Harry Cowley. The film proceeds to narrate Harry's lifestory using archive photographs and interviews with his peers. The stories, which include his work with Brighton's unemployed and the anti-fascist movement, are also told with reference to a biographical interview given by Harry to The Brighton Evening Argus in 1957 - in Who Was Harry Cowley? (1984) actors re-enact the meeting which took place between Harry and the newspaper reporter. Harry's work as a chimney sweep is also recounted by fellow worker John Marshall who then demonstrates the traditional method of sweeping a chimney. Harry's involvement with the establishment of an officially-recognized open market in Upper Gardner Street is detailed through interviews and archive photographs, and with colour amateur footage of the busy market in the early 1960s (this footage includes moving images of Harry). Harry is remembered for his leadership of the Brighton 'Vigilantes' - a group of 400 local war veterans who operated outside the law to house the unemployed and returning servicemen and their families, in essence inventing 'squatting'. The film ends with interviews with members of Harry's family, including his daughter Rose, and with an assessment of his community-driven work.

Who Was Harry Cowley? (1984) was produced by QueenSpark Books, an organization committed to publishing stories about Brighton and Hove residents through a range of media. The film, which was funded by a South East Arts grant, was made in conjunction with a book of the same name - together they were produced to raise awareness of Harry Cowley and his contribution to the city and the people of Brighton.

Harry Cowley was born in Brighton in 1891 - he would die there 80 years later, as a celebrated community worker who campaigned relentlessly for the rights of the poor, the unemployed, the aged and the dispossessed. Although his was a life marked by a lack of official recognition (perhaps as a result of his preference for 'direct action' and his commitment to the working-classes) he was championed by the people. Harry Cowley's legacy lives on due to the work of community groups such as QueenSpark Books and The Cowley Club.

Screen Archive South East houses a number of films which reflect upon the social upheaval of the 1930s. For example the compilation [Sussex, 1938. Advert for Daily Worker. Sussex 1939] (1938 & 1939) shows protest marches and meetings organized by the Sussex County Communist Party. The film The Great Depression (1929, 1930s & 1976) looks at the global impact of the Wall Street Crash, including strikes, unemployment and the growth of fascism.

Copies of this book, which was produced in association with the film Who Was Harry Cowley? (1984), are available at various East and West Sussex libraries.

"Our aim is to reproduce primary sources in such a way as you would find them in an actual archival repository; not piecemeal, but in their entirety."
http://www.communistpartyarchive.org.uk/index.php

This article looks at the work of Harry Cowley and his 'vigilantes' in regards to Brighton's housing problem. The article can be searched via the Time Magazine online archive.
http://www.time.com/time/archive/preview/0,10987,803581,00.html

This five-part article records Harry Cowley's life story - it features an interview with Harry Cowley that was recreated in Who Was Harry Cowley? (1984).

The Brighton-based Cowley Club, named after Harry Cowley was opened in 2003 - it is a members-run co-operative, café and bookshop which is devoted to grass-roots, non-affiliated, anti-caplitalism activism.
http://cowleyclub.org.uk/

This archived BBC website encompasses, "a growing archive of wartime memories" and includes some of Harry Cowley's memories.
http://www.bbc.co.uk/history/ww2peopleswar/stories/17/a4212217.shtml