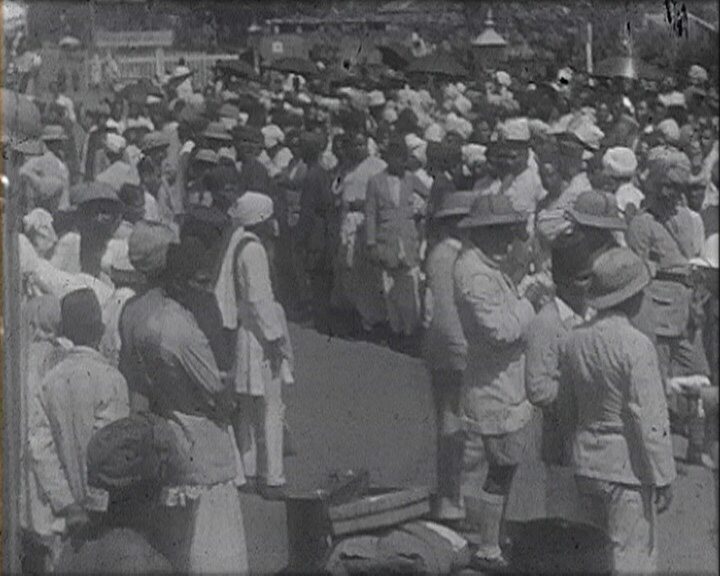 A few European men wearing pith hats stand apart from the large crowd of Indian Sikhs on the station platform at Calcutta (?). Passengers board the train - the cameraman films those left behind as it departs. Local men empty baskets of coal into the locomotive's tender. The passengers are now in Bombay (Mumbai) aboard the docked ocean liner MN Victoria - the camera films the people on the harbourside below. Once underway, passengers test their hand-eye coordination in various deck games, lounge on the deckchairs in the covered walkways and use exercise bikes in the ship's gym. Elsewhere sailors polish the railings whilst the swimming pool and lifeboats stand idle. Peddlers at Aden attempt to sell their wares from rowboats which encircle the ship. MN Victoria continues on her journey - she traverses the Suez Canal, joining other vessels such as the Japanese liner Haruna Maru on the busy waterway. Shots of the harbour at Port Said follow - buildings on the harbourside include the cable office of the Eastern Telegraph Company. MN Victoria has docked at Port Said - she flies the flag of the Kingdom of Italy, attracts peddlers in rowboats and sits within sight of a naval frigate (?). The film ends with images of holidaymakers touring the ruins at Pompeii - Mount Vesuvius is seen smoking in the distance.

Screen Archive South East does not have any information about Cyril S. Woolley, the maker of 'Travel'. Memories of a Journey from India to England (1930s) - the films were bought at a market and later deposited at the Archive by artist and film collector Tim Didymus.

Holidaying in the Orient became increasingly popular and accessible in the pre-Second World War years. Shipping companies such as The Peninsula and Oriental Steam Navigation Company (P&O) provided cruises to Asia for predominantly upper-middle class and upper-class clientele. The tourists in 'Travel'. Memories of a Journey from India to England (1930s) cruised aboard the motor ship MN Victoria, one of the premier vessels in Lloyd Triestino's fleet. The Italian ship was launched in 1931 and was noted for both her luxury - she was one of the first ships to have air conditioning - and her speed - at 23 knots she was the fastest motor ship in the world. In the 1930s she traversed the Europe to Asia route, stopping at Geneva, Naples, Port Said, Aden and Bombay (Mumbai). During the Second World War she was commandeered as a troop ship - her voyages ended in 1942 when she was sunk by torpedo en route to North Africa.

Screen Archive South East holds numerous other amateur films which record cruising holidays during the late 1920s and 1930s. These include voyages aboard the Queen Mary in [Voyage to America] (1937) and American Visit (1938). One family travels to Africa aboard the Cap Arcona in [Christmas Cruise - Trip to Africa] (1935?) - another family enjoys a winter holiday around the Mediterranean in [A Winter Cruise; SS Avoceta] (1929). Egypt is one of the destinations visited in [Boat Trip Along the Suez Canal: Port Said to Aden] (October 1929). Holidaymakers visit South America in [South America Cruise. Part 2: On Board and On Land] (ca. 1935).

Graphic Design from the 1920s and 1930s in Travel Ephemera

This website contains images of travel ephemera from the 1920s and 1930s, including travel brochures for the Lloyd Triestino Shipping Company.
http://www.travelbrochuregraphics.com/

The website for the Lloyd Triestino Shipping Company which includes a brief company history.
http://www.lloydtriestino.it/

This website contains extensive historical information on the shipping lists and passenger liners from shipping companies from across the globe, including Lloyd Triestino.
http://www.timetableimages.com/maritime/