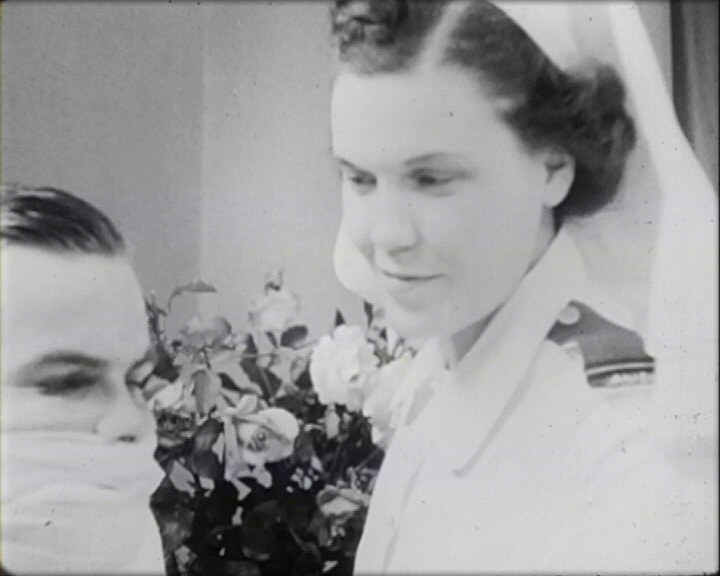 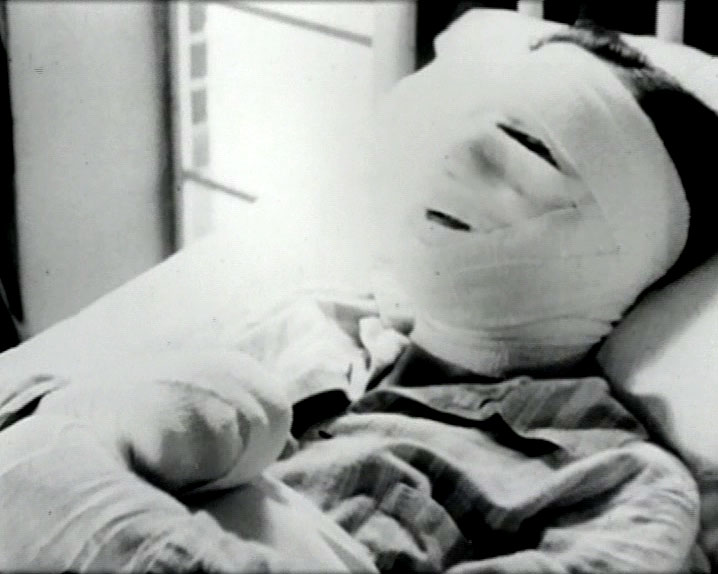 A welfare officer recounts the story of Jim, a member of the Canadian armed forces who arrived in England in 1941. Shots of aircraft fitters at work are followed by aerial images of nighttime bombing raids. A plane bursts into flames after a crash landing. A heavily bandaged Jim is taken by trolley from his hospital room to the operating theatre - the camera films from his point-of-view. Images of gossiping women, private signs and closed gates reflect upon a town unwilling to interact with the disfigured servicemen - the welfare officer enlists the help of an elderly local woman. Jim joins his peers on the general ward - the patients enjoy a group sing-a-long. Shots of medical procedures follow - reconstructive facial surgery and dental work, bandaging, a saline bath and physiotherapy help the men recover from their injuries. The villagers offer their support - they read and write letters, play cards with the patients and attend a large garden party. Jim grows in confidence and takes a part-time job at an aircraft factory - his confidence is knocked however when a girl refuses to dance with him at the factory dance. Shots of the disfigured patients at a piano recital reveal badly burned hands and faces - some have pedicle grafts. Jim studies his face in a mirror after his bandages are removed. In 1945 the multinational members of the Guinea Pig Club enjoy their annual club dinner. After 3 years at the hospital, Jim leaves for home, joining thousands of other returning servicemen aboard ships. 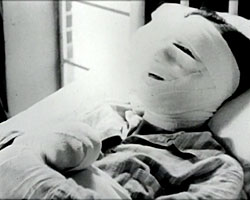 The National Film Board of Canada was founded in 1939 to, "make and distribute films designed to help Canadians in all parts of Canada to understand the ways of living and the problems of Canadians in other parts." New Faces Come Back (1946) serves this mission statement in a number of ways. The film acknowledges the work of Canadian servicemen and medical staff during the Second World War - it places them as part of a Commonwealth family working together to achieve military and medical advances. It also acknowledges the unprecedented sacrifices that they made. The film was made at a time when disabled and disfigured servicemen were returning home en masse to countries which had remained untouched by the physicalities of war, from the bombings and the resultant casualties. The layman was therefore somewhat inexperienced in the realities of wartime injuries - the popular press would not have carried images of the wounded. New Faces Come Back (1946) works to educate the viewer in the physical and emotional aspects of these injuries. By narrating the story of 'Jim', the film humanizes the injured airmen, encouraging empathy for the individual. It also challenges the stigma attached to their physical scars by presenting them in a largely unsentimental and uncensored fashion. The film therefore confronts disability and communicates the importance and value of social integration to the viewer - in accepting these servicemen the inhabitants of a Sussex village set a precedent for the world at large. As an educational film shot on 16mm New Faces Come Back (1946) had a non-theatrical exhibition - it would have been distributed to formal and informal educational institutions, clubs and societies. It is significant not only as a medical record but as a record of a politically sensitive post-war issue and proves to be far removed from the pageantry, commemoration and jubilation which marked other official records of the war years and the immediate post-war era. Screen Archive South East houses several examples of this - images of parades and ceremonies honouring (able-bodied) servicemen and women are seen in Sevenoaks Scrapbook (1937 - 1945) and the post-war film Civilians in Uniform (ca. 1946) pays homage to the dedicated work of the Civil Defence Services during the Second World War.

In 1939 the plastic surgeon Archibald McIndoe set up the Burns Unit at the Queen Elizabeth Cottage Hospital in East Grinstead. It was one of four units established on the outskirts of London in anticipation of high aerial warfare casualty rates. Survival rates for pre-Second World War burns victims were low, but men such as McIndoe and his Canadian associate Dr Ross Tilley introduced pioneering techniques which led the way in modern reconstructive surgery. One such technique was the use of saline baths (as seen in the film) which prepared the skin for grafts. The Unit grew quickly, servicing the needs of fighter pilots and bomber crews - nearly 650 men were treated during the War. McIndoe recognized that in additional to physical disabilities, emotional scars could have a debilitating effect on the injured men. He therefore encouraged group camaraderie and interaction with the local community. The Guinea Pig Club developed out of this holistic approach. It was formed in 1941 and was named by the injured airmen who acknowldeged with humour that they were guinea pigs in experimental plastic surgeries. Although decreasing in numbers with the passing years, the Club's multinational membership continues to this day.

A documentary about the 'Guinea Pig Club' was made in 2002 and another in 2005 to commemorate this pioneering unit. See below for details.

This extensive account of the Guinea Pig Club centres around the memories of its members. Copies are held at various libraries in East and West Sussex.

This well-researched book looks at the history of the Guinea Pig Club, specifically the work of Archibald McIndoe. Copies are held at various libraries in East and West Sussex.

"The collection comprises memorabilia and souvenirs of the town, its people, trades, professions and institutions...displays include artifacts relating to the town during the Second World War, with items associated with the Guinea Pig Club - the wounded servicemen treated for burns at the Queen Victoria Hospital. The museum also holds a collection of over 5000 photographs."
http://www.eastgrinsteadmuseum.org.uk/

The National Archives at Kew houses a number of collections concerning plastic surgery during the Second World War, including reports, surveys and publications. The National Archives' database is searchable online.
http://www.nationalarchives.gov.uk/

"One of the world's greatest collections of books, manuscripts, pictures and films around the meaning and history of medicine, from the earliest times to the present day." The catalogue of the Wellcome Trust Library is searchable online.
http://wellcomelibrary.org/

This Samuel Goldwyn feature film relates the story of three American Second World War veterans who returned home with both physical and emotional scars. The film featured real-life amputee Harold Russell, himself a victim of a wartime accident.

This Pathé newsreel looks at Amateur Athletic Association Championships and the Guinea Pig Club. The film can be accessed via the British Pathé website.
http://www.britishpathe.com/

This Rank feature film tells the true story of Second World War airman Douglas Bader who lost his legs in a 1931 flying accident.

This British Movietone film highlights the McIndoe Burns Unit at the Queen Victoria Hospital in East Grinstead. The film record can be found on The British Universities Film and Video Council's News On Screen database.
http://bufvc.ac.uk/newsonscreen

Guinea Pig Club - The Reconstruction of Burned Airmen in WWII* (2002?)

This documentary tells the story of the Guinea Pig Club and plastic surgery developments during the Second World War, with contributions from members of the exclusive club. A copy of the film is held at Screen Archive South East.

This archive page provides details on the BBC documentary featuring the Guinea Pig Club in East Grinstead and the developments in plastic surgery during the Second World War. The programme includes contributions from members of the exclusive club.
http://www.bbc.co.uk/pressoffice/pressreleases/stories/2004/02_february/03/bbcfour_mar.shtml

The National Film Board of Canada

This film is provided by kind permission of the The National Film Board of Canada. The NFB's database is searchable online and a summary, stills and video clip can be viewed on the site.
http://www.nfb.ca/

Screen Archive South East holds copies of several supporting documents relating to the filming of New Faces Come Back including a transcript, soundtrack and shooting script. All of the items are held on file at Screen Archive South East. All documents reproduced with kind permission of the National Film Board of Canada.
http://screenarchive.brighton.ac.uk/new-faces-come-back-documents/

An outline of the film's original sound track indicating the use of sound effects and music.
http://screenarchive.brighton.ac.uk/new-faces-come-back-documents/

The National Film Board of Canada's information sheet accompanying the film.
http://screenarchive.brighton.ac.uk/new-faces-come-back-documents/

A contemporary review from the publication 'Documentary News Letter' Vol.6 No.57 June-July 1947.
http://screenarchive.brighton.ac.uk/new-faces-come-back-documents/