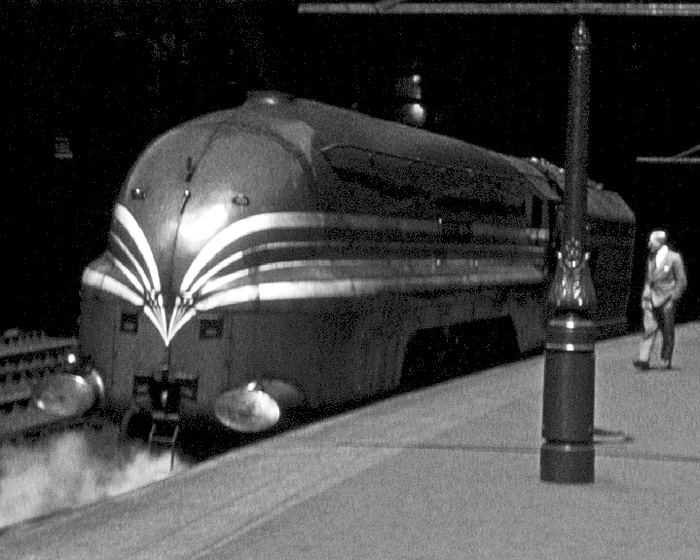 The first section shows a silent version of a British Movietone News clip covering King Edward VIII attending the Trooping of the Colour on 16 July 1936. Intertitles read: ‘The King. Memorable Day has grave but happily harmless sequel’ and ‘New colours for the Guards and an impressive speech by His Majesty...Then immediately afterwards a shocking revolver incident on Constitution Hill.... The whole Empire rejoices that no hurt was done to its devoted Sovereign King Edward VIII’. The footage shows the King on horseback at the event along with still images of the attempted assasination.

The next section was filmed by professional photographer Hubert Davies and shows the London Midland & Scottish railway's streamliner, 6223 'Princess Alice' as it backs onto the train at Euston Station before departing with the 1.30pm Coronation Scot. The train is shown travelling though countryside filmed from the carriage and from the rear of the train.

The film then shows a family on a campsite including a woman wearing an apron and young boys brushing shoes by a caravan. Scenes show the family at the seaside on a pebble beach, playing cricket on a grass field and various scenes of the children playing at the campsite.

Colour footage shows a boy in the garden with a wheelbarrow containing fire fighting equipment including a hose and ladder. A woman poses with two boys and a dog in the garden. A man wearing a leather driving helmet uses a wheelchair. A young man stands outside wearing an RAF uniform (?) and he poses with the family for a group portrait. The colour footage ends with images of a small fishing statue in a garden pond and flowers in the garden.

In black and white film there are scenes at the campsite including peeling vegetables outside the caravan and sunbathing. A bride comes out of a house in her wedding dress and she pets the dog. The film ends with shots of primroses in the garden, the pond statue and a woman wearing a hat and skirt suit in the garden.