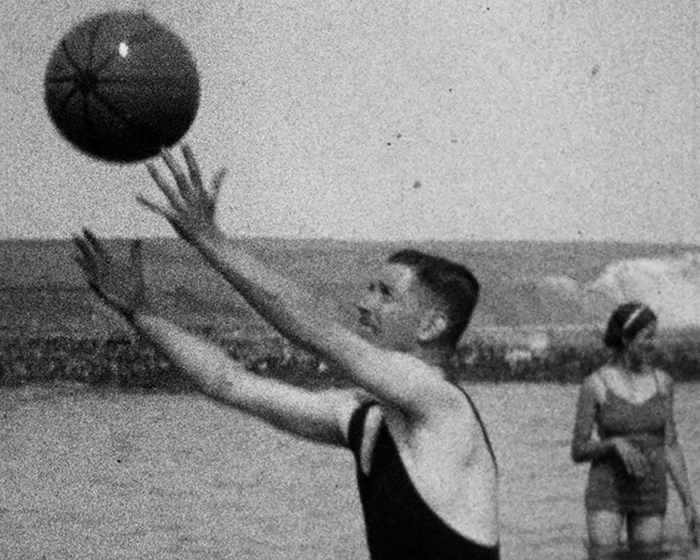 'Phantom ride' footage, shot from the window of a moving train, opens the film. The train is heading towards Portsmouth, where the film-maker, Kenneth, and his wife Constance, will take the ferry to the Isle of Wight. Footage shot from the deck of the boat and beach scenes at Sandown with friends follow. Three women make cups of tea for themselves and their partners. A pier stretches out into the sea, seen from an elevated position. The group play catch with a large beach ball in the sea, wearing bathing costumes. Waves wash up to the shore. The women play catch outside a their holiday chalet, jump into the breakers on the beach, and kayak in the sea. Boat trip scenes follow. Constance is seen with two men rowing the boat through the water. The group make a trip to an abbey and castle. They are seen walking through the ruins from an elevated position and walking through the complex before taking tea at tables and chairs by a canon. They play doubles tennis on a court in tennis whites, and golf on a course, before tucking in to ice cream cones. They jump together in the breakers and play leapfrog on the beach. The return journey is shown in footage shot from the ferry, of paddle steamers and boats in a harbour, and railway station scenes.

A group of young men and women take tea in the garden. A river during a flood is shown in the rain. Motorcycle racing scenes, filmed at Crystal Palace in South London follow. The bikes are shown from a series of fixed view points, over the heads of other spectators. Vintage cars also participate in races. One spins off into the verge as it turns a sharp bend. Kenneth's parents, Agnes and Sidney, are seen playing golf in their garden at Shirley, near Croydon in Surrey. Further tennis scenes follow. Women in tennis whites are watched by a group of spectators at the side of the court. Men play doubles, seen from an elevated position. A woman feeds the ducks and walks the dogs in the garden in the snow. The garden, covered in a blanket of snow, is seen in a series of views. Family and friends have a snowball fight in the garden.