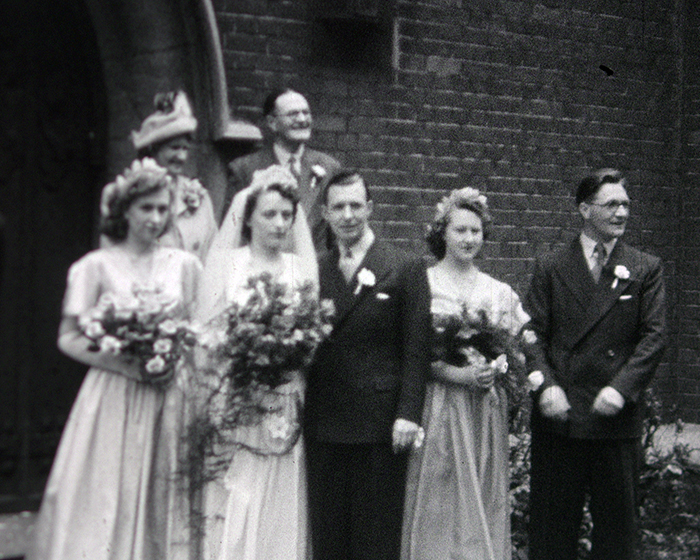 A couple link arms outside a church. The bride wears a long white wedding dress, veil and headpiece, and holds a bouquet of roses. Bridesmaids stand behind, wearing long dresses and headpieces, also holding flowers. The group stands in front of the brick-built church for photographs, their parents stand behind. Confetti fills the air, thrown by the guests at the newly wedded couple.

Views from a boat follow. The coast disappears as the boat leaves its wake behind in the water. A flag flies from the deck. Passengers sit on the deck of the ferry, and walk along the deck. Two women paddle in the sea, their summer dresses held above their knees. Family members take their turn to swing a golf club on a course in quick succession. The family walks along the promenade, a couple swims in the sea wearing costumes and caps. The pair walk towards the camera from stone ruins in suit and dress, and steer a motorboat in the sea. The Empress Queen, a steam ship, is seen from the distance as it moves towards the camera. Its lifeboats, funnel, deck and passengers are all visible.

On holiday on the Isle of Wight [?], glinting water rushes up towards a rocky coastline. In coastline views, sandy beaches lie below the cliffs. A young woman walks up a hill, laughing as the camera films her. Eastbourne Pier [?] is seen, stretching into the sea. A woman plays golf, hitting the ball into the hole before it pops out again, seen in reverse. A man grins with white sweets in his teeth. A woman walks through the trees and runs down a path. A sign reading "Dunster" (a village near Minehead in Somerset) is shown. Village scenes follow, showing cars driving through, the high street and the village "Tea Shoppe".

In further wedding scenes, a couple stand outside a church. The bride wears a long white dress with a stiff underskirt. Confetti is once again thrown at the couple, the groom's black suit covered in white paper pieces. The crowd laugh in a flurry of confetti. The couple drive away, a "Just Married" sign and L-plate fixed to the back.

In colour footage, a brown dog is seen, looking at the camera. A woman holds the dog in a domestic garden. The front of the house, in mock-Tudor and red brick styles, is shown in a panning shot. Women recline in deck chairs and summer dresses. In black and white footage, a woman walks past flint-built houses on a village street. A man walks towards the camera, squinting at the sun. A woman is seen, knitting on the beach, wearing a white broad-brimmed hat. Two women leave a house with a baby. Footage shot from the front of a car closes the film. 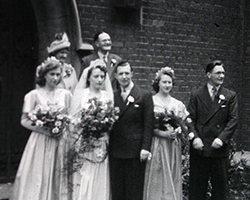