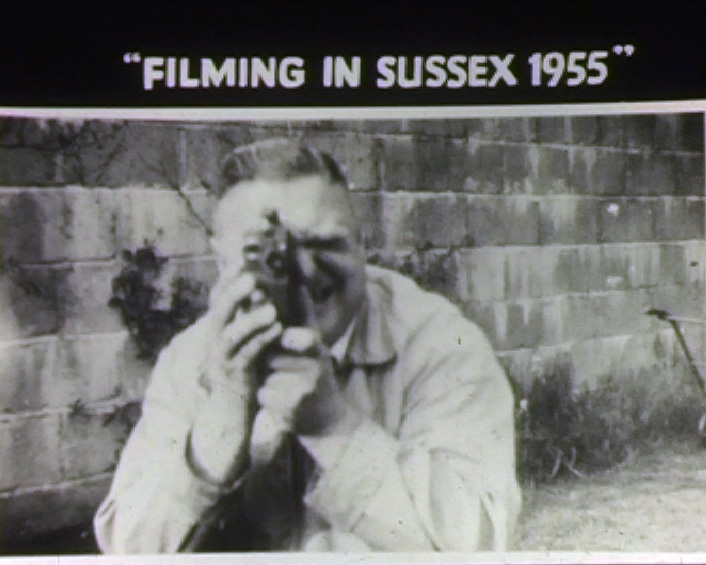 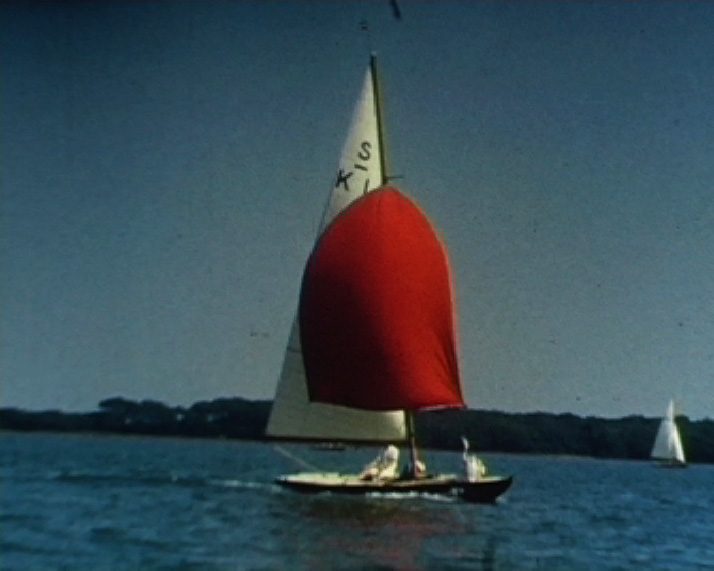 0:00:25:03 A house is under construction, the brick walls built and timber roof frame established. The trees along a country lane are deep orange, coloured for autumn. Apples are ready for picking.

0:01:07:22 Views of a church are taken from a sailing boat, passing along the river. A green Southdown bus passes along a road, Arundel Cathedral rises up behind. Arundel Castle is seen from a distance.

0:02:03:22 Sailing at Dell Quay [?]. A man speaks through a megaphone, amplifying his voice. A man with a clipboard encourages the group to clap for a young boy. All walk out to the sea. A beautiful sunset view, taken across the sea from a sailing boat, follows. Boats with white sails move through the water. Organisers administrate a race from desks set up on the beach. Participant sit on the beach together. Brief domestic views, of the family greenhouse and garden, pets and feeding the swans, are dispersed throughout. A boat with a bright red sail passes the camera. Ruins of Corfe castle, Dorset are seen from a distance. A steamship leaves the harbour and Jetty at Swanage Pier (?). Members of the sailing club lean out of small boats as they pass the camera. Close up of a church tower and a single funnel steam ship.

0:07:19:10 Gala Day in Chichester July 9th (IT). A marching band approaches the camera, the Chichester Cross in view behind. A woman is dressed in blue period costume, bonnet and parasol. She is a member of The Cornflower Blues, who pass by on a float decorated with streamers, watched by local residents. A float of nurses and doctors follows. A man plays the piano on another float, below a sign reading 'Thomas Weelkes'. A group of men, in 18th century period costume, white wigs and breeches, play out a scenario atop a further float. A fire engine and men in bright gold helmets pass by.

0:08:32:11 Rowing and sailing. A couple grins towards the camera as they row away, out into the water towards a mass of sailing boats. Boats, sailed by two or three people, cut through the water and bounce against the waves. A flint manor house is seen from its garden.

0:10:07:18 The White Starling (IT). A white bird feeds from the family's lawn with several dark brown birds. A rainbow arches over the water at the harbour. The family's black cat leaps from the mantelpiece, upon which a bouquet of bright blooms stands in a vase.

0:11:29:15 Helicopter Disaster Itchenor, May 23rd. Two Killed (IT). The body of the vehicle lies on its side by rows of sailing boats on the hard. Children climb up to the wrecked fuselage, while members of the club look on.

0:12:32:04 Brighton Gardens in May. Beachy Head. "Germania" on Rocks (IT). Cliff view towards Beachy head lighthouse, different shots showi the SS Germania in the water below the cliffs.

0:13:33:17 Toc "H" Banner Bearer for Chichester Festival April 23rd (IT). The bearer stands with an embroidered banner, which reads 'Chichester Toc H' and displays a crest. Brief scenes of the water rescue of two sailors and their upturned boat follow.

0:14:07:11 B's Wedding, April 30th (IT). A couple emerge from the church, where they are handed horse shoe tokens by a young girl in a white dress. The bride wears a long sleeved, full length white wedding dress and veil, and carried a bouquet of bright red flowers. Black and white footage follows. The couple are seen, standing with their bridesmaids and family members, covered in confetti, for photographs outside the church. The group smiles for the camera, and talk together when the photographs have been taken. The couple stand by their car, the bride now wearing a suit, smiling to the cine-camera. Final views of a bouquet of roses standing in a painted jar close the film. 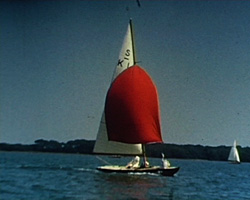