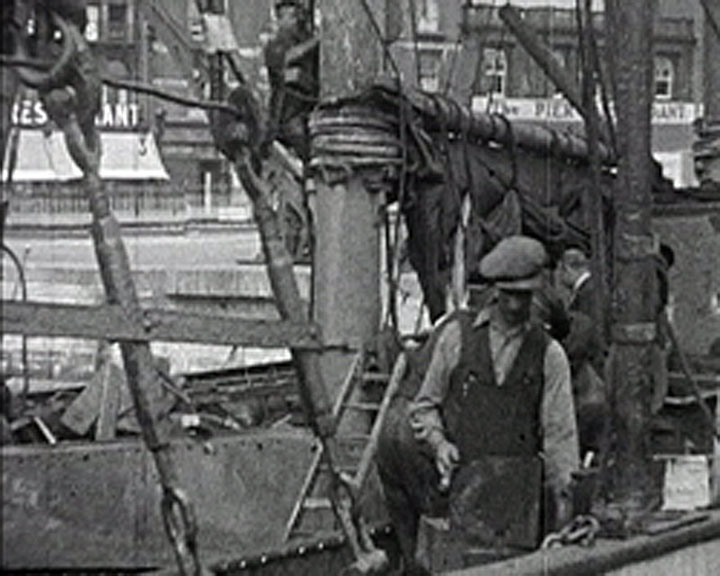 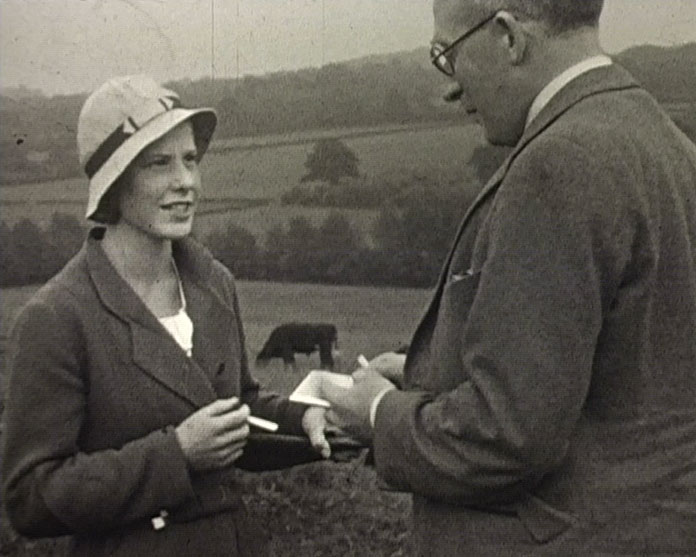 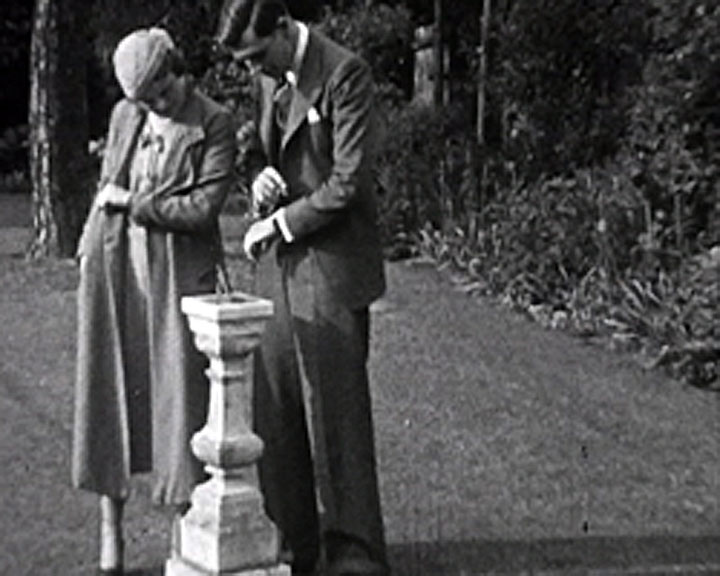 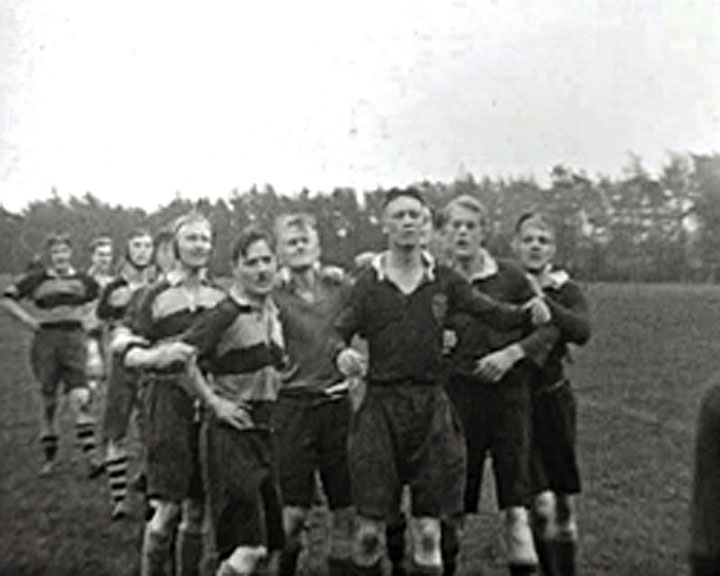 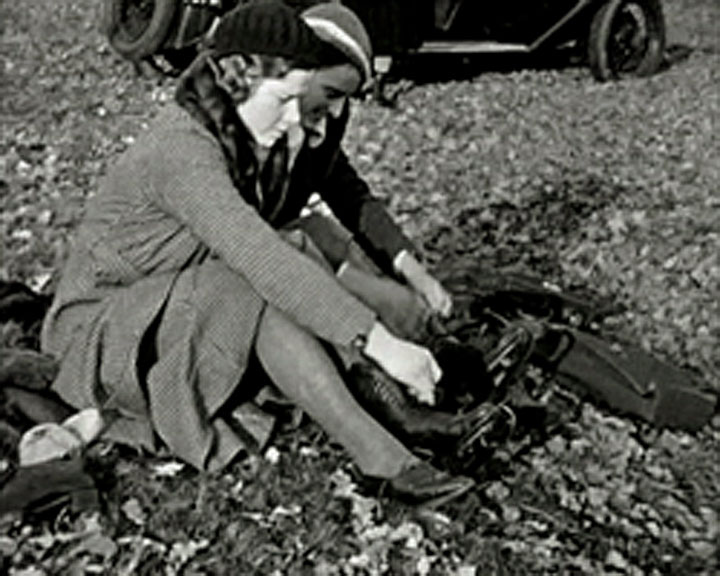 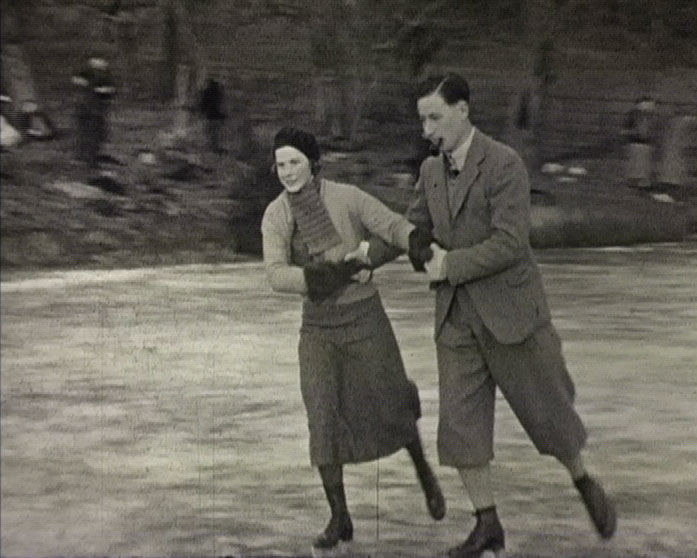 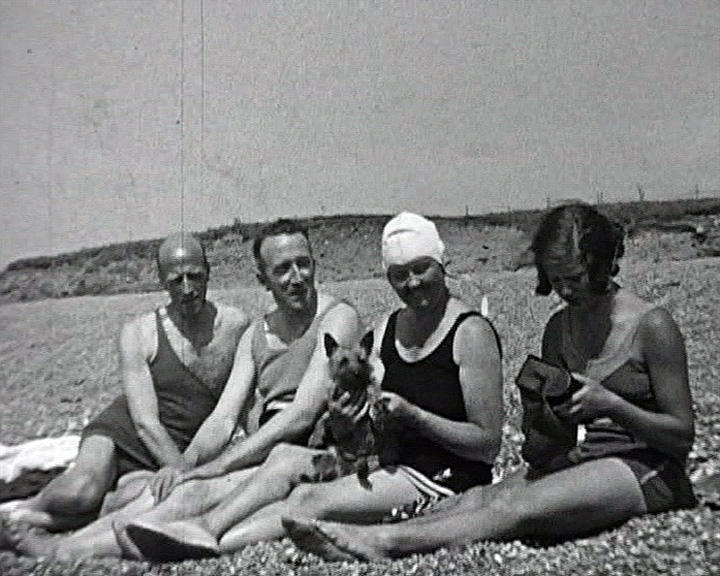 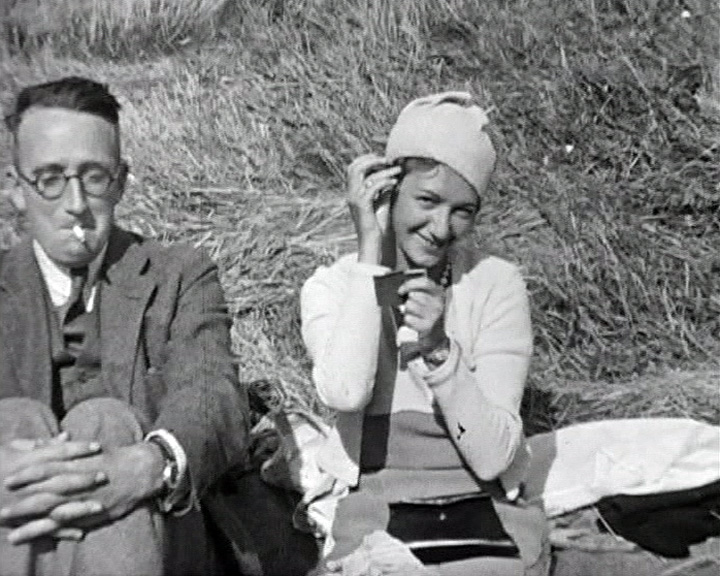 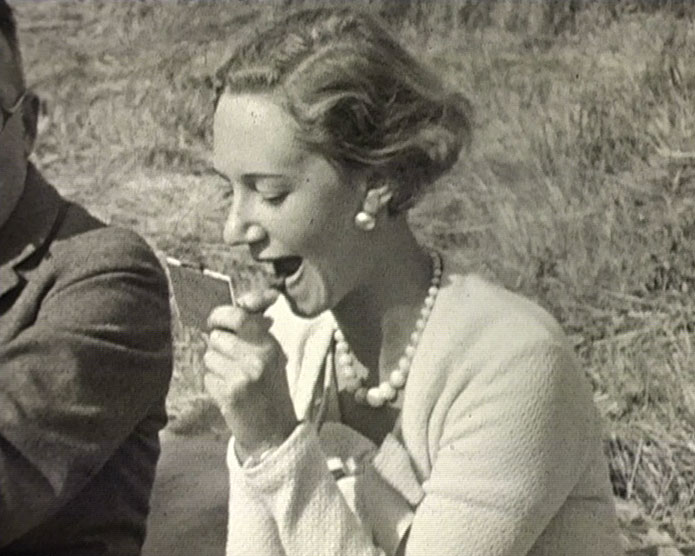 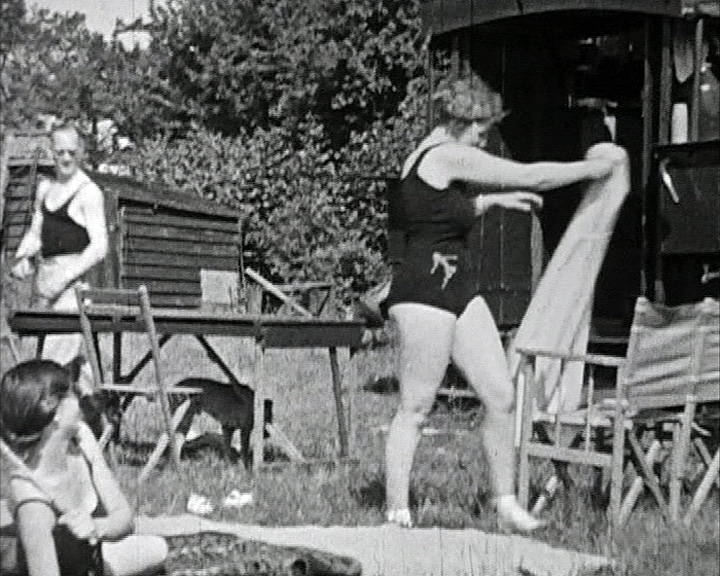 The film opens with the title “Member of the Institute of Incorporated Amateur Cinematographers Limited” followed by the film title “People and places”. The film includes scenes of men working at Ramsgate Harbour with the accompanying titles “Scraping the hull”, “The sweeper” and “Preparing for sea”. People feeding pigeons in Canterbury; people outside the Cathedral doors; people and traffic in the street at the West Gate in Canterbury and at Mercury Lane. The title “The Thames at Gravesend” introduces scenes of sail boats, tugs and steam ships on the River Thames. At “Coombe Bank swimming baths” near Sevenoaks, there are several scenes of friends diving into the pool, many shown in slow motion. The titles name the divers as “Jim Godwin”, “Betty Cole” and “Mary House”. The next title: “Near Eridge; Beryl Standen, John Kitchen and some cows”. introduces scenes of the couple getting out of a car. The couple look over a farm gate and the woman takes a cigarette from the man’s cigarette case. The title: “At Westfield. Mary House” is followed by a scene of a woman walking out of a house holding a newspaper. The title: “Ronald Humphrey and Joan Stanger”, introduces a couple standing comparing their watches to the time on a sundial. Scenes from a Rugby match follow the title: “Rugger Sevenoaks v Orpington”. Scenes of “Skating at Dunorlan Park, Tunbridge Wells” include skaters on the frozen lake and a woman tying up laces on her skates. Scenes follow of cars arriving at Brighton at the end of the London to Brighton Vintage car run; family and friends on the beach and swimming in the sea at Abbotsbury; a group sitting on grass at Angmering and a woman putting on make-up. The title “Whitsun holiday, camp at Little Hampden” introduces scenes at a camp site and women sitting in the sun near a gypsy style caravan; and images of farm yard animals: a goose, a dog and some cows. There are scenes of swimmers bathing in a reservoir, people walking along a street in “Chalfont St. Giles”, and the film ends with views of traffic on a street with Eton college in the background. 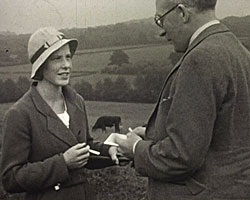 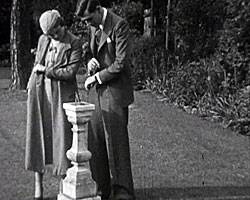 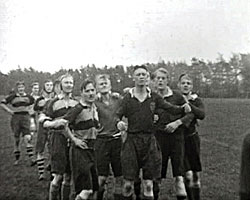 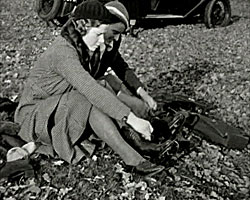 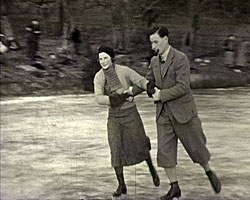 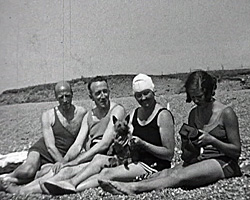 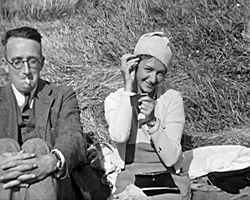 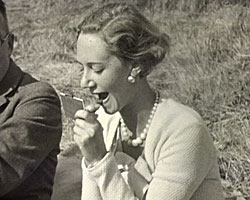 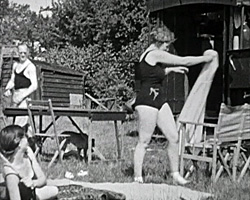 This film by Kent based solicitor, Lancelot House, shows a variety of scenes of family and friends in Sussex, Kent and other locations around the South of England. The film focuses strongly on House's friends at leisure, with the typical images of activities often seen in holiday films of this era such as swimming, ice skating and camping. However, these scenes are interspersed with seemingly casual, though probably somewhat directed, moments such as accepting a cigarette, putting on makeup and checking the time on a sundial. These moments assist in hinting at the participants affluent lifestyle and the film-maker's highly competent approach to the process of filming.

Other films by Lance House held in the Archive show subjects such as a friend's wedding [Cochrane Wedding] (1937) , a prep school sports day and days at the beach. Other comparable films held in the Archive's collection showing families and friends at leisure include: Joseph Emberton's Joce and Gill at Home [1936 - 1940] and [Ross Family Pictures III] [1930s]

Fashion Notes: This film shows men in work clothing, footage of rugby players in kit and people ice-skating on a lake in everyday winter clothing and accessories.

The Imperial War Museum holds also a small collection of Lance House's films. These include a film of a military event in Kent in 1934, his honeymoon in Austria and a motoring holiday through Belgium and Germany in 1936, and his son's National Service duty with the Royal East Kent Regiment based in Aden in 1958.
http://www.iwm.org.uk/collections-research