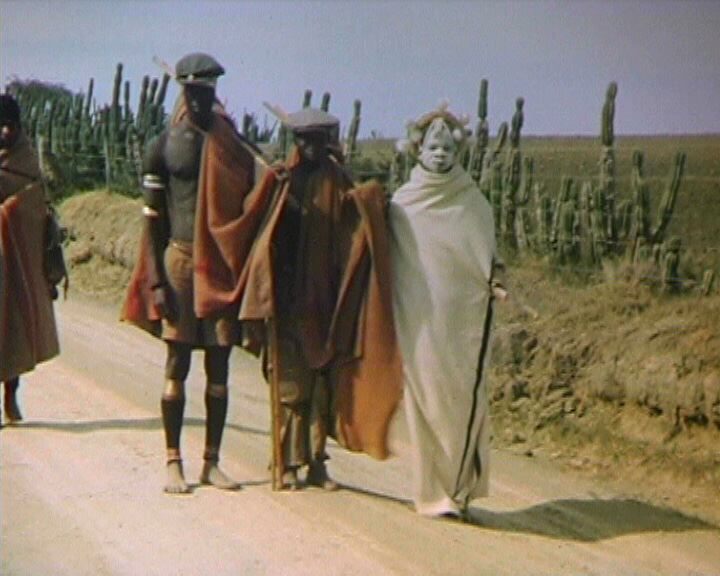 The cameraman films the visit of four adults to London (?) Zoo. A zoo keeper stands watch as one of the women handles a baby crocodile, occasionally aggravating it by tapping its snout.

The traditional buildings of pre-Second World War Nürnberg (Nuremberg) are filmed during a motor-holiday to Germany.

The footage which follows was filmed some years later, in the mid 1940s, beginning with a sequence of underexposed shots. The filmmaker has travelled to rural Africa where he films a ceremonial war dance (?) and a busy marketplace.

The camera and the Western tourists show a fascination with the African women - the film contains numerous images of bare-breasted women who are directed to pose for the camera. The people and mud huts of a rural village are also filmed - a white man gives money to a female inhabitant as payment for appearing in front of the camera. A parade of indigenous people traverse a rural road on foot - travellers include women carrying large bundles of wood on their heads, and a shaman (?) sporting a whitened face. The film also has a panning long shot of an industrialised town (?).

[Outing to a Zoo; Trip to Germany; African Village] (1947?) was made by Joseph Horowitz, an importer and exporter who lived in London. Screen Archive South East houses several other of his films which chronicle trips abroad during the 1930s (possibly as part of his work). These include [Stay in India] (ca. 1935), [Holiday to Denmark] (1937) and [Trip to New York] (ca. 1938). It is interesting to consider some of these films in terms of the 'Western Gaze', for they exhibit a fascination with otherness and the exotic. Horowitz's films are not the only films held at Screen Archive South East which demonstrate this - it can be found, for example, in films as geographically diverse as American Visit (1938) and [A Visit to Java, Bali and Sumatra, Angkor Wat and Bangkok] (1939)

This Pathé newsreel records the tour of South Africa by King George VI and his family in 1947. It is interesting to consider the images and presentation of this official newsreel in contrast to that of the amateur film [Outing to a Zoo; Trip to Germany; African Village] (1947?). This film can be accessed via the British Pathé Website.
http://www.britishpathe.com/

The School of Oriental and African Studies

The School of Oriental and African Studies at the University of London is, "the world's leading centre for the study of a highly diverse range of subjects concerned with Asia, Africa and the Middle East."
http://www.soas.ac.uk/