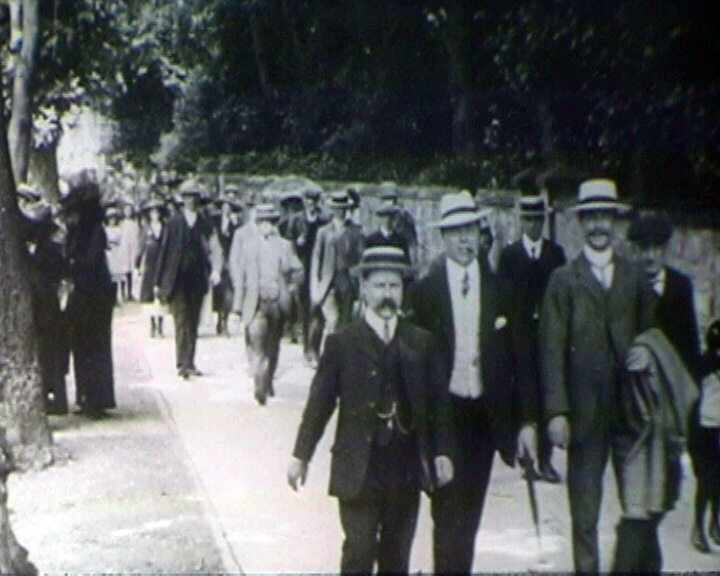 The smartly dressed inhabitants of Horsham and the surrounding area file past the camera along North Parade (or The Causeway?) - only one man heads in the opposite direction, acknowledging the camera as he passes by tipping his hat.

It is believed that the Pathé Actuality Film Horsham Cricket Week and Grand Carnival (1913) was specifically made for the Central Picture Hall, one of the three cinemas in Horsham during the 1910s (it was opened on North Street in 1910, accommodated 320 people and later became known as the Winter Garden Theatre). This belief is supported by the closing shot of Horsham Cricket Week and Grand Carnival (1913), namely an exterior shot of the Central Picture Hall itself - a device used both to promote the cinema and to give added value to the local audience. Furthermore, the lengthy opening shot of people walking along North Parade supports the idea that the film was made for a local audience - the filming of inhabitants was a common feature in contemporary non-fiction films that were attempting to attract local audiences into cinemas - cinemagoers were enticed by the prospect of seeing themselves on the 'big screen'.

The remainder of the film focuses on an annual event which attracted huge numbers of visitors from Horsham and the surrounding area. The Horsham and West Sussex Week was started in 1908 by the captain of Horsham Cricket Club, Mr A.C. Oddie - he initiated it as a week of county cricket matches, but from the start it also contained non-sporting attractions such as concerts, dances and garden parties. Horsham Cricket Week and Grand Carnival (1913) features the concluding fixture of the week when 3,000 spectators watched a match between Surrey and Lancashire on a pitch said to be in the finest setting in England. The week culminated with an evening carnival organized by the town's Carnival Society - it comprised a torchlight parade, a concert, a cavalry display and fireworks, some of which were captured in Horsham Cricket Week and Grand Carnival (1913). The annual Horsham and West Sussex Week finally ended in 1956 - Horsham Cricket Week and Grand Carnival (1913) therefore offers a fascinating record of the type of entertainment afforded an extended community in the years preceding the First World War.

Screen Archive South East holds a number of amateur films which record cricket in the South East during the 20th century. These include [Manor House Cricket Matches] (ca. 1931), [Pre-War Events In and Around Canterbury] (1990s) which contains footage of the 1935 Canterbury Cricket Week and [Cricket in Sussex] (1963) which has footage of a Sussex vs West Indies match at Hove cricket ground and of women playing the game. Screen Archive South East also houses an amateur film called [Cricket Scenes. Don Bradman?] (1949) which shows the Australian cricketer Don Bradman at a match.

The town of Horsham has been captured by many cameraman over the years and Screen Archive South East holds a variety of these films. Amongst these are [Sussex and Hampshire Scenes] (1930s) which has some lovely images of the notable buildings and shopping streets, [Traffic in Carfax and Horsham] (1960 - 1961) which records various street scenes and Horsham Magazine (1934 - 1975) which details the changing face of the town over four decades.

Copies of this book, which details the history of Horsham through photographs, are available at various West Sussex libraries.

Copies of this book, which details the history of Horsham through photographs, are available at various West Sussex libraries.

Copies of this book, which uses photographs to chart the changes in Horsham during the 20th century, are available at various West Sussex libraries.

Editions of the Sussex Daily News dating 14th - 26th July 1913 contain articles on the Horsham Cricket Week and Carnival. The newspaper is available to view on microfilm from the Brighton History Centre collections at The Keep.

This is the website for British History Online, It includes material from Victoria History of the County of Sussex Volume VI Part II has a detailed history of Horsham. Copies of the books are available at various East and West Sussex libraries.
http://www.british-history.ac.uk/

This website has a database of scorecards, matches, players, grounds, leagues and tournaments dating from 1744. Cricket Archive contains the scorecard for the County Cricket match featured in Horsham Cricket Week and Grand Carnival (1913).
http://www.cricketarchive.com/

West Sussex Past Pictures is, "the official database of heritage photographs, prints, drawings and paintings provided by local museums and the County Library Service. Over 5000 images from the 1640s to the present can be viewed, downloaded and printed for educational or private use free of charge." The website includes a varied collection of archive images of Horsham.
http://www.westsussexpast.org/pictures/