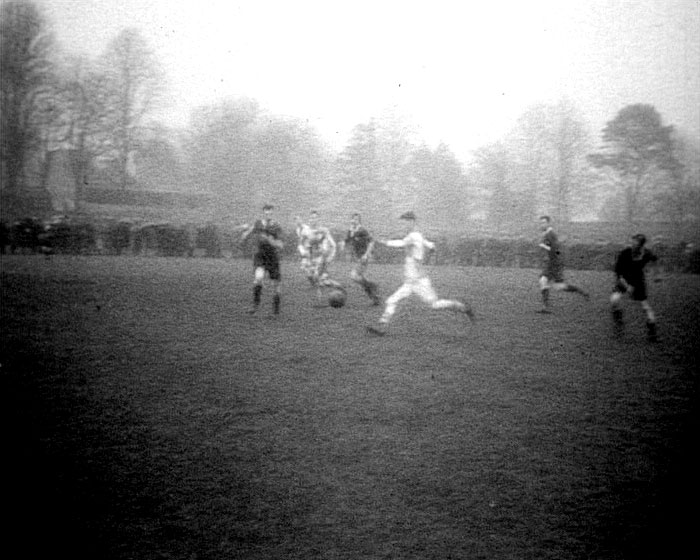 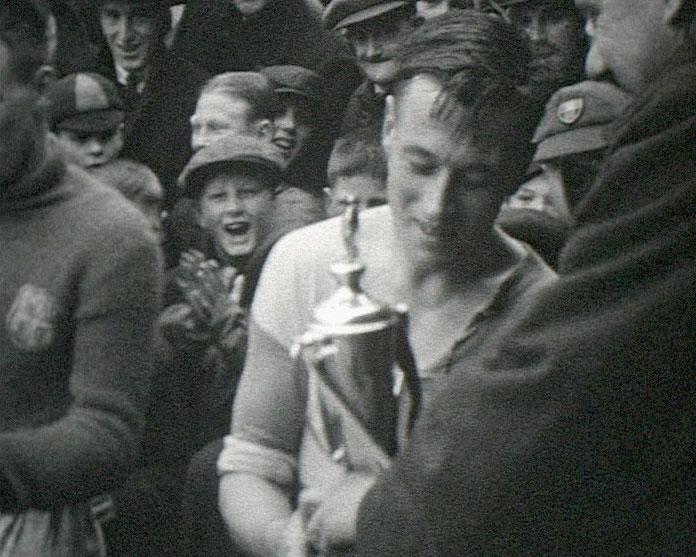 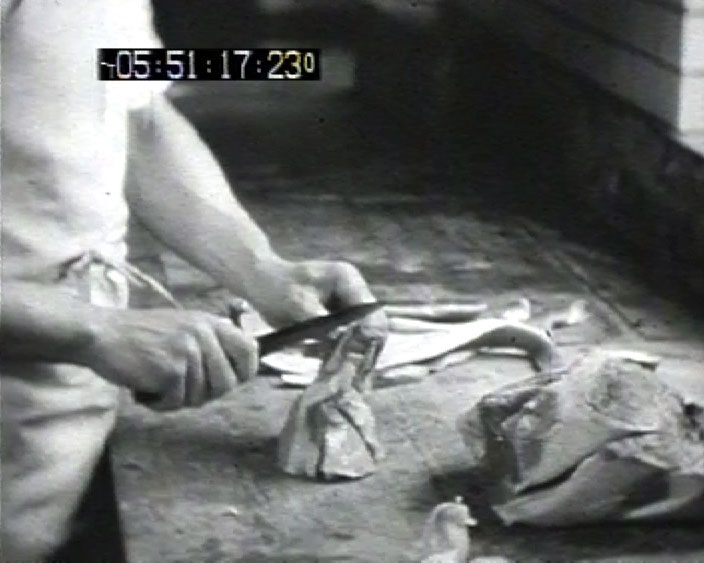 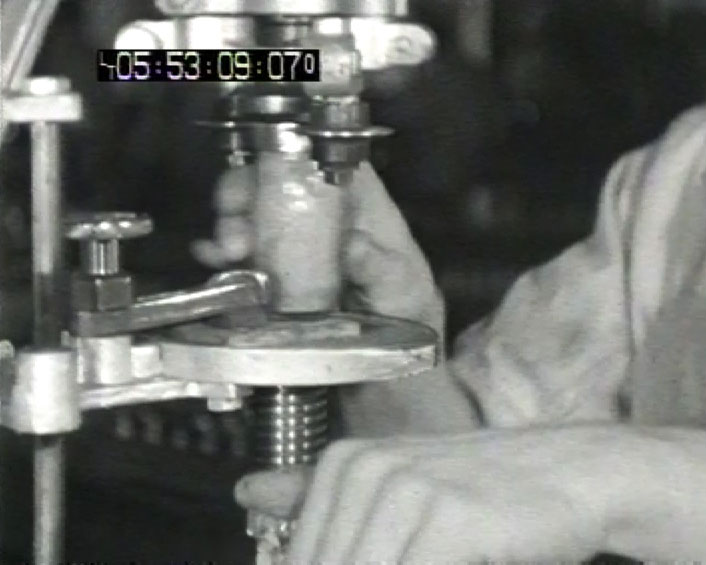 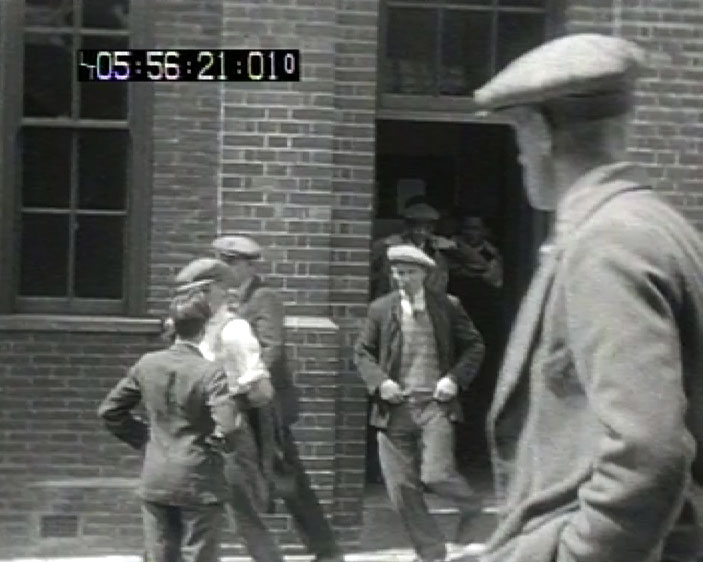 Fishing scenes, filmed at a harbour, open the hour long compilation. Nets and baskets have been loaded onto the boats. Fishermen, in woolen jumpers and caps, smoke on board a boat as it moves out of the harbour, seen in footage taken on deck. Others haul baskets of fish onto the hard, and sort nets after a day's fishing. Gulls wait and watch, or circle the boats above.

At the Shippam factory in Chichester, men in white coats and caps operate machinery, filling small glass jars with Shippam's Paste. The men work at long benches, seen in panning footage. Some bring large metal bowls of the paste to the bench, loading large vats with the mixture. Others expertly and quickly fill the jars and fix the lids before placing them on large metal trays. The footage is slowed down, making the quick movements decipherable. The first worker turns a handle and, holding the jar with his spare hand over the nozzle, fills the glass jars with paste. The next worker picks up the jar, clips a lid on top and tightens with his hand and a cloth. Close up footage of the first man, filling the jars, shows his hand deftly moving slightly to fill the jar completely.

In further factory scenes, a man stands at a large machine, pulling lever down to operate it. An arm places a label on the jar, and two more smooth the paper onto the glass. Outside the building, men in caps and coats arrive and enter through the factory door. Inside, boxes and trays are piled up. A Lewis & Co. Removers van waits outside. Men are seen leaving work, slipping on their coats as they leave. Domestic scenes follow. A man sees a woman to a motorcar outside a grand house. Their chauffeur drives the woman away, as she waves to the camera. Panning footage of a flowerless garden, and expansive pristine lawn, follow. A man sits astride a motorcycle, talking to the camera.

In further factory scenes, wooden crates are passed along a conveyer belt, made up of rollers, to a storeroom. Another is used to load boxes onto a truck. A man plucks chickens on his lap, in a room where others are hung up behind in wait. A worker empties trays of meat into a large mixer with a hook attachment. Further footage of jar filling, slowed down, follows. One of the workers places metal lids on the filled glass jars, reading for tightening. Sterilised jars are taken out and placed in a box. Outside, plucked chickens hang from a metal frame. Workers bring the birds off a truck before hanging them on the movable rails. Inside, the chickens hang limply from the frame. The paste is retrieved from the mixer for further processing. A worker pushes the mixture through a mincer, into a shallow metal bowl. A butcher deftly slices fat from a leg of pork. Another worker sorts plucked chickens into bowls.

A suited man sits at his desk, a telephone to his ear. Workers in the factory continue to screw metal lids onto the glass jars of Shippam's paste. Others use a hand-operated machine to screw the lids onto the jars. Their actions are shown in real time and slow motion. The street outside the factory is seen from the building's roof. Motorcars pass along the road, where others are parked. Smoke is emitted from a factory chimney. Workers bring in trolleys of crates. These are loaded onto a pallet, and fixed in place by metal rulers. The pallet are pushed into the steamer to cook. The door, once closed, is tightened with a spanner. Notes are taken in a log book at the window, left open to let the steam escape.

Further chickens are delivered and hung. Office workers and clerks, also men, are seen at their desks, grinning at the camera and hard at work, oblivious to the film-maker. One looks up at the camera and winks. Workers, in smart suits or shirts and braces, leave the factory, pulling on their jackets and coats. Further panning footage of jar fillers at work follows. The steaming contents of large metal vats are stirred with a wooden paddle in another room. In the filling room, excess paste is pushed off an into a metal bowl, the jars of paste now ready for lids. A Multiwheeler truck is loaded with crates and covered with tarpaulin before it leaves the factory. Factory workers walk over a mat reading 'C. Shippam LTD'. Boxes and crates move down a spiral conveyer in artfully shot footage. The door to the steamer is opened, and the crates of jars is brought out and unloaded. The filling room is seen from above, the men hard at work filling the vats and jars.

Young men play a football match on a waterlogged pitch at Priory Park in Chichester. Their white shorts are darkened with mud. A crowd of spectators watch from the sideline, holding umbrellas in the rain. The match is filmed from a number of of positions. Spectators gather around the players when the match has ended. A man with glasses announces the winning team and awards the cup.

At a second football match, held on the same pitch as the first. Footage is taken from beside the goal, and other positions on the sideline. The linesman passes in front of the camera, and the men walk off at half time. The match starts again, and men watch from a stand, smiling and laughing. Spectators gather on the pitch when the match has finished. The players from both teams walk through the crowd in single file. A man announces the winning team and awards the cup. The players shake hands.

Three further football matches are recorded, one at a pitch by a glass greenhouse. At another, the players stand together in a line at the goal before the match commences, all wearing different football socks. The referee tosses a coin and the match starts. 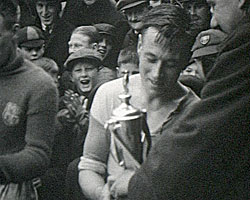 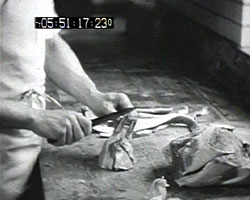 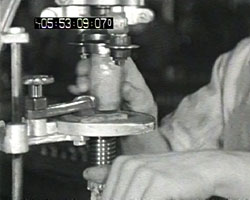 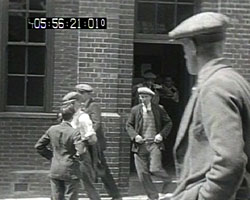