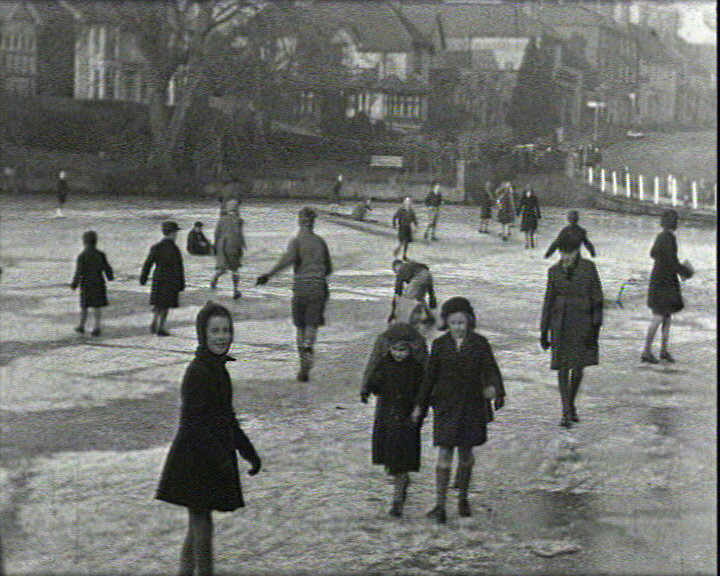 The opening scenes show the village in the late 1980s: the pond, houses, a church. General views show quiet streets, people walking and jogging. The film cuts to the 1940s: a military band and servicewomen march along the village street. A group of family and friends, some in military uniforms, pose outside their house. A dog and cat play in a back garden. The young service men and women walk away down the street and wave, suitcases in hands they say their goodbyes. Women and children relax and drink tea in a garden. A man takes tools from a garden shed and trims a hedge. A shot of names on a memorial and a view of the pond (1980s) is followed by people playing and skating on the frozen pond (1940s). A boy walks his dog on the ice. There are views of a snow-covered house and church. A group of people walk around an allotment. The film cuts back to the frozen pond; people skating and playing. A close-up of a wall plaque commemorates the village tollgate and a view of the street shows where it once stood. Colourful views of the village’s buildings and gardens in bloom (1980s). Men and women in a back garden, a cat sunbathes, women serve tea to a woman and young boy in the garden (1950s). The remainder of the film focuses on a number of houses and gardens around the village. The scenes show children playing, pets and people walking through gardens in full bloom.

“The Village Archive Collection, established in 1996, is maintained by Lindfield Parish Council".
http://www.lindfieldparishcouncil.gov.uk/Core/LindfieldPC/Pages/Village_Archive_4.aspx

“An independent project that is exploring the history of the parish of Lindfield."
http://www.lindfieldhistory.org.uk/

Founded in 1961, The Lindfield Preservation Society promotes and encourages the preservation and development of the village of Lindfield. A copy of the compilation film Memories of Lindfield (which comprises of the films of Cyril Hayworth) is available via the Society.
http://www.lindfieldsociety.org.uk/