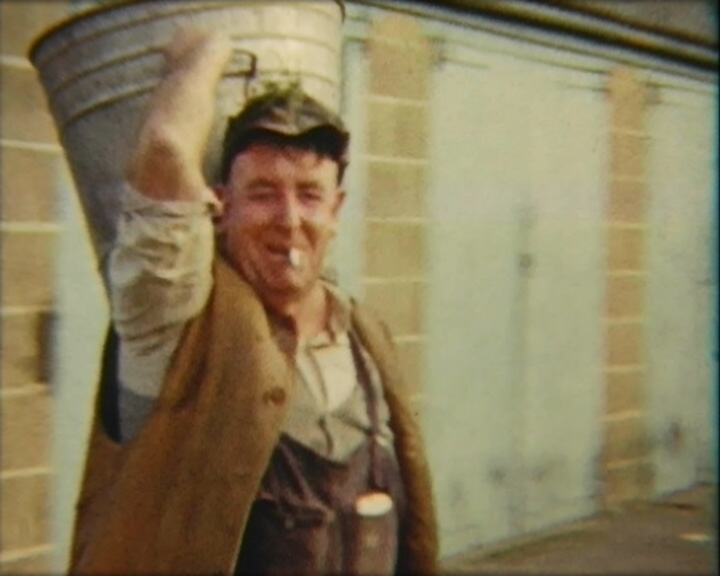 The film begins by showing different ways of arriving at Shoreham-by-Sea; by rail, on foot over the Downs and by car.

Scenes around the harbour show the Suter & Sons Yacht Depot and the old shipyard, and fishermen and locals at the harbour. In the village the Town Hall is shown, and inside, a meeting taking place; one of the councillors then waits for a train at the station. Back at the harbour timber is unloaded from a ship. Further views of the harbour show the lighthouse, custom house and the lifeboat being launched.

A Rotary Club lunch in the village and shots of St Nicholas’ Church follow. At the King’s Manor School for Girls pupils are shown in a number of different classes including music, textiles, fencing, gymnastics, drinking milk at break-time, playing sports and going home on the school bus or by bicycle.

Back in the village, prefab houses are shown. At the Fire Station a call is received and the brigade demonstrate the procedure for dealing with such a call. Interior scenes at Southlands Hospital include the x-ray department, an operating theatre and a baby in an incubator.

Football and tennis matches take place in Buckingham Park, as well as sheepdog trials and a funfair. Modern town developments such as roadworks on the Folkestone to Honiton Road, Old Shoreham and a new bungalow estate are contrasted with a traditional Morris and folk dance event.

Rural scenes show the Adur estuary and Lancing College and chapel, as well as examples of cattle and arable farming in contrast to the industrial Shoreham Cement Works and Shoreham Airport. Views of the Norfolk Bridge lead back to the harbour and the James Taylor & Son shipyard, the Sussex Yacht Club and leisure activities in harbour.

On the village streets dustmen empty bins into a wagon. Other activities around the village include the Junior Athletic Club, a Chrysanthemum Show at Shoreham Town Hall, scenes inside a youth club at the Wesley Church, the Council offices, Sea Rangers, and cadets in the classroom and on parade at the Air Training Corps.

Wreaths are laid at a Remembrance Day Service; in addition to the military parade, youth groups such as Boys Brigade and Girl Guides are also present. Views of St Mary de Haura Church (New Shoreham Church), both outside and in. The congregation and verger leave the church after a service. The tour concludes with a ‘high-speed’ car ride through the village streets, followed by a sunset over the countryside.

Made by Paul Plumb, the film takes an extensive look at life in this small West Sussex town. Paul Plumb was founder and chairman of the Shoreham Cine and Miniature Camera Club, and the film is a good example of the sort of film often produced by cine club members: looking at a subject close to home over an extended period of time then editing together (an often lengthy) compilation. As with this film, separate soundtracks were sometimes made, and the films were often screened to local audiences.

The Marlipins Museum at Shoreham-by-Sea has a collection which includes material relating to Shoreham’s history.
https://sussexpast.co.uk/properties-to-discover/marlipins-museum

The BFI National Library in London holds many ‘How To’ manuals and publications giving advice to the amateur film-maker and cine societies. The Library's book catalogue is searchable online.
http://www.bfi.org.uk/nationallibrary/index.html

The BFI in London houses a selection of films and periodicals relating to amateur film-making, including Amateur Cine World and Home Movies & Home Talkies. The magazines contain many references to cine clubs and societies nationwide.
http://www.bfi.org.uk/archive-collections/searching-access-collections

This website includes news, pictures and a short history of the lifeboat station.
http://www.shorehamlifeboat.co.uk/