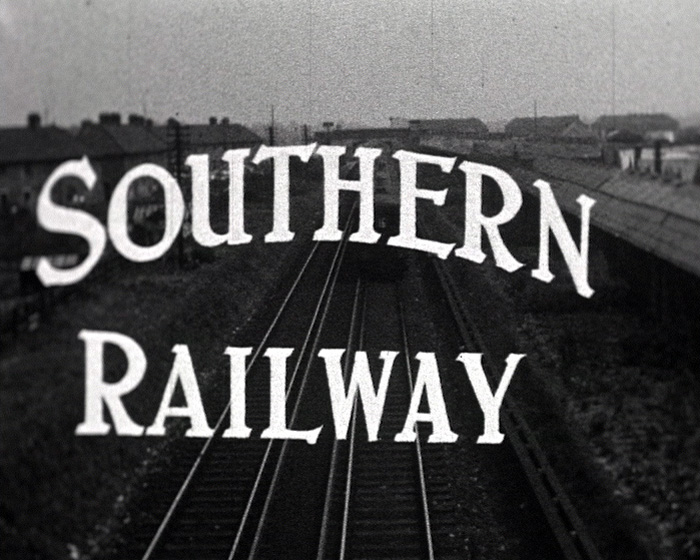 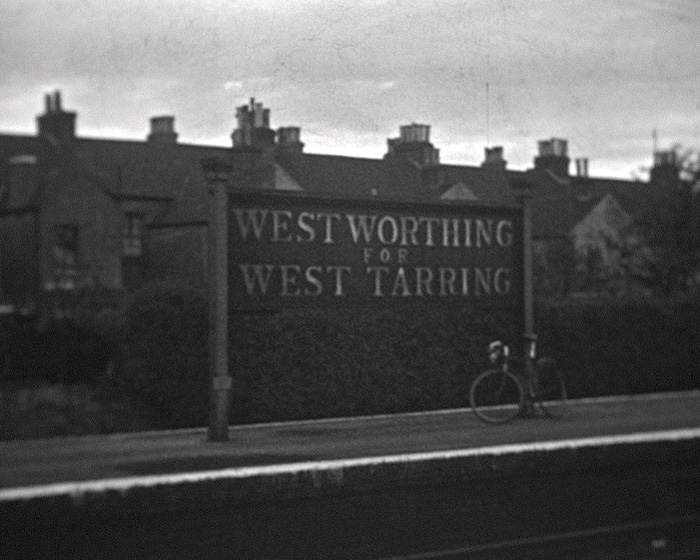 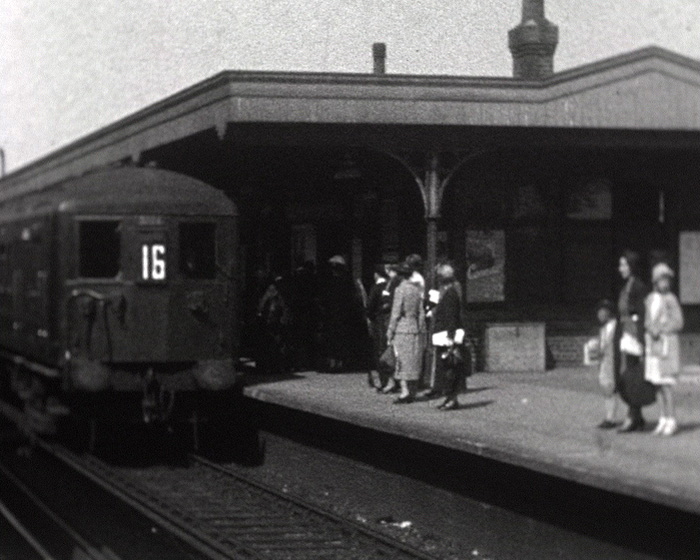 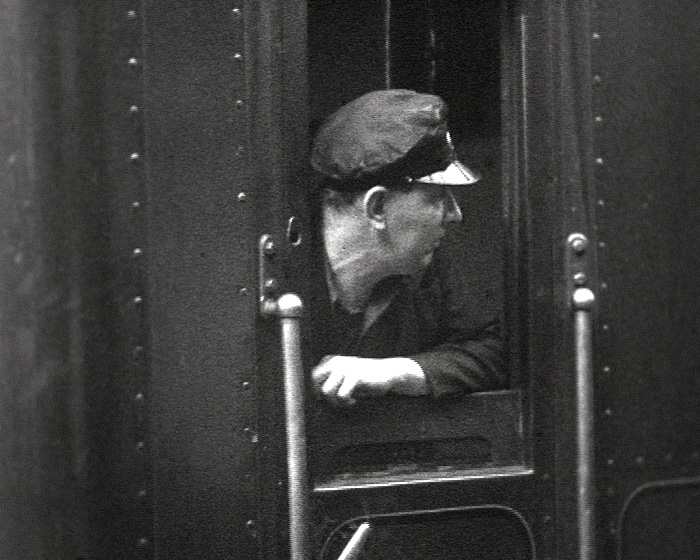 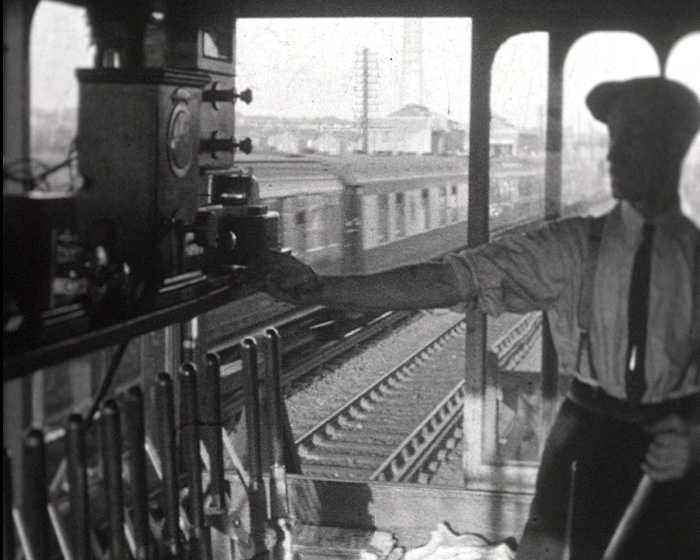 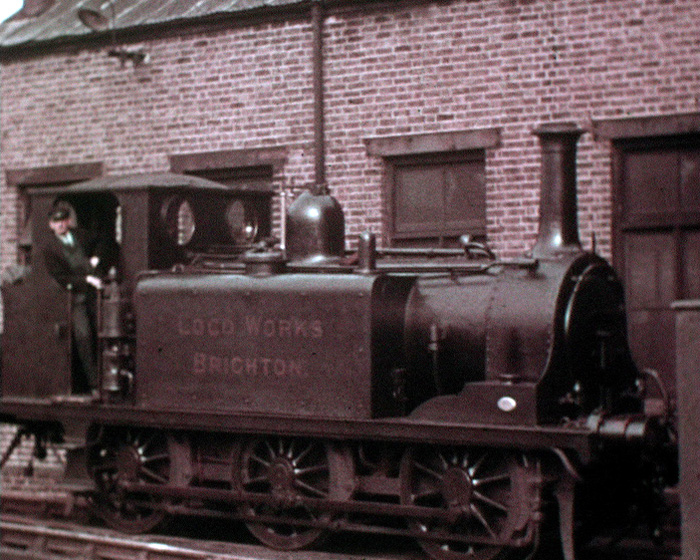 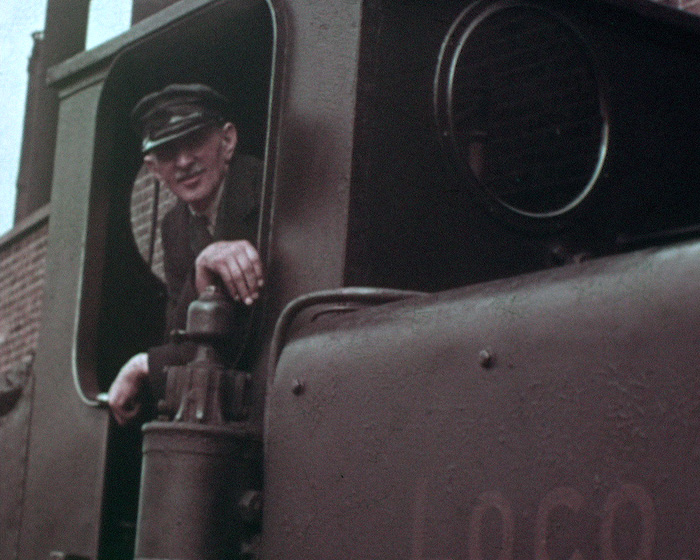 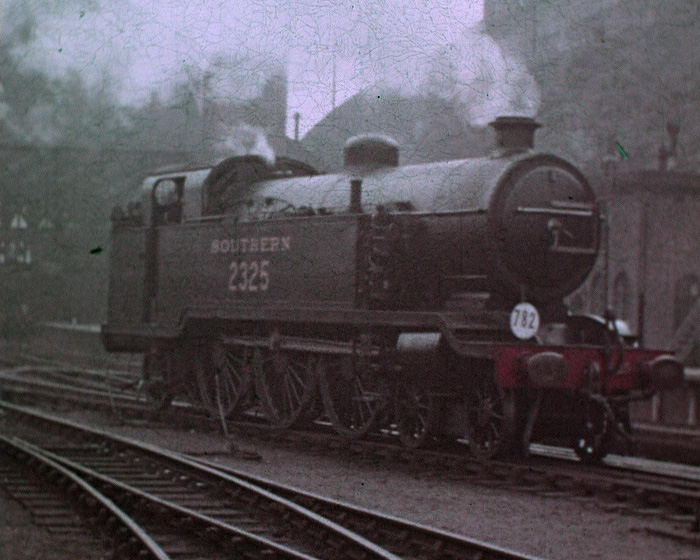 "Circumstances not permitting the inclusion of the heavier locomotives and long distance trains, it is hoped that this representative survey of the passenger and freight rolling stock and services will convey some measure of speedy, safe and sure travelling facilities offered by the Southern Railway Co." "It should be noted that this production is but a brief survey of the system extending from Brighton to Bognor Regis."

Steam trains from ground, elevated position, platforms. "With one third of its 2167 route miles electrified, the Southern operates the most extensive power system in the world." Footage of the track follows. "Power of 600 volts is obtained from a third rail." A station sign reads "Southern Electric: frequent service of trains to Brighton, Croydon, London and intermediate stations." A platform sign reads "West Worthing for West Tarring." An electric train reading "Victoria" pulls up to a platform (3004, 16). Porters load luggage onto the train. The station master pulls levers inside before the guard waves a flag to leave and jumps on the train. The train passes through a station in which another station master pulls a lever. The train is seen from a bridge as it passes underneath, from platforms and surrounding fields. Footage taken from the front of the train and inside the carriages follows.

"Until May 1938 West Worthing was a terminal point on the electrified section, here was stock housed and cleaned." Views of the 3037 entering a warehouse over the track follows. "Meeting London trains at West Worthing were motor trains from Bognor to serve intermediate stations." The 3849 reading "Bognor Regis" stands at the platform. A steam engine is seen briefly, as its driver walks along the track. The signal drops as the train moves off, with steam engine attached to the last carriage. "Dec. 10, 1937. This short road at West Worthing was closed and later removed." The 2237 steam engine pulls carriages into a station. A pump is linked to the train's engine. Footage is shot from the front of the train through a window, showing the driver's point of view.

Colour footage and intertitles in colour follow: "Of great luxury is the Brighton Belle, composed entirely of yellow and chocolate Pullmans." The train stands at Brighton station, there is no separate engine. The front of the train reads 3053 4. It pulls out of the station after the driver climbs into the front, passing along the side of a large brick-built building inset with arches. "Two return trips daily are made between Victoria & Brighton." "An old-timer looks on as the Belle speeds to the city." A driver leans out of a static engine that reads Loco Works Brighton. "50 years' progress!" reads an intertitle. Southern steam train No. 837 pulls into Brighton station. "The Southern rails welcome the North Country!" The Sunny South Express arrives at Brighton, its red carriages full of passengers.

Black and white footage follows. Scenes filmed at Brighton station follow. "The Sheds" are shown in a panning shot. A shed houses steam train engine 2342. A mechanic works on an engine. The Marlborough 922 is inspected by two men, as is the Southern 834. Views taken inside the train's engine follow. The Southern 2505 is shown as a crane lowers coal. The 2076 turns on a rotating platform and moves off along the rail. Coal is emptied onto the back of another engine. "From coaling to cleaning: The Washer." The Pullmans train is cleaned by jets of water as it moves through the washer. "The signal cabin" as Brighton is seen from the tracks. A man walks up wooden steps to the cabin. Men stand inside the vast room lined with levers and maps. "This 225 lever all-electric interlocking frame replaces seven "mechanical" signal cabins. Coloured lights indicate the trains' progress on this large scale map." The map is shown, as is the lever system, worked by a man. Another sits at a desk. Views of the track and trains are taken from the cabin window. The camera pans across views of Brighton from the track.

"February 6 1938. The first electrically powered train to travel into Littlehampton." The train pulls up to the station. Several men stand on the platform. The camera turns in a continual shot as the train passes by. Passengers alight. Men take photographs of the driver and train. "Good naturedly leading motorman Pepprell faces the cameras." The driver is seen in a head shot wearing a hat reading "motorman". Further footage of the train in the station and men wearing overcoats on the platform follow. "The return trip, and thus the trials continue." The train pulls out of the station. "May 22 1938 saw the first passenger-carrying electric train to Bognor Regis." The 2103 stands at a station. The driver and guard are shown standing by the train. "These scene were obtained on the first trip." The trip is filmed from the window of a carriage, passing along the track over bridges and through the countryside to Barnham.

"Rebuilding Ford Bridge, part of the vast electrification." A man looks on at the construction site, where a steam-powered crane lifts sections onto the bridge. Footage of workers on the site follows. "April 23-25 1938. With the road closed 36 hours only, the old bridge was cut away and the new installed." Further scenes on the bridge follow. Canisters are shown in wait before workers cut sections of the bridge as sparks fly. Workers break for a cup of tea. "Prosaic but of vital importance, the signal cabins." A man emerges from a signal cabin at Lancing and stands at the top of the steps. Cyclists wait behind a crossing for the train to pass. Inside another cabin, a man works levers lined along the wall and writes in a logbook. "Promoting greater safety, bridges are replacing road level crossings." Gates swing open to let a car pass. A train runs underneath a large modern bridge. A porter mans the level crossing from a small shed. A foot bridge links two sides of a railway track

"Freight:" "Transport of market produce. This special fruit train operates daily." At Worthing station men pass baskets of fruit from a truck into the train. "Picked at 11 am these perishables will be at London Markets at 2.30 pm. They are taken from the train to Covent Garden market. A steam-powered freight train passes under a brick-built bridge. Scenes are filmed with the driver up front. Two freight carriages are joined. The train is filmed moving away from a low angle by the track. "For long freight runs S15 class." "136 tons of metal!" The steam-powered Southern 836 passes by along the track. E4 class for local workings 60 tons." The Southern 2500 is shown from multiple viewpoints. "E2 class 86 1/2 tons." The Southern 2436 moves along the tracks, pulling wooden freight carriages. 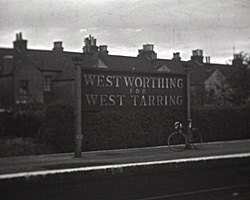 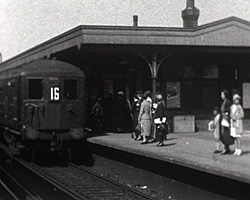 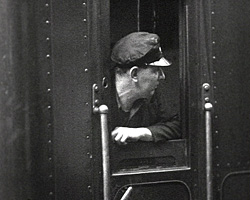 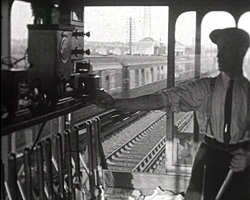 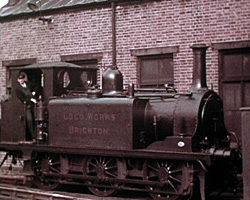 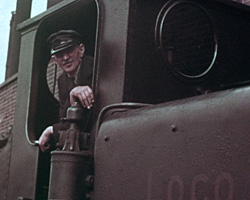 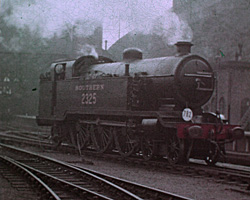