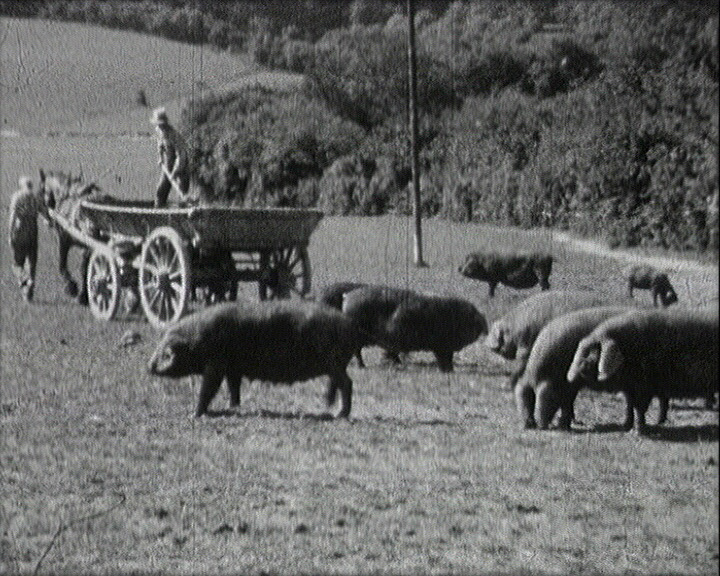 A combination of manpower, horsepower and modern machinery work the land of Elsted Manor Farms Ltd. A wide range of farming activities are filmed - sowing, harrowing, potato riddling, fertilizer ploughing with nitro chalk, haymaking, threshing, rick-builiding, erecting haystacks around metal tripods, sheep-dipping and milking. The daily task of feeding and herding the animals is also captured - pigs, hens, sheep, horses and long-horn and Ayrshire cattle occupy the land. The division of labour on the farms produces general farmworkers and specialized labourers - a cowman, poultryman, pigman, carter, horseman and thatcher carry out their tasks. They are aided in their work by traditional horse-powered equipment and by modern machines, including a gyrotiller hired from Arundel and an Allis Chalmer 'B' tractor imported from America. Some of the senior members are joined on the land by their families. The farming community comes together for a hay gymkhana - one of the stalls at the ground encourages the consumption of milk. The film closes with a panoramic shot of Elsted from Beacon Hill, illustrating the extent of the land under the auspices of Elsted Manor Farms Ltd.

This film covers an interesting period in British farming - it was a transitional period in which traditional horse-powered farming activities were replaced by machinery and technology. The transition was a gradual one - until the Second World War, an event which necessitated government support, it was only the more progressive farmers who adopted machinery. The Second World War also had a secondary effect on the farming landscape - male farmworkers joined the Armed Forces and were replaced on the farms by Land Girls. Other amateur films held at Screen Archive South East which illustrate farming during this period including In England's Garden (1930s), The Wheat Harvest (ca. 1935) and In The Garden of England (1938?).

Governmental intervention in agriculture during the 1930s included schemes aimed at stabilizing the milk market and ensuring the safety of consuming the beverage. Dairy farming soared during the 1920s and 1930s, producing a milk surplus which compounded the general depression being experienced in farming. Consequently, in 1933 the Milk Marketing Board was established in an attempt to stabilize the market. The marketing of milk itself was an important activity - people (especially schoolchildren) were actively encouraged to consume the drink, as evidenced by the posters on display in the film at the gymkhana's 'Milk Bar'. The success of this marketing was largely dependent however upon the message that milk was safe to drink. Bovine TB was a significant problem during the 1930s - 4,000 of the 50,000 cases of human TB in Britain were caused by the Bovine TB bacterium, resulting in 2,000 deaths. Contaminated milk was the primary culprit - it not only carried Bovine TB but also Typhoid Fever, Diphtheria and Brucellosis. The scale of the problem led to the introduction of pasteurization and animal testing during the 1930s, as illustrated in the film by the signage on the EMF milk delivery van. The issues surrounding milk can be seen in two films housed at Screen Archive South East, namely Do You Take Enough Milk (1944), an official film which publicizes the importance of drinking milk and A Bottle of Milk (1947) which follows the story of milk from the cow to the consumer's doorstep.

This autobiographical booklet by W. Lory Hosking, who is featured in Elsted Manor Farms (1932 - 1948), forms part of the "Farm Diaries of Fentongollen, Merther" collection which is housed at the Cornwall Record Office. The collection can be searched via The National Archives website.
http://discovery.nationalarchives.gov.uk/

The HAT Archive in Norwich was established in 1974 to preserve the best of UK advertising - in the 1980s it acquired the archive of The Dairy Council (previously known as the National Dairy Council) which traces the marketing of milk, butter and cheese from 1920.
http://www.hatads.org.uk/

The Museum of English Rural Life at the University of Reading houses collections which include items relating to hop-picking and the gypsy culture. The Museum’s database is searchable online.
http://www.reading.ac.uk/merl/

“Agriculture and domestic life are interpreted through exhibitions and displays". The Museum has a reference library "relating to vernacular architecture, building conservation and rural crafts and skills”. The Museum also houses the single-horse sweep which is filmed in [Elsted Manor Farms] (1932 - 1948).
http://www.wealddown.co.uk/

Notes and photographs - John Hosking, son of W. Lory Hosking who features in [Elsted Manor Farms] (1932 - 1948), has given Screen Archive South East notes and photographs relating to the film. These include names of participants and descriptions of the farming practices seen in the film. A pdf copy of the notes can be downloaded via this link.
Photographs may be viewed via the links below.
All of the items are held on file at Screen Archive South East.