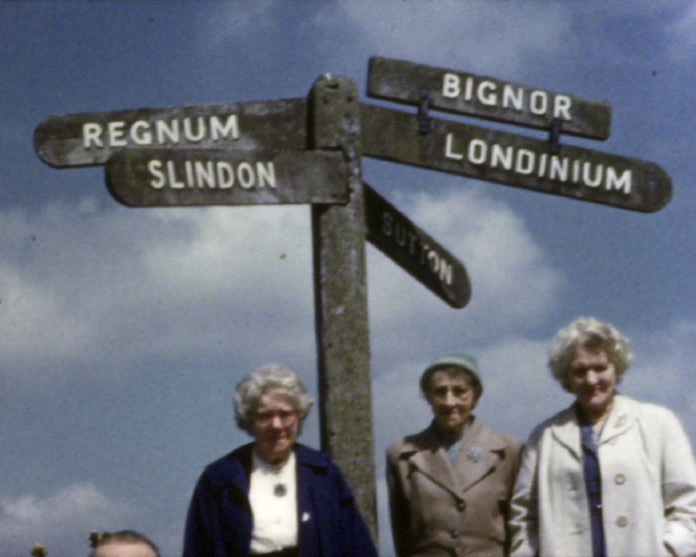 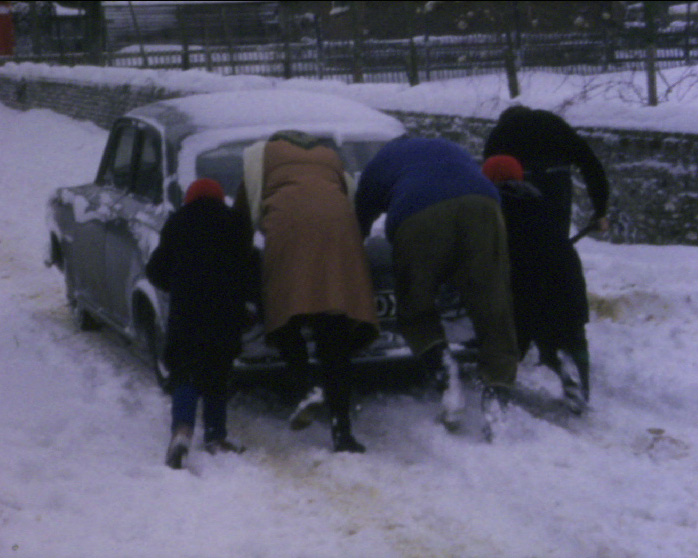 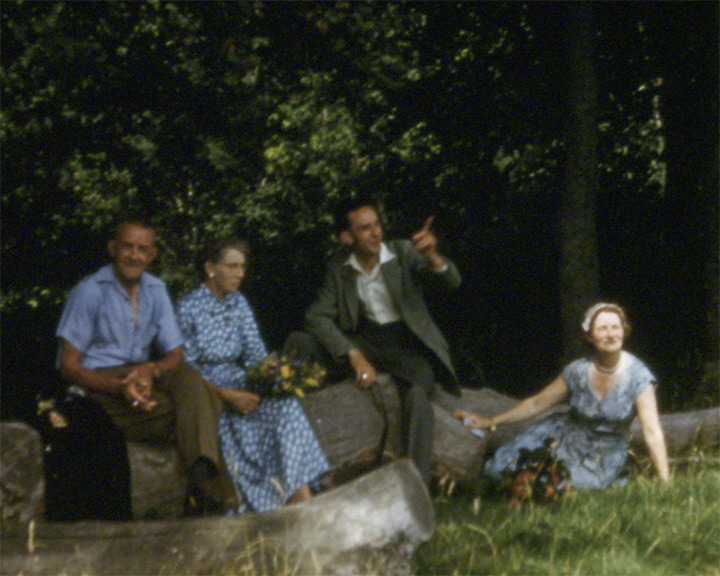 The film opens with black and white shots of cows grazing on the South Downs, a church and country house. A man polishes his motorbike and sidecar at a house in Park Lane, Slindon; he walks towards a tractor parked in the lane outside his house. A woman picks flowers in a garden, followed by shots from a moving vehicle traveling along a country road. Stop frame animation of biscuits on a plate, ingredients and kitchen equipment in a store cupboard and a kitchen dresser with a clock.

Fingerpost sign: "Bridle Road to Bignor", colour shots of a group of people walking along a track, sheep in a field and a woman picking flowers. The group sit on a log before wandering in a field. Title: "Ancient Britons still roam the Downs!; or do they?"; a man dressed as a caveman (?) approaches the group, the women laugh hysterically. Shots of the countryside and the group walking towards a row of cottages and a farm. Shots of the remains of a castle next to some woodland, a lake and Arundel Castle.

Close-up of a programme cover: "Cricket Match H.R.H. The Duke of Edinburgh's Team versus His Grace The Duke of Norfolk's Team"; shots of very large crowds spectating at the match, the match itself and a military band marching on the pitch.

Shots of people standing near a signpost: "Regnum, Bignor, Slindon, Londinium"; a man shifts a log to sit on; the group pose for the camera. More shots of a cricket match and players relaxing. Shots of Chichester Cathedral spire, followed by a landscaped garden. Shots of a fairground at night; the rides are illuminated. Shots of the moon, a dog on a lead and a speedboat: "Tiger". Shots of Bosham Harbour and a group of people at home in a garden eating tea; a woman takes washing off a line. Dark shots of people walking in a wood and a child and adults taking it in turns to ride a horse. Shots of the group leaving a house in Park Lane, Slindon; a car reverses along the road. Shots of a couple sitting at a table eating tea. Stop frame animation of the tea table and a man pretending to eat a mouse. The man lights a cigarette and a woman arranges posies of flowers.

Shots of a snowy Park Lane, Slindon and the front of the house followed by general shots of Slindon and surrounding countryside, including St. Mary's Church. A group of people push a car along a lane. Back at the house, dark shots of people standing in the garden, the snow has cleared and there are shots of Molland, Devon, including the London Inn and Church; a woman feeds birds. Brief shot of the front of the house in Slindon, followed by dark shots of a military parade on a parade ground; retired servicemen march in the parade. A large group of spectators are gathered to watch. The film cuts to scenes from a wedding; dark shots a bride and groom and wedding guests after a ceremony.

This section opens with black and white shots of a lady walking in a garden and wheeling a bicycle. General shots of the garden, including birds [break]. Colour shots of military helicopter and military maneuvers [Aldershot]?, including a controlled explosion. Another military parade is filmed, possible taking place at a country show. Shots of show jumping and hunting displays; heavy horses pull a cart [break]. Dark shots of a cake (?) and two people sunbathing on sun-loungers in a garden; close-up of flowers [break]. Dark shots of man and a woman in a garden; a cat rolls in the sun. A group of people walk along a street and a woman plays with a cat. Shots of two men gardening, followed by two women walking down some steps in front of a large porticoed building. Shots of squirrels in a park; a man sitting on a bench feeds them. A group of elderly people pose for the camera. Shots of the garden and cat, followed by a woman looking in the window of a hardware shop. Brief speeded-up shots of the sun setting. Shots of a couple gardening, followed by the same couple looking at a photo album. Shots of a family standing outside a house and brief shots of a woman walking on a beach.

Dark countryside shots, followed by the house and garden at Slindon, close-ups of bees and butterflies. A bird pecks at a piece of bread on a bird table, dark shots of a garden (?). Brief shots of a house interior [break]. Shots of a garden and house, a woman smells the blossoms [break]. Very dark shots of a house and garden and lights at Southsea (?), followed by shots of children riding on a carousel, a polar bear and children riding on other amusements at Chessington Zoo (?). Shots of other zoo animals including monkeys and penguins. Shots of two woman standing on top of Beachy Head, shots of the sea and lighthouse below. Shots of a reservoir with sailing boats and people exploring Leonardslee gardens. Shots of a military parade on a parade ground, followed by brief shots of Bramber Castle and St. Nicholas's Church. Title: "The End". 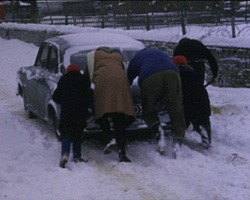 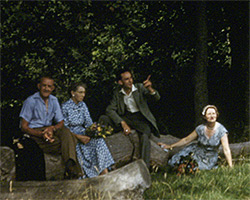