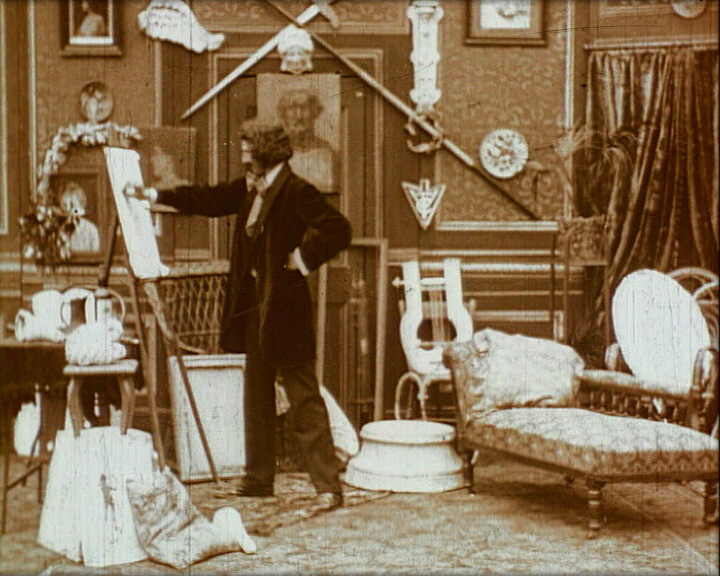 A frustrated artist stands at the easel in his studio, ripping up each fresh painting attempt and drinking copious amounts of alcohol. He lies down on his chaise longue where he promptly falls asleep, oblivious to the man who enters the room to find him asleep with a near-empty bottle of alcohol - the man leaves with the artist's tankard in hand. A superimposition marks the transition from the 'real world' to the 'dream world'. In his dream, the artist attempts to paint various human statues in a garden setting - he is shocked into desertion however when one after another come alive in front of him. The artist kneels before the beauty of the final statue he comes across - she mocks his praise however, pouring liquid over his head from a jug. Back in the 'real world' the artist is awoken by the man pouring water over him from the borrowed tankard. As the artist sits shivering on the chaise longue, the man takes a swig from the bottle of alcohol.

The London-based Warwick Trading Company was one of Britain's biggest production and distribution companies in the early 1900s. Under the guidance of its American manager Charles Urban (who left in 1903) it gained a reputation for quality actuality films and for distributing the work of cinematic pioneers George Melies, Lumiere, G. Albert Smith and James Williamson. In January 1906 the Warwick Trading Company merged with the Autoscope Company - the joint-company, under the management of Will Barker (until 1909), became known for lavish dramatic productions.

The American Film Institute (AFI) situates The Artist’s Nightmare (1908) as one of the twenty films produced by the Warwick Trading Company in 1908, although no information is known about the personnel involved in its making. The film however exhibits a knowing usage of professional cinematic practices - the static camera, use of studio locations, basic narrative, and highly gestural acting style were all typical of the time, determined by both technical limitations and accepted standards. What is of interest however is the film's use of trick photography to segue the 'real' and the 'dream' worlds, suggesting it was made by a film-maker who was experimenting with the possibilities of the relatively new medium - the technique of superimposition was one method employed to differentiate cinema from theatre.

Screen Archive South East holds copies of selected films by Hove pioneers G. Albert Smith and James Williamson, which can be viewed at the archive on request. The archive also houses various early American silent films including [Kidnap Western] (1900s - 1910s?) and Motor Bandits (1912); the latter film demonstrating how filmmaking had progressed in the years following The Artist’s Nightmare (1908) - the camera is no longer static, much of the filming takes place outdoors, the narrative is lengthy and developed, and the film is of a definable genre.

This five volume series provides a history of early cinema in England dating 1894-1901. Copies are available at the BFI Library.

This book offers a history of British film and cinema dating 1906-1914. It is one in a series of books written by Rachael Low which cover the years 1896-1939. Copies of the books are available at the BFI Library.

"This book is intended as a researcher's guide to the moving photographic images produced during the so-called 'silent period'." The book offers information on the history of silent cinema, on techniques employed, and on the work undertaken by film archives. Copies of the book are available at Screen Archive South East and at the BFI.

The American Film Institute's (AFI) catalogue of silent films references the films produced and distributed by The Warwick Trading Company in the 1900s.
http://www.afi.com/members/catalog/silentHome.aspx?s=1