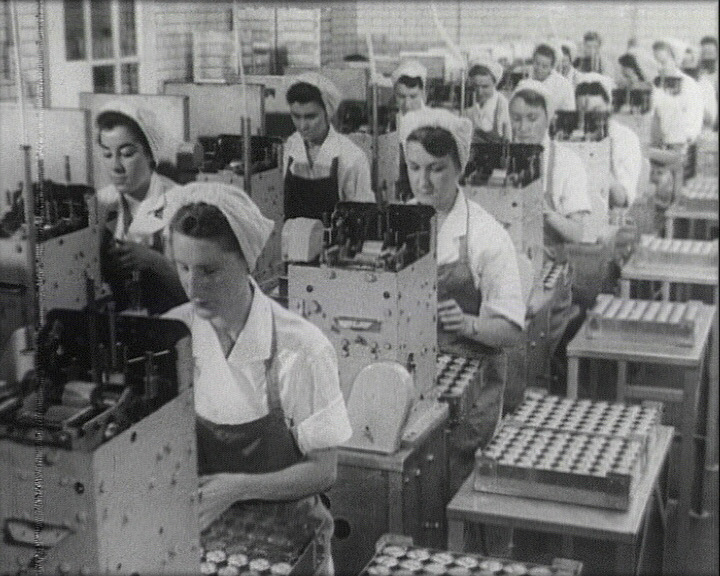 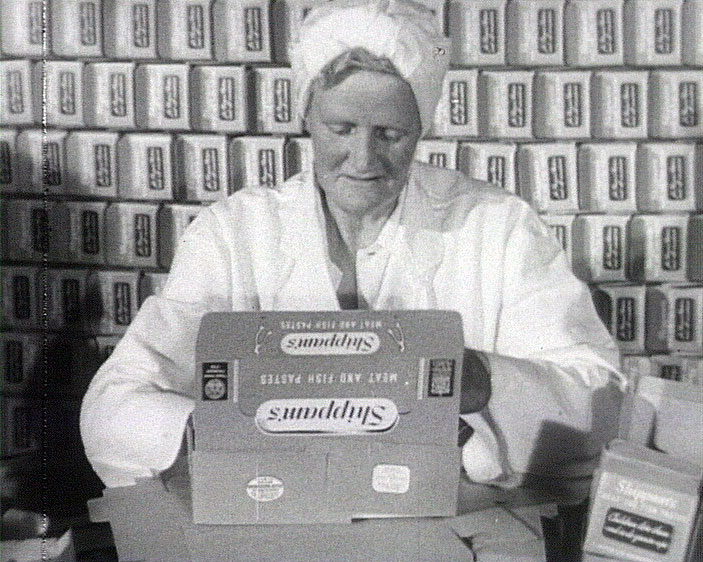 The narrative begins by considering the history of food and the modern kitchen and the importance of using quality ingredients when cooking. The kitchens of Brighton Pavilion are used as an example against the modern factory at Shippam Family Factory in Chichester.

The location moves to the interior of Shippam’s factory in Chichester as the narrator explains that the best ingredients are sought from all over the country.

Fishermen catch pilchards off Cornish coast at night - hauling in nets. The narrator explains the hardship of the weather out at sea bringing their catch back to the port of Newlyn, near Penzance.

At a free range chicken farm in Sussex a large flock of chickens run around an open field.

North Sea fishermen off the Scottish coast catch lobster and crab - a fisherman 'clips' lobsters’ claws making them save to handle for live transport. Further shots of the Cornish fishermen unloading their catch; the pilchards are packed with ice and loaded onto trucks in large Shippham Co. crates. The crabs and lobsters are later unloaded in Burnmouth, Scotland.

Young turkeys at a farm in Chesham, Buckinghamshire - hatching in an incubator, in a cage, then at 10 weeks old put outside as free range hens.

In Ireland, a salmon fishermen’s catch is packed then transported by truck and an Air Lingus Bristol 170 Freighter Mk.31E aircraft [EI-AFQ] to Chichester. Teams of men lay nets in the estuary and haul their catch.

The produce (uncooked poultry) arrives at the factory and is unpacked. Later the Shippam's glass jars are unloaded from large crates marked "This case is the property of Rockware Glass Limited. Greenford, Middlesex" to seam the jars.

Inside the cooking room, chickens are prepared and placed in the steaming machines. Mr Chalham shown overseeing the chicken cooking process.

Similar scenes in the fish-cooking room where Mr Gardner overseas the cooking of shrimps and salmon, and the meat room where a man removes cooked tongue from a large pan. Hams and other meats are prepared, cooked and checked. Pilchard and tomato paste is mixed and put through a mincer. The glass jars are cleaned in a machine. Visitors to the factory watch the jars being filled and sealed. The filled jars then go through a heat sterilizing process.

Bacteriologists and chemists check quality control in a laboratory. Rows of women operate labelling machines and assemble boxes. Visitors take wishbones from large piles at the end of the factory tour. Several members of staff are named throughout the film as they oversee a variety of production areas.

Visitors to the factor are give a wishbone from one of the discarded poultry carcasses. Steel tables are shown to visitors with piles of wishbones on top.

A final shot of the fishermen heading out to sea as the process starts over again, with the caption intertitle: “And so the Shippam Tradition continues - at Chichester since 1750”. Film fades to black. 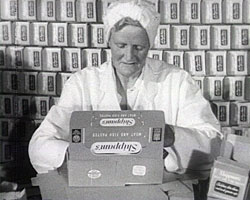 In late 1952 Shippam Ltd started conversations with Associated British Pathé Ltd regarding the making of A Family Tradition (1954). British Pathé provided a company with a treatment for the film, but negotiations between the two ended abruptly soon afterwards. Instead, Shippam Ltd commissioned Anglo-Scottish Pictures in January 1953 to make the film, based on British Pathé's original treatment. The film's total production cost in 1953 was £3,700, with an additional £500 being spent on prints (Shippam chose to make the film in black and white based on the extra cost that would be incurred with colour). A Family Tradition (1954) was exhibited through libraries and road shows, and it was estimated that by 1958 a quarter of a million people had seen it.

A Family Tradition (1954) emphasizes the importance of experience and the commitment of the staff at Shippam Ltd. It was a family-run company which prided itself on its family character. Like the company's owners, families worked at the factory through the generations, hence the film's title A Family Tradition. Thus workers are personalized in the film; they are named and shown to be at ease, happy in their work, and part of a community. The film also stresses the fact that the ingredients for Shippam's products come from every part of Britain, suggesting that a united effort was producing food for families from across the nation.

Screen Archive South East holds a large collection of Shippams advertising films, including Shippam’s Guide to Opera (1955) and Shippam’s Tattoo (1958). The Archive also houses several films which record factories across the decades. These include A Visit to Peek Frean and Co. Biscuit Factory (1906), Sir Stafford and Lady Cripps visit aircraft factory during the Anti-Scrap Campaign (1943?) and [The Dennis Factory and their Products] (1968?).

The collections span thousands of years of human history - from Prehistoric stone tools to protest banners from the 1990s. Our social history, archaeology and geology collections catalogue the history of the district and directly connect us to our ancestors. The collections tell the big stories of invasion and immigration, as well as the individual stories of local heroes and villains!. The musuem collections can also be searched online, through the website.
http://www.thenovium.org/

WSRO collections via The National Archives

Grieves, Keith. "'There are times when we would all prefer the factory life': letters from the trenches to the Shippam works in Chichester during the First World War." Family and Community History(2003), 6(1): 59-71.

This article looks at some of the letters sent by soldiers in France to their employer during the First World War.
http://www.maneyonline.com/doi/abs/10.1179/fch.2003.6.1.006