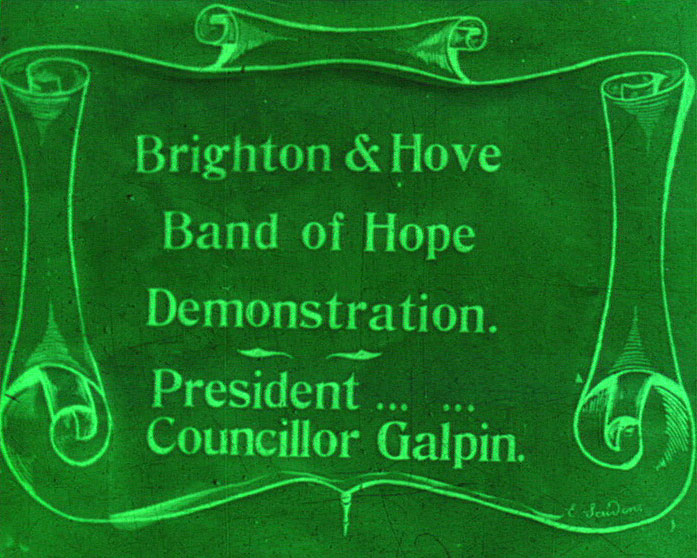 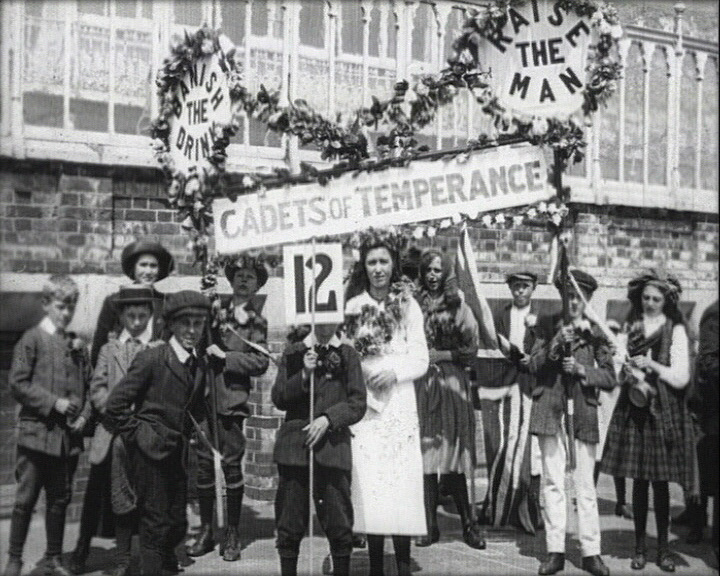 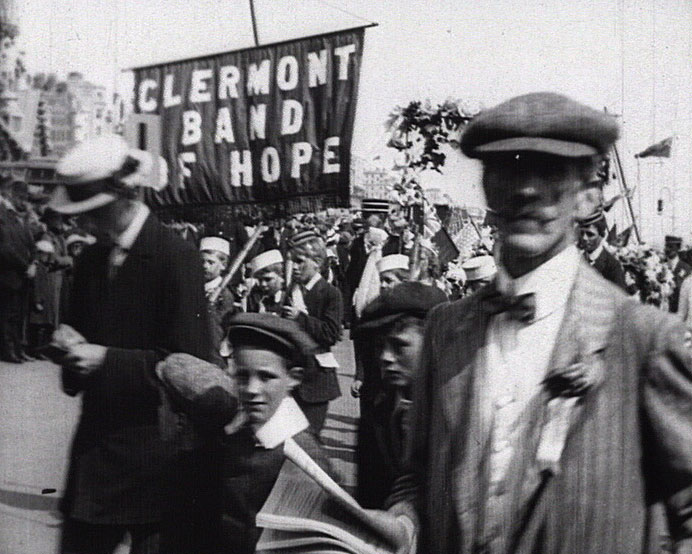 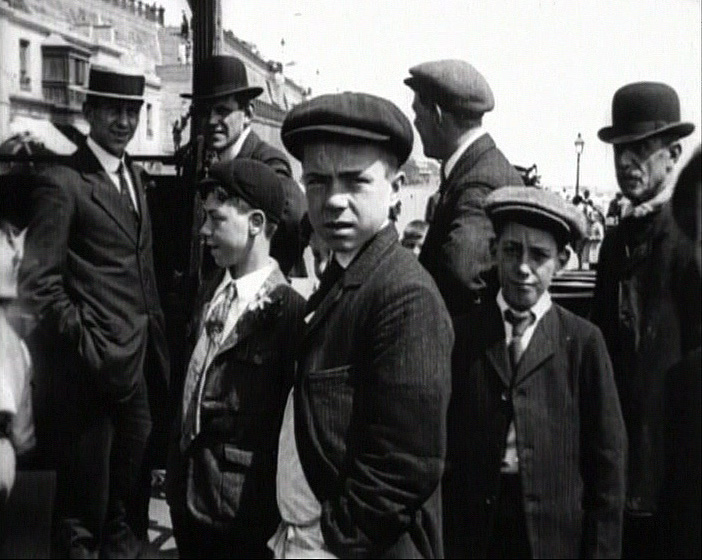 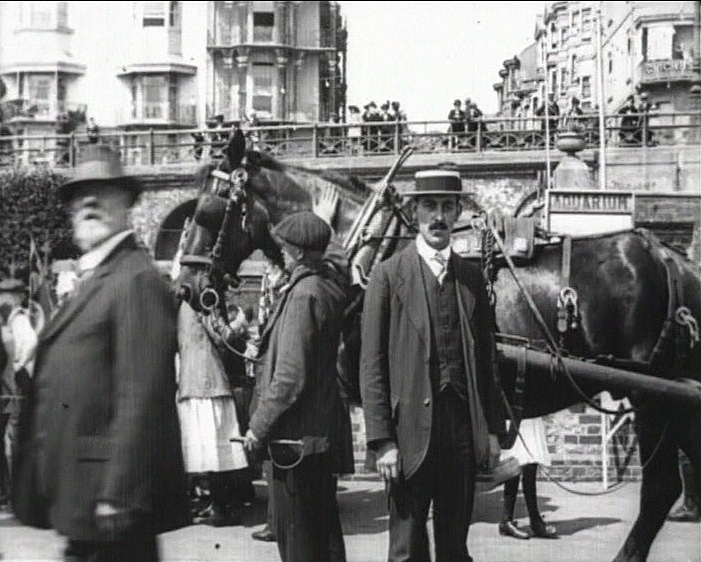 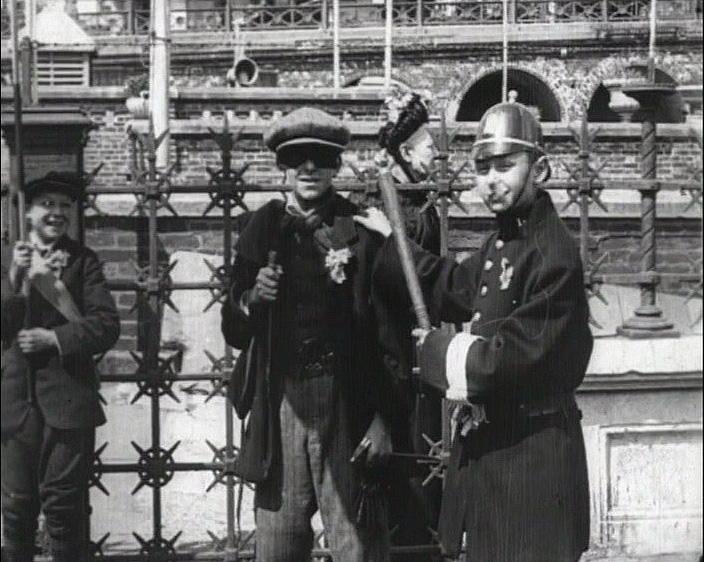 “Brighton and Hove Band of Hope Demonstration. President ... Councillor Galpin.” Mounted police escort the demonstration along Marine Parade past the Aquarium clock. Many demonstrators carry embroidered banners; one reads ‘Clermont Band of Hope’. Young boys wear ‘Cadets of Temperance’ uniforms and carry replica rifles, the girls wear white dresses and carry flowers. A large group of children carry a long framework covered with flowers: the ‘Garden of Temperance’. Crowds of onlookers line the street. Groups of demonstrators pose for the camera along the seafront, some with a horse and cart, others on foot. An intertitle introduces “Cliftonville 14”, a group of young demonstrators hold a ‘Cadets of Temperance’ banner. There is a close-up of Sergeant Lacey, the Procession Marshal, on his horse. Further scenes of the demonstrators along the seafront, many with horse-drawn carts adorned with banners denouncing the drinking of alcohol. The final scene shows a young boy dressed as a policeman attempting to arrest a boy dressed as a robber. 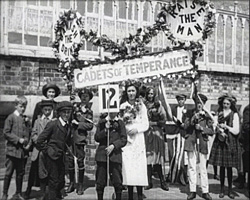 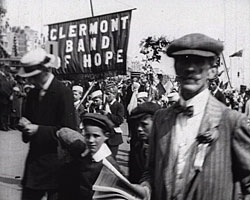 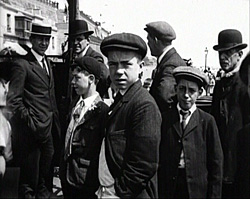 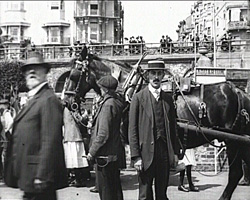 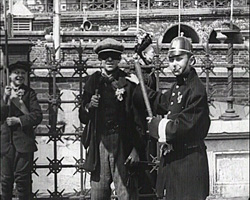 The British Association for the Promotion of Temperance was formed in 1835, believing that alcohol was the primary cause of social and criminal behavior. In 1847 the Band of Hope (temperance organisations for children) was founded. Children as young as six years old could enrol. Bands would meet weekly to hear lectures, sing, play music and participate in other activities, such as marches seen here in this film. With the growth of the railways, local Temperance Societies would often organise excursions for the children to seaside resorts.

Demonstrations as the one in this film were staged in the hope of attracting new members to fight the cause against the evils of alcohol. The scenes along the seafront in this film take place in front of the pubs and off-licences located under the arches; advertisements for whiskeys and ales can clearly be scene, forming a pertinent backdrop to the demonstration. Local groups seen in this film include the Cliftonville Band of Hope; Cliftonville has now been absorbed into present-day Hove.

Other examples of demonstrations on the streets of Brighton (though for a different cause) include the political demonstrations which appear in Ernie Trory’s collection of films, [Sussex Demonstrations and Advert for Daily Worker 1938; Sussex 1939] (1938; 1939).