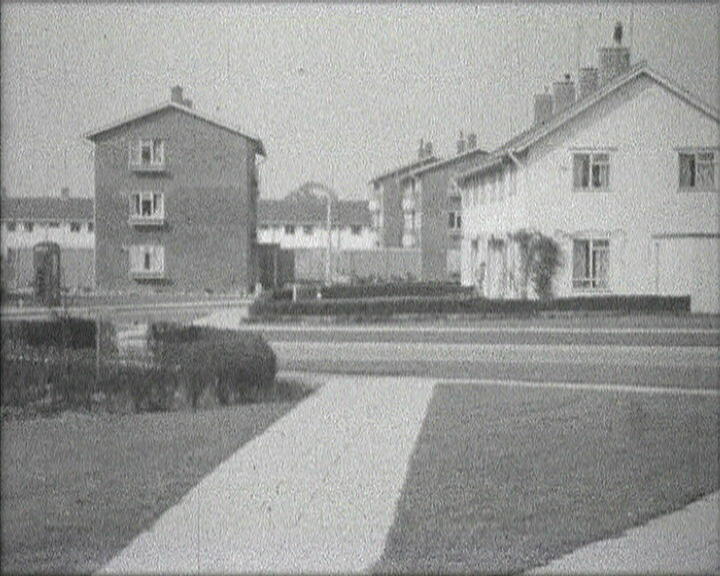 The film opens with photographs of various settlements and with a reconstruction of a performance by a male Victorian drawing room singer. Prior to the New Town being built, a lack of adequate facilities forced residents' meetings to take place in the cramped living rooms of private homes. Work is underway on building sites across Crawley New Town - completed buildings include modern factories, houses and schools. Evening entertainment is represented by neon signs advertising the Odeon Cinema, milk and Coca-Cola. An exterior shot of the Embassy Cinema during the day is followed by images of the county library, housed in one of the town's community huts. Crawley Football Club play a soccer match and young boys dig a hole with spades loaned to them at the adventure playground. A town meeting about 'The Future' takes place at the community hall on West Green Drive. Some of the local clubs are filmed - teenage boys play table tennis and snooker at the games hall, couples practice ballroom dancing and an amateur dramatics society rehearses. The Crawley Carnival brings the whole community together - a Royal Marines marching band leads a parade of fancy dress entrants and floats along the High Street. A model of the proposed Crawley Technical College is filmed, bringing the film to a close.

A PDF file of the accompanying script is available. See the 'Related Resources' section to access this document and further resources. 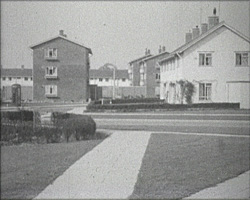 A New Town Story (1955) was made by the Crawley Film Unit, the film-making arm of the Crawley Film Society. The Film Unit was established in 1954, making 8 or 9 films before it disbanded in 1963. The amateur filmmaking society re-emerged in the late 1960s in the guise of the Crawley Cine Club, a body which later focused its attention on video formats. Crawley has therefore had a fairly strong post-war tradition of amateur filmmaking. The majority of the films produced by the original Crawley Film Unit were fictional - A New Town Story (1955) combines fiction with actuality footage. It is a lengthy film which has been edited to convey a narrative - screenings (primarily for local film societies) were accompanied by an explanatory commentary. The film has an immediacy to it whereby the local film-makers capture a New Town in its infancy, providing a record of buildings and a community which no longer exist. Screen Archive South East also houses films which record life in Crawley before it became a New Town - these were filmed by local amateur film-makers Moses and Percy Nightingale and include Crawley Events (1928 - 1937) which shows leisure activities in the town including Crawley Fair and a church parade.

The New Towns Act of 1946 designated Crawley as one of the six locales outside London which would serve as a residential and industrial area for the Londoners who were being encouraged to leave the capital. The 'Master Plan' for Crawley New Town was unveiled to the public in 1951, detailing the development of a purpose-built town on a 6,000 acre site. The details of the Master Plan reflected upon a new ideology in town planning - Crawley was to comprise of a town centre encircled by nine residential neighbourhoods (each with its own schools, shops, church, playgrounds, etc) and an industrial area. Provision was also given for large-scale population growth. The predominance given to the neighbourhoods led to the formation of a Community Association which went from strength to strength in the early years of the New Town. As featured in A New Town Story (1955), the Community Association encouraged residents' meetings and the establishment of clubs and societies within the community. The Master Plan's intention for a community centre was not however realised by the town planners - it was instead built by West Sussex County Council in 1954. Indeed, the Master Plan was never fully realised - many of the facilities, including an extensive school infrastructure, were not completed and the community-driven town, as portrayed in the 1955 film, became increasingly less evident as Crawley grew at an exponential rate. Screen Archive South East film South Eastern England (1968) illustrates the extent of development in the area - it contains aerial shots of Crawley and Gatwick Airport. In Lambeth 1958 (1958) the Bishop of Mombasa acts a the Vice-Chairman of a committee looking at the spirit of community in the New Towns - the film contains some images of one of these towns (possibly Crawley). It should be noted that the building of New Towns was not limited to the area surrounding London. For example, Screen Archive South East houses the film Cumbernauld New Town, 1956-1977 (1956 - 1977) which records the development of a New Town in Scotland.

This book was produced following a meeting in which the progress made in Crawley during 1954 and future developments were outlined. It covers a range of topics including education, health and housing, and contains relevant statistics and photographs. Copies of the book are available at Chichester and Worthing libraries

The book includes a concise history of film societies and cinemas in Crawley. Copies are held at West Sussex Record Office and Screen Archive South East.

A copy of this book is available at Crawley library.

Copies of this book, which features a number of archive postcards of Crawley, are available at various West Sussex libraries.

Copies of this book, which looks at Crawley town planning, are available at various West Sussex libraries.

Copies of this book, which details Crawley during the 1950s, are available at Crawley and Worthing libraries.

"This museum houses displays on life within the town and region from the Bronze Age to the present day, and includes artifacts from the important late Iron Age and Romano-British sites at Goff's Park and Broadfields." The Museum's photographic collection includes a pictorial review of Crawley New Town from October 1951.
http://www.crawleymuseums.org/

The East Sussex Record Office (ESRO) now based at The Keep, houses an archive of plans and maps of Crawley New Town. The ESRO collections are searchable online via The Keep Website.
http://www.thekeep.info/

"West Sussex Record Office collects and preserves the documentary and recorded heritage of the County of West Sussex." The West Sussex Record Office (WSRO) houses a collection of plans, maps and photographs of Crawley New Town (including official documentation from West Sussex County Council). The WSRO is searchable via the National Archives website and on the WSRO online catalogue.
https://www.westsussex.gov.uk/leisure-recreation-and-community/history-and-heritage/west-sussex-record-office/

"Princess Elizabeth makes tour of Crawley, Sussex and sees progress of satellite town" in this British Paramount News newsreel. The film record can be found on The British Universities Film and Video Council's News On Screen database.
http://bufvc.ac.uk/newsonscreen

Princess Elizabeth makes an official visit to the new town of Crawley in this British Movietone newsreel. The film record can be found on The British Universities Film and Video Council's News On Screen database.
http://bufvc.ac.uk/newsonscreen

Princess Elizabeth opens Manor Royal, the new main road running through Crawley's industrial area in this Pathé News newsreel. The film can be accessed via the British Pathé Website.
http://www.britishpathe.com/

This weekly local newspaper (previously called Sussex and Surrey Courier) is held on microfilm at Crawley Library (1939-) and Worthing Library (1954-1972).

A pdf copy of the original script that was read at screenings of A New Town Story (1955) can be downloaded via this link - it is also held on file at Screen Archive South East.
http://screenarchive.brighton.ac.uk/the-collection/crawleynewtownscript/

This is the website for British History Online, "the digital library containing some of the core printed primary and secondary sources for the medieval and modern history of the British Isles." It includes material from Victoria History of the County of Sussex Volume VI Part 3 has a history of Crawley New Town. Copies of the book are available at various East and West Sussex libraries.
http://www.british-history.ac.uk/