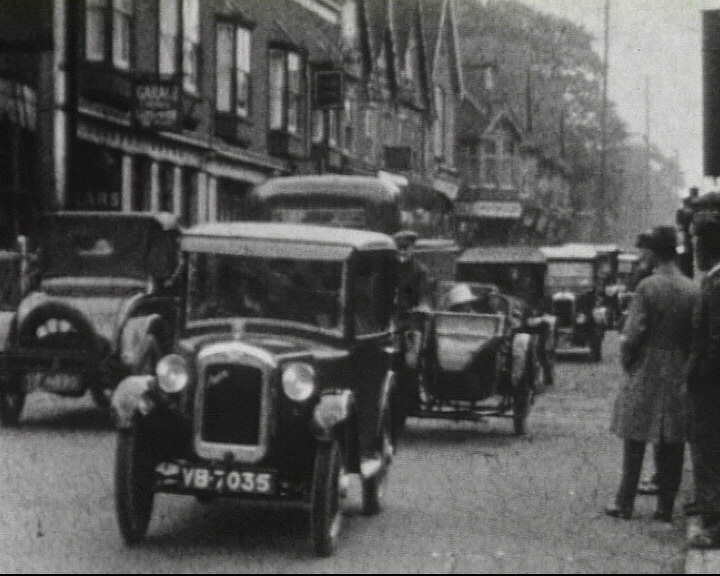 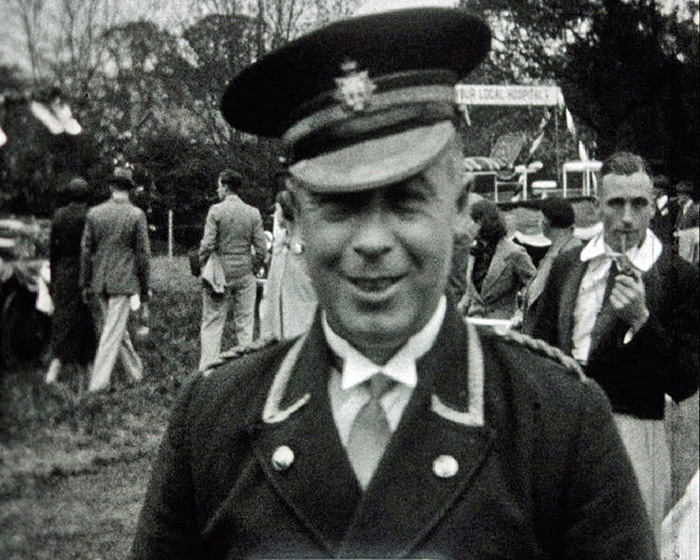 Horses, cattle and men gather at the 1928 Crawley Fair for a livestock auction. Marching bands lead representatives from the fire service and Salvation Army (?) in the Crawley Church Parade of 1929. On 1st August 1929 Moses Nightingale and his wife Ruth arrive by chauffeur-driven car to witness the opening of the town's new recreation ground. Large crowds surround and use the rides at the ground. Children play on a variety of swings as the cameraman films the frivolity from atop the large slide. Dr. Burn rides his bicycle on a residential street before members of the emergency services march in procession through a field during an ambulance dedication service. Brighton Road is busy with Sunday traffic - cars, motorbikes with sidecars, bicycles and pedestrians crowd the thoroughfare in the town centre. On 6th May 1935 a lengthy parade of floats, marching bands and children in fancy dress passes along roads (including Albany Road) adorned with bunting for the Silver Jubilee of George V and Queen Mary - members of the Nightingale family are seen sitting on, and walking with, the last horse-drawn float. Two years later Crawley residents parade to celebrate the Coronation of King George VI, and young children perform folk dances. The film ends with the written proclamation "Long May They Reign!" 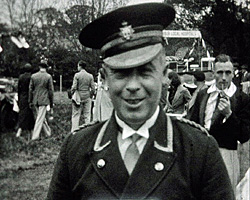 It is unclear exactly who filmed the individual events in [Crawley Events] (1928 - 1937), but there are three probables. The first is Percy Nightingale, son of Moses Nightingale. He was a keen amateur film-maker who made films of his family during the 1920s and 1930s. He was also 'car mad' and was probably responsible for filming the traffic on Brighton Road in [Crawley Events] (1928 - 1937). The second probable cameraman is Albert Jones, son-in-law of Moses Nightingale. He was an architect and often financed the making of the Nightingale films. The third probable cameraman, Lewis G. Ball, was a local photographer who is known to have been lent the Nightingales' camera for at least one of the processions included in [Crawley Events] (1928 - 1937). Processions offer the spectator moments of visual spectacle and have thus proved to be popular subjects for both amateur and professional film-makers throughout the decades.

It is interesting to note the presence of Moses and Ruth Nightingale at the opening of the Crawley War Memorial Recreation Ground. Moses Nightingale was a successful and affluent businessman who worked in the corn industry - he lived in Crawley and was a local philanthropist. The community of Crawley benefited from his generosity in 1929 when he donated £1,000 worth of playing field equipment to the new recreation ground. The moving images of that day in [Crawley Events] (1928 - 1933) therefore serve as a visual record of the culmination of his gift - not only does it film Moses Nightingale at the opening, but it also films the equipment being used by enthused locals. The event was also filmed in another amateur production called [Opening of Crawley Recreation Ground] (1 August 1929) which is also held at Screen Archive South East.

The Nightingale Collection housed at Screen Archive South East contains a variety of films shot by numerous cameramen (and women). Amongst these are family scenes such as [Local Scenes and Family Pictures] (1927; 1929) and Golden Wedding Celebrations at 'Hazeldene' (16 June 1931; 23 April 1934) - the latter film records the Golden Wedding Anniversary of Moses and Ruth Nightingale. Crawley & District Bowling and Lawn Tennis Club (1927 - 1928) features popular leisure pursuits and [Croydon Aerodrome. Margaret's Wedding] (1932; 27 March 1943) contains images of aircraft at the burgeoning airport in 1932.

This book of archive postcards features an aerial view of Crawley taken in 1929 - the recreation ground at West Green is visible in the top left of the photograph. Copies are available at various West Sussex libraries.

The West Sussex Record Office (WSRO) houses a collection of photograph albums, loose photographs and documents from the Nightingale family. In addition, the collection includes a CD-Rom which has been created by a relative, detailing the extensive family tree - it includes archive photographs and moving images of the Nightingale family. A copy of the CD-Rom is also available via the Screen Archive South East office, although advance notice would be needed prior to viewing it.
https://www.westsussex.gov.uk/leisure-recreation-and-community/history-and-heritage/west-sussex-record-office

West Sussex Past Pictures is, "the official database of heritage photographs, prints, drawings and paintings provided by local museums and the County Library Service." Photographs include ones depicting Crawley Fair and town bands from the 1900s to the 1930s.
http://www.westsussexpast.org/pictures/