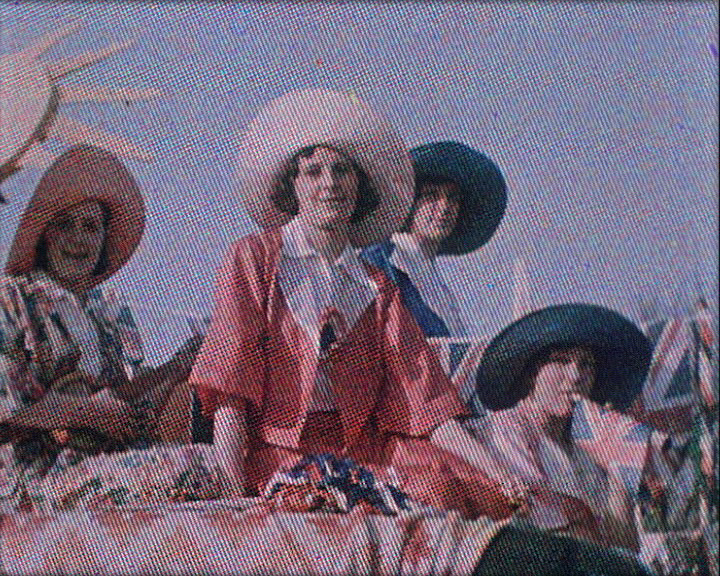 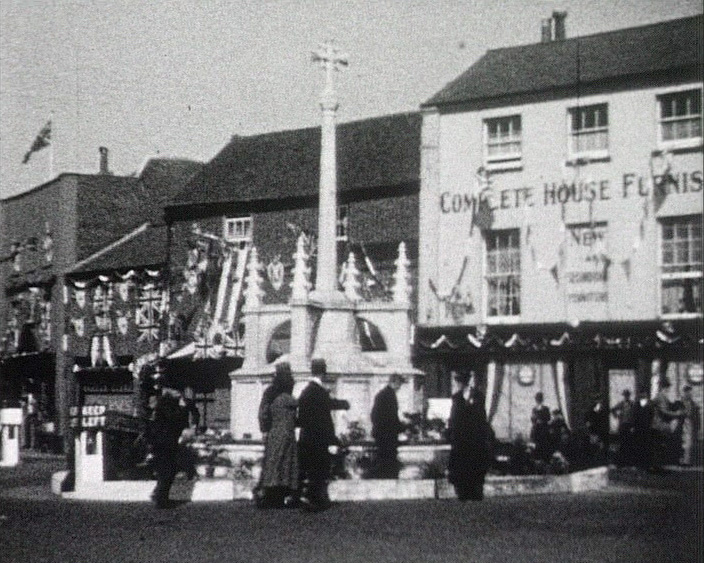 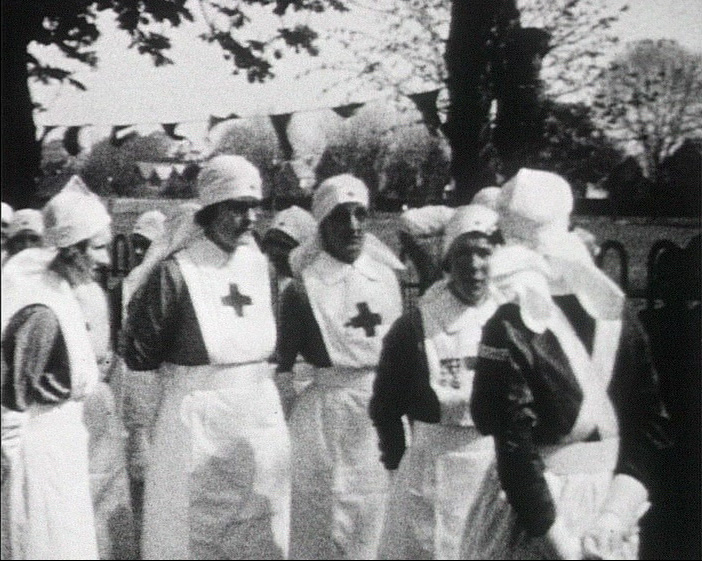 The film begins in black and white with general views of the Market Cross and Chichester town centre. Crowds and participants gather for the morning church parade. There is a military band, military officers, the Fire Brigade, nurses and an elderly war veteran with lots of medals. The parade begins, led by a marching band, the mayor, aldermen and other dignitaries. The procession makes its way along the crowd-lined streets. Amongst those taking part are choir boys, the fire service, military bands, scouts and girl guides. The parade is shown from several angles, in colour and black and white.

“Mayor and Corporation of St Pancras take Dinner to the Almshouses”

A small procession, led by a mace-bearer and the mayor, carries trays to the Almshouses. Members of the procession, all wearing red rosettes, pose in a group outside the almshouses before going in.

“The Afternoon. Sports in the Recreation Ground”

A variety of races take place including men’s sprint, an obstacle race, a sack race and one involving bobbing apples. There is a tug-of-war contest and a band plays on the green. More races are shown: the finish of the egg and spoon race is in slow motion, a skipping race and a tug-of-war contest are also shown. People in fancy dress try to ride their bicycles as slowly as possible. There is a barrel rolling race, musical chairs and a wheelbarrow race (blindfolded). The band walk about playing their instruments. There is a brief shot of the mayor and mayoress, then the Daily Mail ‘Push Ball’ competition begins: two teams of men push a huge ball around the green, at one point they go right into the crowd. The mayor and mayoress award prizes to the competition winners.

“Meanwhile the Children are Entertained in Priory Park”

A large crowd of children watch a clown. Others try to hook ‘fish’ from the ground with fishing rods. Two little girls take part in a magician’s trick. Children watch a puppet show with piano accompaniment, then walk across the green in pairs. There is a brief shot of the mayor and mayoress. A group of girls perform a ‘folk-type’ dance. There is a shot of several girls dressed up with flowers playing on swings and further scenes of children in the park.

Colourful pictures of the evening’s carnival procession show the vast array of decorated floats and people in fancy dress. There are clowns and pirates, horse-drawn floats and cars decorated with flags, bunting and flowers. There are horseriders and bicycles too. At the beginning of the procession, a band plays while the floats line up and leave one by one for Priory Park. The day ends with a firework display in the park. The finale being ‘God Bless Our King and Queen’ spelt out in fireworks. 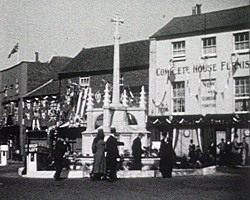 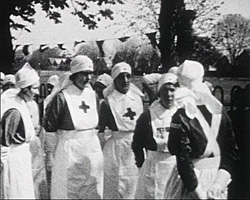 Chichester’s festivities, parade and sporting events recorded in this film were typical of the events organised in towns and villages throughout the country to celebrate the Silver Jubilee of King George V. Amateur cinematography was hitting a peak in the mid 1930s and such festive occasions proved exceptionally popular subjects for cine clubs and lone moviemakers alike. Amateur cine journals positively encouraged people to go out and film the Jubilee celebrations. The May 1935 issue of Amateur Cine World magazine carries an article describing how best to go about making one’s own Jubilee film. It insists that success can only be achieved if the film is a cooperative effort, being captured by several cameras and that this would best be achieved by working with a cine club: “[...] by interchange of film prints, brilliant and important records will be obtained.” Indeed, this particular film of the celebrations in Chichester follows, practically scene for scene, the outline suggested in the Amateur Cine World article. The Jubilee celebrations provided an excellent subject for experimenting with the relatively new Dufaycolor. Members of the Chichester Cine Camera Club have used it to optimum effect in this film, capturing the flag-adorned streets, lively carnival floats and the vibrant fancy dress costumes.

Description. This book has a section on amateur filmmaking in West Sussex. Copies are held at West Sussex Record Office, Chichester and at Screen Archive South East.

Brighton residents recount their childhood memories of the 1935 Silver Jubilee. Copies of this book are available at Worthing library and the University of Brighton.

The people of Sussex recount their childhood memories of the 1935 Silver Jubilee. A copy of this book is available at Lewes library.

The collections span thousands of years of human history - from Prehistoric stone tools to protest banners from the 1990s. Our social history, archaeology and geology collections catalogue the history of the district and directly connect us to our ancestors. The collections tell the big stories of invasion and immigration, as well as the individual stories of local heroes and villains!. The museum collections can also be searched online, through the website.
http://www.thenovium.org/

“The Record Office acquires, preserves and makes publicly available the documentary and recorded heritage of the county. The Picture Archive holds over 150,000 photographs and pictures showing West Sussex in the past.” The WSRO collections can be searched online using the National Archives catalogue or via the WSRO website.
https://www.westsussex.gov.uk/leisure-recreation-and-community/history-and-heritage/west-sussex-record-office/

The BFI Reuben Library in London holds various books and journals relating to the silent cinema era. The collections catalogue is searchable online via the website.
http://www.bfi.org.uk/archive-collections/searching-access-collections

“Make Your Own Jubilee Films” by Fred Watts (Production Manager for Pathetone Gazette and Pathetone Magazine). An Amateur Cine World article from May 1935 describing how the amateur film-maker should best go about producing a record of the event and celebrations.

The BFI Library in London houses a selection of periodicals relating to amateur film-making, including Amateur Cine World and Home Movies & Home Talkies. The magazines contain many references to cine clubs and societies nationwide.